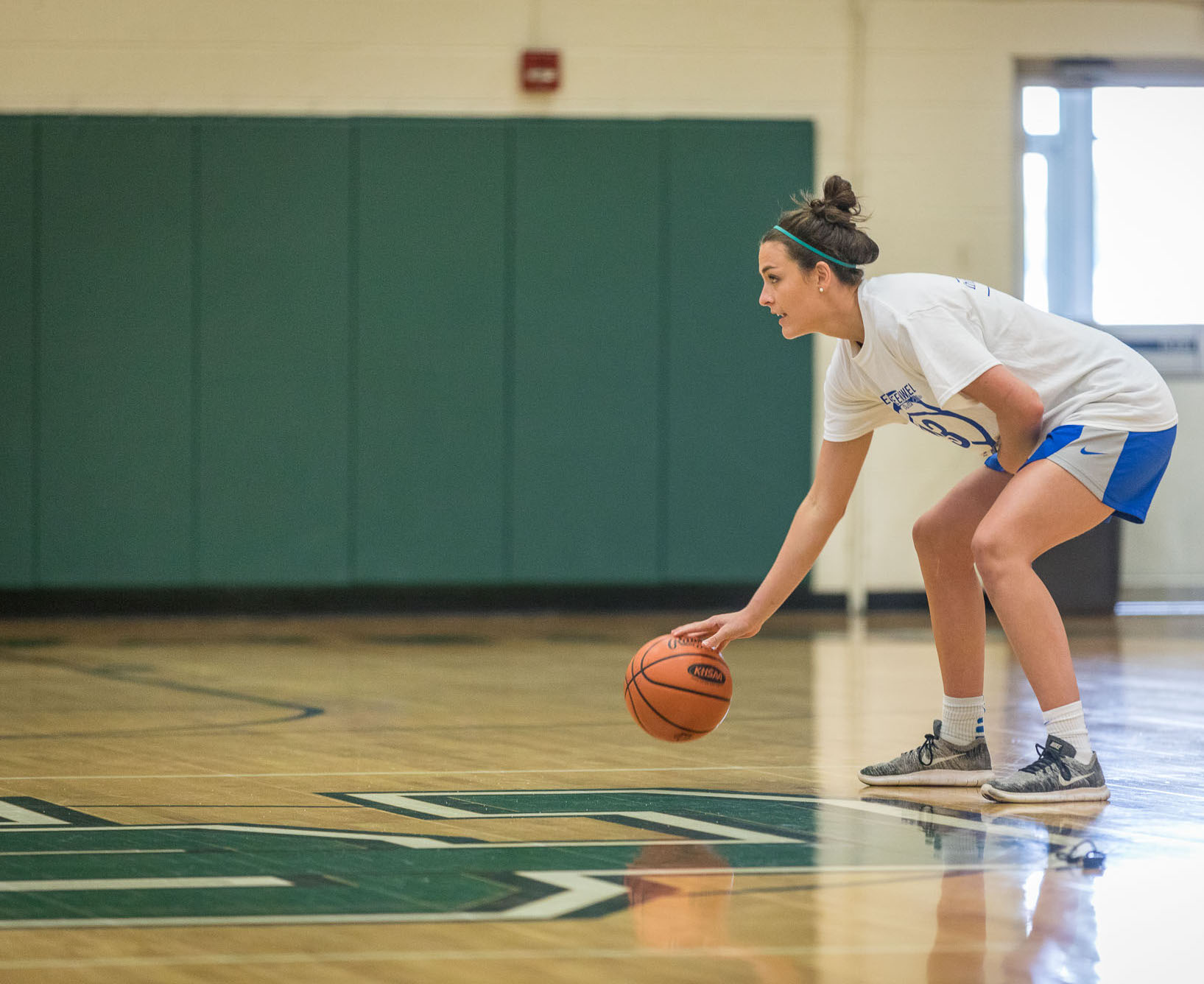 Aside from her 6 foot 1-inch frame, if you saw Becca Greenwell in her ponytail and athletic gear, you would view her as a regular Kentucky girl — probably because she is.

If you put aside the 17 3-pointers she shot in one game during her senior year at Owensboro Catholic, her eight 3-pointers that set a single-game record at Duke, and the fact that she was drafted this spring to play in the WNBA for the Washington Mystics, you would find Greenwell is indeed your average Kentucky girl.

She says it’s really hard to be away from her family, and she calls her mom at least twice a week, “We talk all of the time.”

During the rare moments when she gets to come home, she enjoys hanging out with her family and craves Big Dipper.

In between clinic sessions Saturday, a family friend actually brought Greenwell her Dipper “usual,” which consisted of a double-cheeseburger, tater tots and a chocolate shake.

Ever-conscious of her basketball training regimen, she giggled that she knew it wasn’t healthy, but it was a rare treat she enjoyed when she was home.

This summer, after graduating from Duke, Greenwell received an internship to work in Chicago. She used that time away as an opportunity to update her fans on the direction her life had taken in the last year.

Greenwell gave Owensboro Times permission to share an entry from her personal blog entitled, “Lost Puppy.” This transparent and comical entry allowed Greenwell to share some embarrassing and scary moments of being a small town Kentucky girl adjusting to a big city world. She also details her life after graduating from Duke, through surgery recovery and the draft process.

“No, I haven’t fallen off the face of the earth since graduating from Duke. And no, I’m not done with basketball forever. The past few months have actually been crazy full of life-changing events, big kid decisions, new experiences, and many fun stories along the way…

Where to begin…for starters I somehow managed to graduate from business school! Still not sure how that happened, but I’ll take it. My time at Fuqua was a whirlwind but can honestly say it was one of the best years of my life.

I’m not going to miss the work…but I’m going to miss all the awesome people I met along the way. Hard to believe I’m finally walking away from Duke with not only 1, but 2 degrees and so many amazing memories.

Also, in case anyone didn’t know shortly after the season I had a knee surgery to repair the annoying injury I was dealing with all senior year. The injury was called a “chondral defect” – which I hate telling people because no one knows what the heck that means, and I end up having to give the same long explanation over and over again. Please refer to Google.

Anyway, the surgery went great! It also happened to line up on the same day as the WNBA draft. So while I didn’t have the typical “draft day” celebration, I was happy to see my name pop up on the TV in the 3rd round to the Washington Mystics.

No, it wasn’t the best circumstances.. (i.e watching while recovering in my hotel room 4 hours post surgery and knowing I couldn’t even play this first WNBA season), I’m still so blessed the Mystics took a chance on drafting me regardless and I’m going to do everything I have to do to come back an even better player for them next season.

Playing in the WNBA has been a dream of mine since I was a kid and I’m not giving up on that now, I tell ya that!

So now what? I have a 9-month recovery, no more school, no more scholarship check to live on, no more training table every day… crap. When my family asked me my plan, my first idea I shot out was that I was going to be an Uber driver! Yes… a Duke graduate, business masters owning, WNBA draftee Uber driver. Heck, I bet I could get 5 stars and make a name for myself.

I was hype about this idea and honestly still may do it in the fall… but luckily another gig panned out in the meantime. I was lucky enough to snag a summer sports marketing internship with an awesome company in Chicago called Intersport. Ask me how I got it if you want to hear a funny story.

Anyways, yes it’s in CHICAGO! The Chicago. Population of 2.7 million Chicago. I moved to this beautiful, largely inhabited, crazy city just a few short days ago and as a small town kid from the good ole KY, let me tell ya, it’s been an adjustment. I wish people could hear what goes on in my head (especially those first few days) as I walk around this city because it would be pure entertainment…”

Greenwell recently wrapped up her Chicago internship and plans to move back to Durham, NC in the fall to resume working out.

She is currently in the middle of the third month of a nine-month rehab process, which she hopes to be medically cleared from by mid-January. Greenwell hopes to then take her game overseas for a few months before Mystics training camp starts in April.

Greenwell wore the number 23 throughout high school and college but does not think the number will be available with her new Mystics WNBA team. She doesn’t seem to mind though. She has a range of backup numbers in mind, and, it’s not really about the number on the jersey, it’s more about the dedication of the girl who’s wearing it.

To read more of Becca Greenwell’s adventures in the Windy City and see what happens next, click here to follow her blog.

Home » Sports » Becca Greenwell: The girl behind the ball