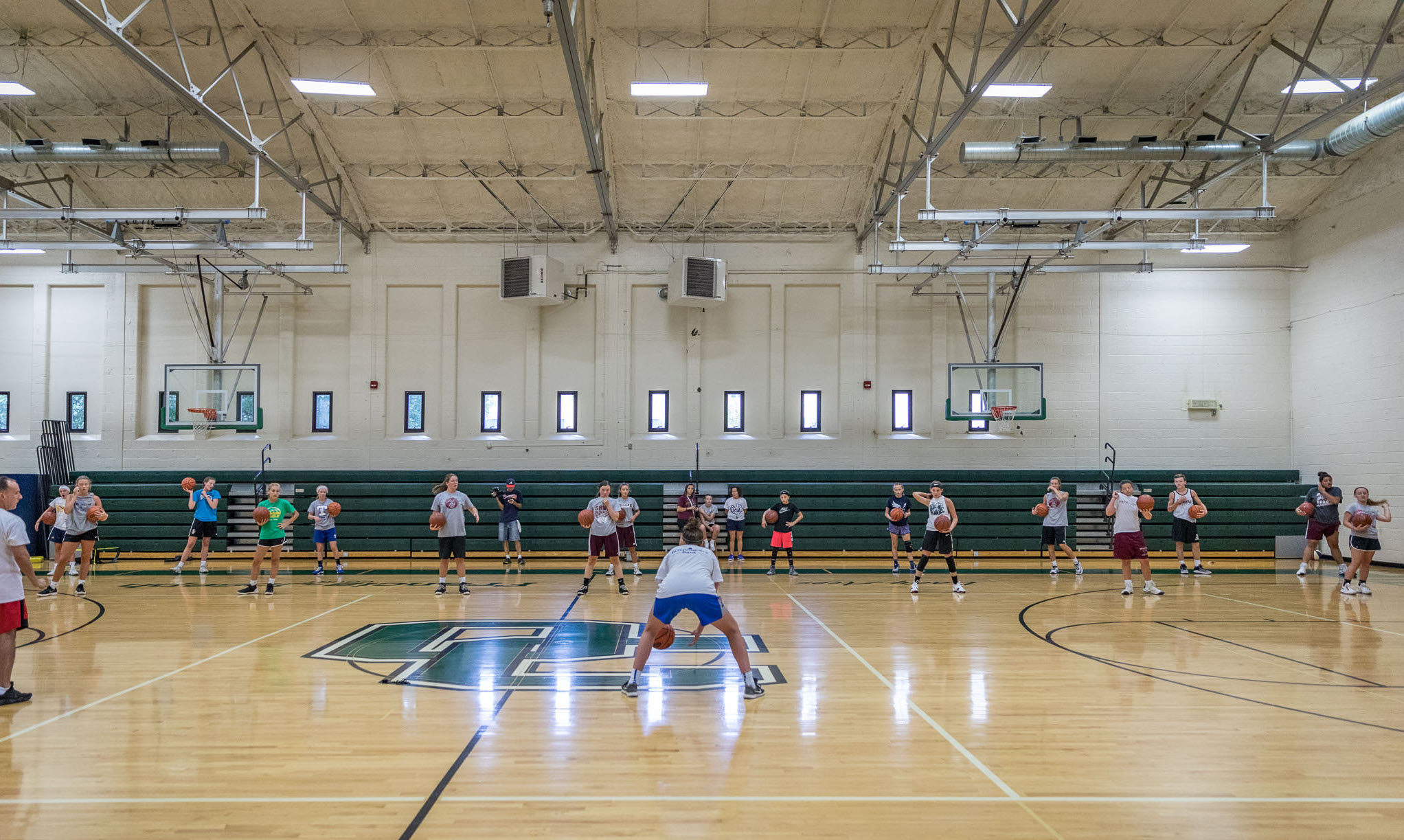 While numerous people in Owensboro were focused on the first Friday night football game match-ups of the season, many young basketball fans were anticipating Saturday morning, as their number 23 came back home to visit and share a few inside tips.

Owensboro Catholic alum, Becca Greenwell, came into town this weekend to host close to 75 young basketball players who signed up for the split clinic day.

The morning session offered a skills clinic designed for grades 5 – 8, while the afternoon session provided more advanced drills for grades 9 – 12. After each session, there was time for Q&A, and then Becca happily signed posters and basketballs and was available for pictures.

Haleigh Mayo and her mom Cassidy drove 4 1/2 hours from Arcanum, OH because, according to Cassidy, “Becca is one of her favorite players.”

Mayo follows Greenwell on social media and “loves her talent for the game.” Mayo said she and her mom made the trip because “I love the game and want to do whatever it takes to advance to the next level.”

While it was obvious by the attendance that Greenwell has gained popularity beyond Owensboro, there were some that came to support Greenwell that were not in need of skills drills.

Player Development Coach, Brandon Paquin, worked with Greenwell last summer and was happy to help work the clinic on Saturday. Paquin has been amazed at how willing Greenwell has been to put the extra work in to remain competitive, despite having five knee surgeries.

Paquin said about Greenwell, “Every dribble matters — every shot matters. That’s why she’s playing at the highest level.”

Owensboro Catholic Middle School coach, Trina Riney, who was there to assist Paquin and Greenwell, spoke of Greenwell’s tireless work ethic and passion for the game.

Riney said, “She has a competitiveness and a drive — a refuse to lose mentality. She’s a great spokesman to be around basketball and represent Owensboro and Owensboro Catholic basketball.”

Mark and Mindy Odom made the three-hour trip from Cookeville, TN, for the opportunity to visit with their former AAU (Amateur Athletic Union) Travel Team player.

Mark Odom, whose youngest daughter played with Greenwell, said they have known Greenwell, and her sister Rachel, since Becca was in the fifth grade. He recalled the many trips they took to meet the girls’ parents at the Kentucky-Tennessee line.

Odom said he and Mindy followed Greenwell to Duke and plan to continue following her as a Mystic. “I already got tickets bought,” Odom smiled.

“We love Becca Greenwell,” Odom said. “We attended her Senior Night at Duke,” which Greenwell shared during the Q&A session with the younger group as one of her favorite memories.

The Odoms were not the only ones drawn by Greenwell’s presence to the Owensboro Catholic gymnasium on Saturday.

Retired bookkeeper Millie Mullican met Greenwell at the Healthpark while Greenwell was a high school player. Mullican said they became fast friends and have maintained that relationship for over six years.

Mullican sent cards to Greenwell during each of her surgeries and even sent care packages of homemade fudge and candy to Greenwell and her teammates.

When Mullican found out that Greenwell was hosting the clinic, she offered to work the registration and T-shirt table. Like the over 70 players that attended Saturday’s clinic, Mullican just wanted to be in the room to watch Greenwell do what she does best.

Riney said of Greenwell, “She dreamed of being a D1 player and has made her dreams come true.”