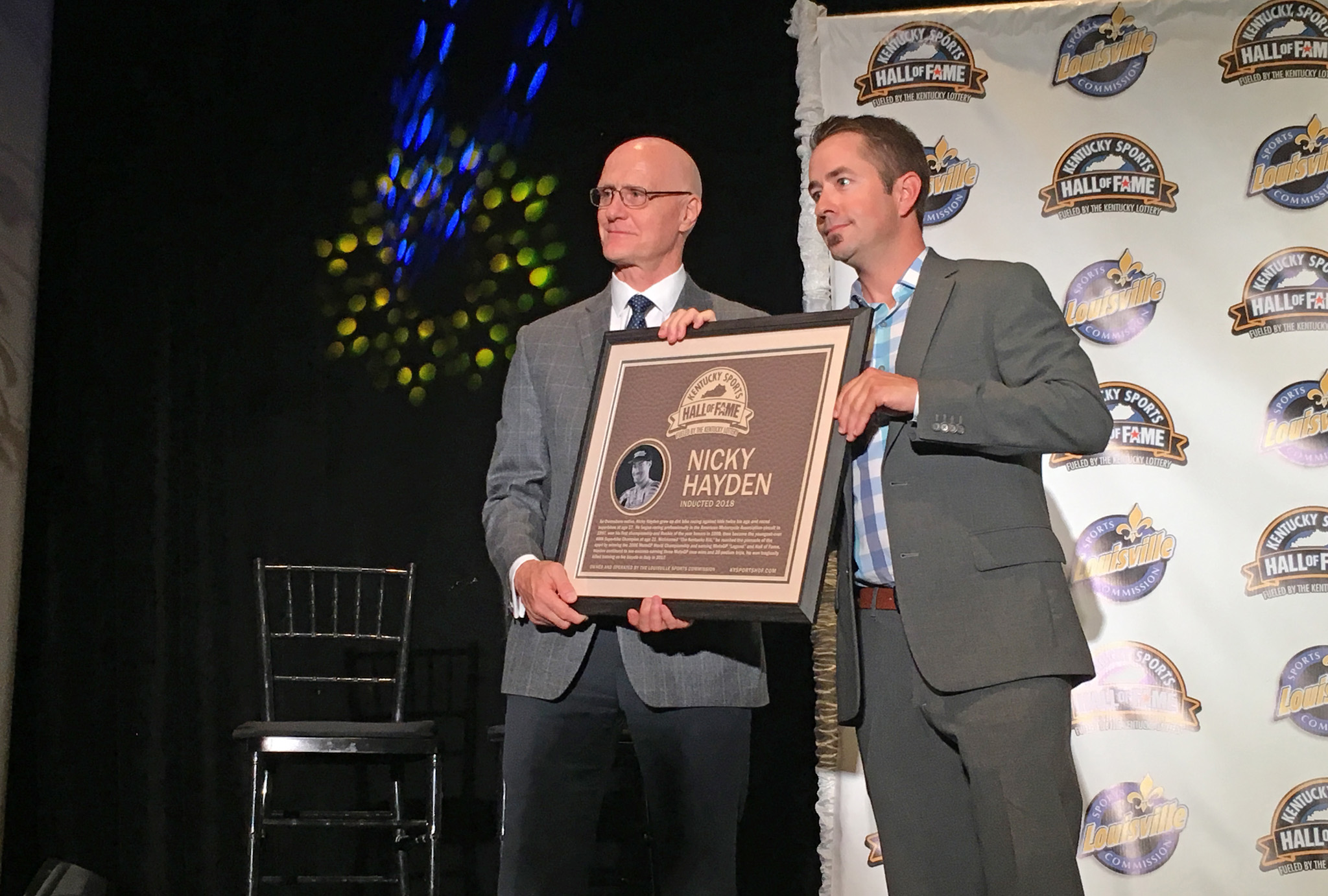 Tommy Hayden (right) accepted a plaque on behalf of his late brother Nicky Hayden, who was inducted into the Kentucky Sports Hall of Fame on Wednesday. | Photo by Danny May

It was a night of champions at the Kentucky Sports Hall of Fame 2018 induction ceremony held Wednesday at the Muhammad Ali Center in Louisville, KY.

Louisville Mayor Greg Fischer opened the night with a reference to Muhammad Ali, who claimed to be the best only because he put in “road time” and trained harder than his opponents.

Like the other inductees, Hayden certainly exemplified training hard.

Older brother and 2004 AMA Supersport champion Tommy Hayden accepted the plaque and offered remarks on Nicky’s behalf. He recalled Nicky claiming the goal of winning the world championship as a young boy and dedicating his life to achieving it. He told stories of Nicky riding motorcycles every day late into the night, and described Nicky as never having a “plan B,” never believing in shortcuts and always giving everything he had.

“Seeing him achieve his dream of winning the MotoGP world championship in 2006 was one of the highlights of my life,” Tommy said from the podium during the ceremony. “No one deserved that more than him. But what really impressed me is that after nearly 20 years of professional racing, he still had the same enthusiasm for the sport that he had when he was a young kid.”

Tommy said being a Kentucky Sports Hall of Fame inductee would have been special to Nicky because he was always proud of being from Kentucky and took great pride in representing Kentucky around the world in the best way possible.

“Although we’re very sad that Nicky is not here to receive this in person, it is very comforting to know that Nicky is being remembered for who he was and still being recognized for the accomplishments he worked so hard for,” Tommy said.

There were plenty of Nicky’s fans in the room who gave the champ a standing ovation following the heartfelt introduction video produced by VisitOwensboro, narrated by Owensboro Mayor Tom Watson and Army Amstrong.

David Newman of Louisville joined 20 other members of the Kentucky Motorcycle Association who filled three tables at the banquet to witness the occasion.

“We tried for years to get Nicky inducted,” Newman said. “We’re honored to be here and very pleased to see this happen.”

In November of 2015, after 13 seasons of competing at the highest level of motorcycle racing in the world, 2006 MotoGP World Champion Nicky Hayden was recognized as a MotoGP “Legend,” MotoGP’s version of the Hall of Fame. That crowning achievement capped an illustrious MotoGP career that included 28 podiums (three wins), seven fastest laps and five pole positions, in addition to the 2006 World Championship title.

But, he wasn’t done yet. After transitioning to the World Superbike division in 2016, Nicky rode on to win a race (May 15 in Sepang, Malaysia) in his rookie season for Ten Kate Honda, finishing the 2016 season fifth in points and securing his spot as only the sixth motorcycle racer in history to win races in American Motorcycle Association (AMA), MotoGP and World Superbike. At the time of his fatal cycling accident in May of 2017, while training in Italy, Nicky was 13th in World Superbike point standings.

His accomplishments off the track make Nicky a true Kentucky Athletic Hall of Famer.

Known throughout the racing world as “The Kentucky Kid,” Nicky’s Kentucky heritage was always near and dear to his heart and he took special pride in his hometown of Owensboro.

“I can’t imagine living anywhere else,” Nicky said in an April 2014 Owensboro Living cover story. “I have a house in California so I can train in the winter and a motorhome in Europe for when I’m racing. But Owensboro is my home. I come from a big family. It’s always nice after three and a half months on the road to have a home and family to come back to.”

MTV2 camera crews followed Nicky during his 2016 season and many Owensboro landmarks can be seen in the background of the film The Kentucky Kid. Nicky’s love for Owensboro is also reflected in the title of the book, “The Haydens: Nicky, Tommy, and Roger, from OWB to MotoGP” by Chris Jonnum, who spent time in Owensboro with the Haydens while writing.

“Obviously it was enlightening for me to spend a few days with them to see where the brothers grew up,” Jonnum said. “But the bigger impression it made to me was that no matter where Nicky has traveled, he always had one foot back in Owensboro. Nicky is at home wherever he goes, but it’s always temporary. And he is always ready to get back home to Owensboro.”

The City of Owensboro presented a Walk of Fame plaque to the Hayden brothers in 2013 and more recently dedicated a bronze statue in front of the Owensboro Convention Center to memorialize the champion.

“Nicky was the Kentucky Kid, but he was so much more to the people of Owensboro,” said Jared Bratcher, Sports Marketing Director for Owensboro-Daviess County Convention and Visitors Bureau. “He was everything right about the American Dream. He wanted to be a World Champion motorcycle racer at age 4 and realized that dream at 24. Nicky was humble and liked it that way.

“Nicky made others’ dreams come true. He donated his time and money to countless charities including the Make-A-Wish Foundation. He donated hundreds of bicycles to less fortunate kids. And just as Nicky wanted it, most of those things were done without the camera rolling.”