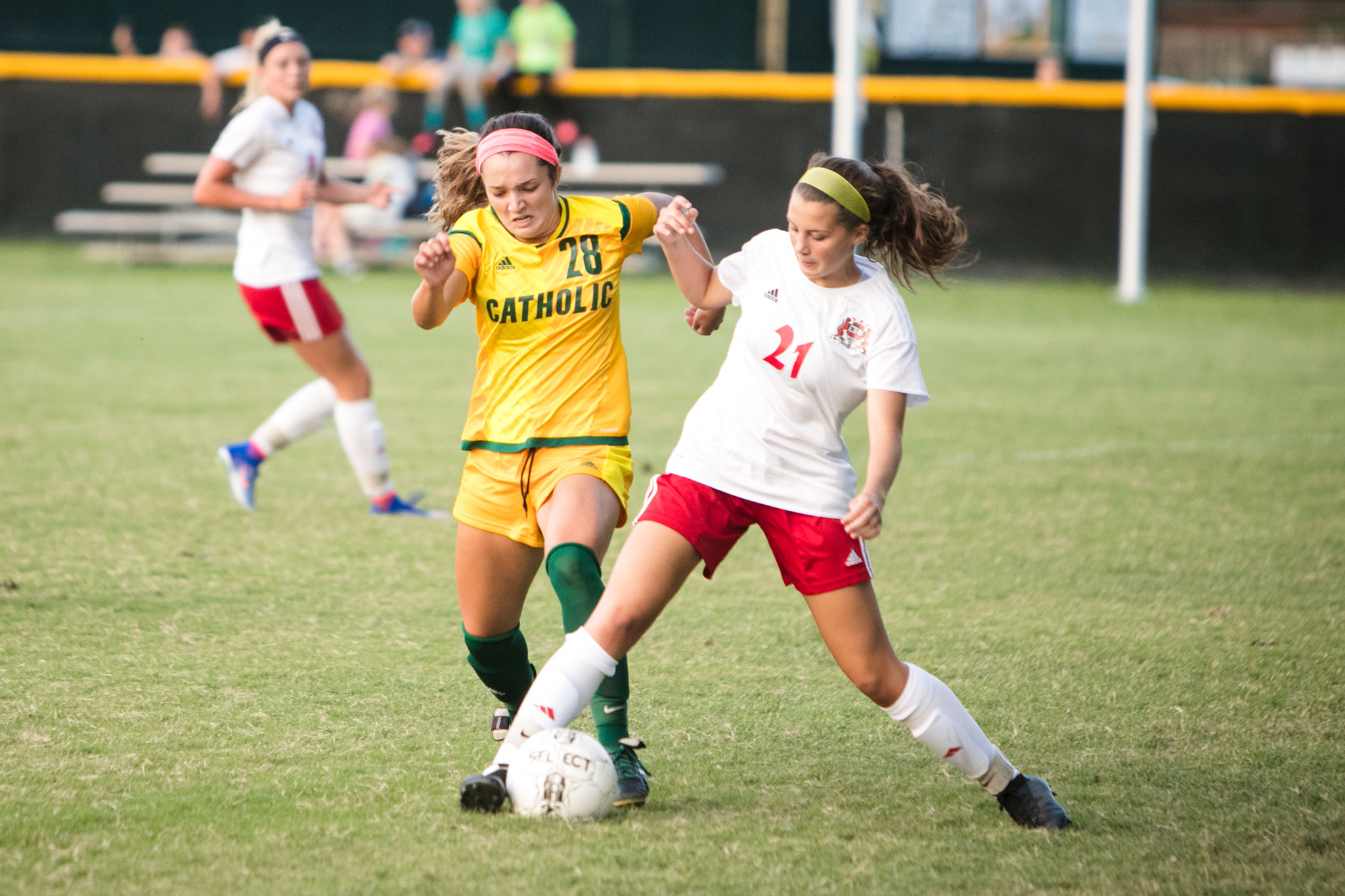 Izzy Stanfield twice came through when the Lady Aces needed her most, and her goal in a penalty shootout lifted the team to victory.

Owensboro Catholic (3-1) led an aggressive attack, but it went to the fourth round of a shootout before they were able to earn the 2-1 win at home Tuesday over Daviess County (2-1).

“I thought both teams fought the whole game,” said Kelli Brannock, head coach of the Lady Aces. “It’s awesome to see that level of soccer so early in the season. We started a little slow, so we’ve got to work on that.”

It was the Lady Panthers who struck first, when a deep pass from Kenlee Newcom set up a goal for Ashlyn Payton from the left side of the box.

Stanfield evened the score with a penalty kick eight minutes later and from there, OCHS largely controlled possession.

“I’m proud of how they came back and picked it up,” Brannock said of her team. “We did what we needed to in order to finish. I’m very excited and happy because the girls have been working hard. Finishing out every half and playing the full 40 minutes each time is really crucial. You can’t let up.”

“Giving up that penalty kind of flattened us out,” Sandifer said. “It was a momentum shifter. They stepped it up and we didn’t, and they earned the win. We didn’t play like we were supposed to play, and Catholic played very well. They were the aggressor for the last 75 percent of the game.”

Despite the Lady Aces controlling the game, they weren’t able to convert on any more scoring opportunities in regulation. It wasn’t for lack of good attempts, though. They had a handful of shots on goal, but goalkeeper Gracie Kemplin made several diving attempts that were able to deflect the ball just enough to keep the score even.

“Tonight, she was far and away our best player, and she kept us in the game when we weren’t playing particularly well,” Sandifer said of Kemplin. “The rest of the team just needs to bring it up to that level.”

Following a scoreless overtime, the game came down to a penalty kick shootout. After three rounds, the teams were squared off at two goals and one miss each. Owensboro Catholic then gained the edge with a conversion by Lily Moore, while the Panthers missed their shot.

Stanfield came through for the second time in the fifth round with a shot into the top of the net, and that was all it took to seal the win.

Brannock said going into the shootout, she told her team, namely goalkeeper Megan Goodwin, to stay calm. Though it’s a district game, Brannock said, it’s not an elimination game.

“An opportunity like this early in the season where it doesn’t mean you go home, there’s nothing to do but have fun and enjoy it,” Brannock said.

The Lady Aces return to action at 11:30 a.m. Saturday at home against Meade County.

The Lady Panthers hit the road for a weekend tournament in Gatlinburg, Tenn., where they’ll play Friday against St. George’s and Alcoa, as well as Saturday against Ensworth.