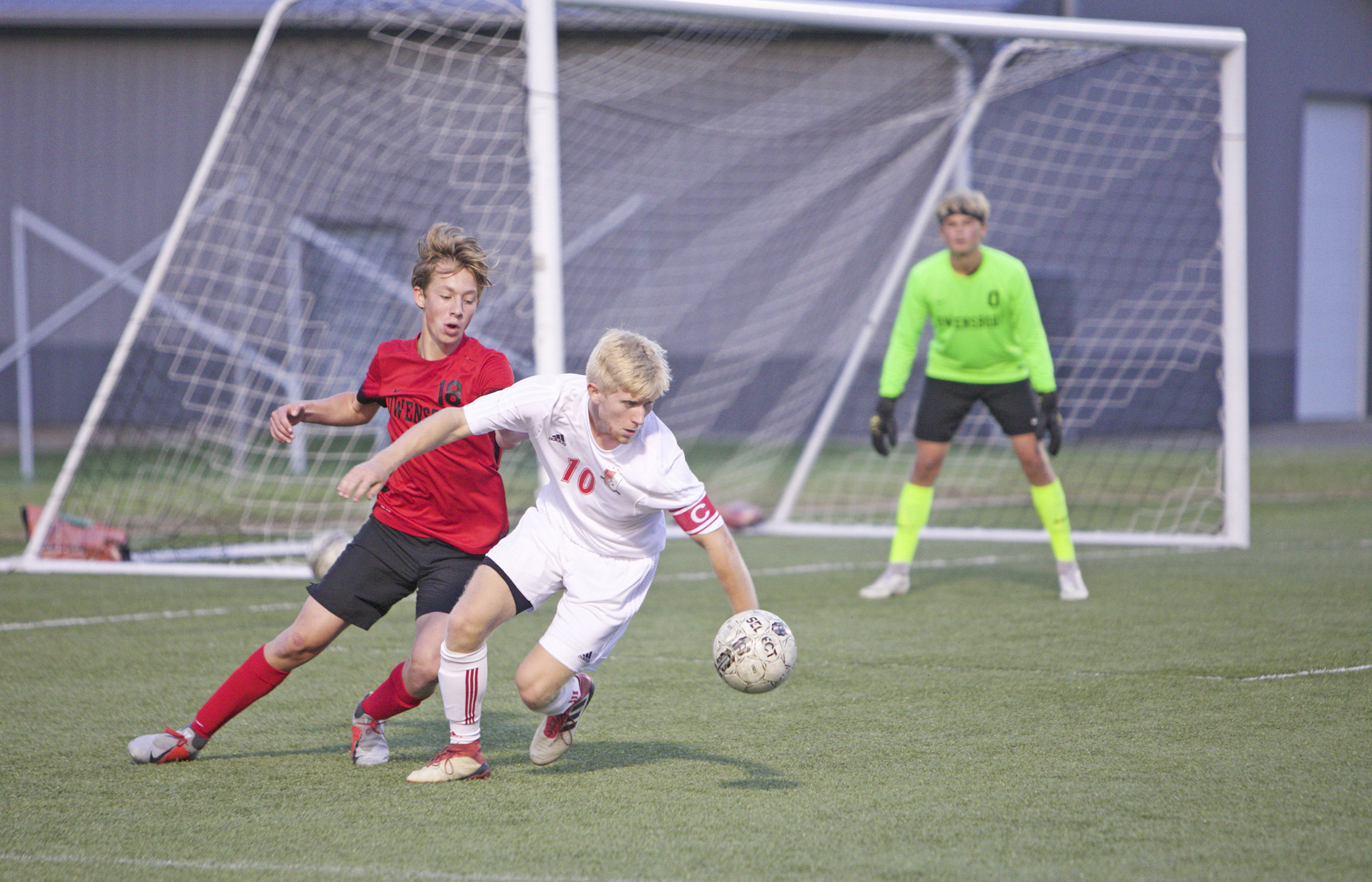 Brian Winkler (10) had two goals in the Panthers' win Thursday over the Red Devils. | Photos by Ryan Richardson

As the night wore on, Daviess County and Owensboro matched each other blow-for-blow in an intense District 9 soccer battle, and neither team was pulling punches.

In the end, though, a late goal from Maxten Miller proved to be the difference in a 4-3 win for the Panthers Thursday night at Shifley Park.

The victory kept DCHS (4-0, 2-0) undefeated and dropped OHS (2-1-1, 0-2) to 0-2 in district play, but Panthers head coach Doug Sandifer knows how close his team was to being on the other side of the outcome.

“It’s an exciting high school game and how a district game should be.” Sandifer said. “This could have gone either way.”

Ryan Haley, head coach for the Red Devils, said his team is much improved from the beginning of the season. They’ve lost each district game by a single goal, so he thinks a few more minor adjustments will get the team where it needs to be.

“We hung in there, and maybe next time we’ll be on the other end,” Haley said. “I think we’re just inches away.”

It was the Red Devils who were able to get on the board first with a goal by Paxton Jenkins, and that score held til halftime. For much of the half, Owensboro was the more aggressive team and controlled the ball, but Daviess County was able to keep them out of the box.

Second-half possession leaned more in favor of the Panthers, who were able to mount the comeback and take the final lead just before time expired.

DCHS evened the score 10 minutes into the second half when Hunter Clark crossed to Brian Winkler, who was able to touch it in for his first goal. Winkler scored again 10 minutes later by converting on a penalty kick after a tripping foul against OHS in the box.

A quick push up the field by Owensboro led to a goal by Grayson McFarland, leveling the score at 2-2 with 20 minutes to play.

Another pair of back-to-back offsetting goals came 10 minutes later, this time with the Red Devils gaining the edge for less than a minute. Andrew Saltsman sent in a pass from the right that was place perfectly in the box, where Reis Dickinson scored with a header to the back of the net.

The Panthers pushed upfield and got the ball to Nick Armistead for a goal in traffic, and the 3-3 score held until on three minutes remained in the game. A cross from Clark set up the goal by Miller, and DCHS maintained control from there.

Haley said he was proud of the Red Devils and thought they had a good chance to win.

“They were able to hold us off whenever we really need goals the most,” Haley said. “I’m really proud of our boys. They rose to the adversity. We came into the game as an underdog. I thought we were going to win that game.”

Sandifer said he expects many of the games this season to be tough. Between losing experienced players to graduation over the last two years and having a target on their back, he said it’s up to the Panthers to determine how their season plays out. The game against OHS was only the first example.

“I think Owensboro is ready to have their turn, and it’s up to our guys to determine if we’re ready to give up our turn,” Sandifer said. “It’s on the guys to meet the motivation they’re going to face from some of theses teams we’ve been able to beat over the years.”