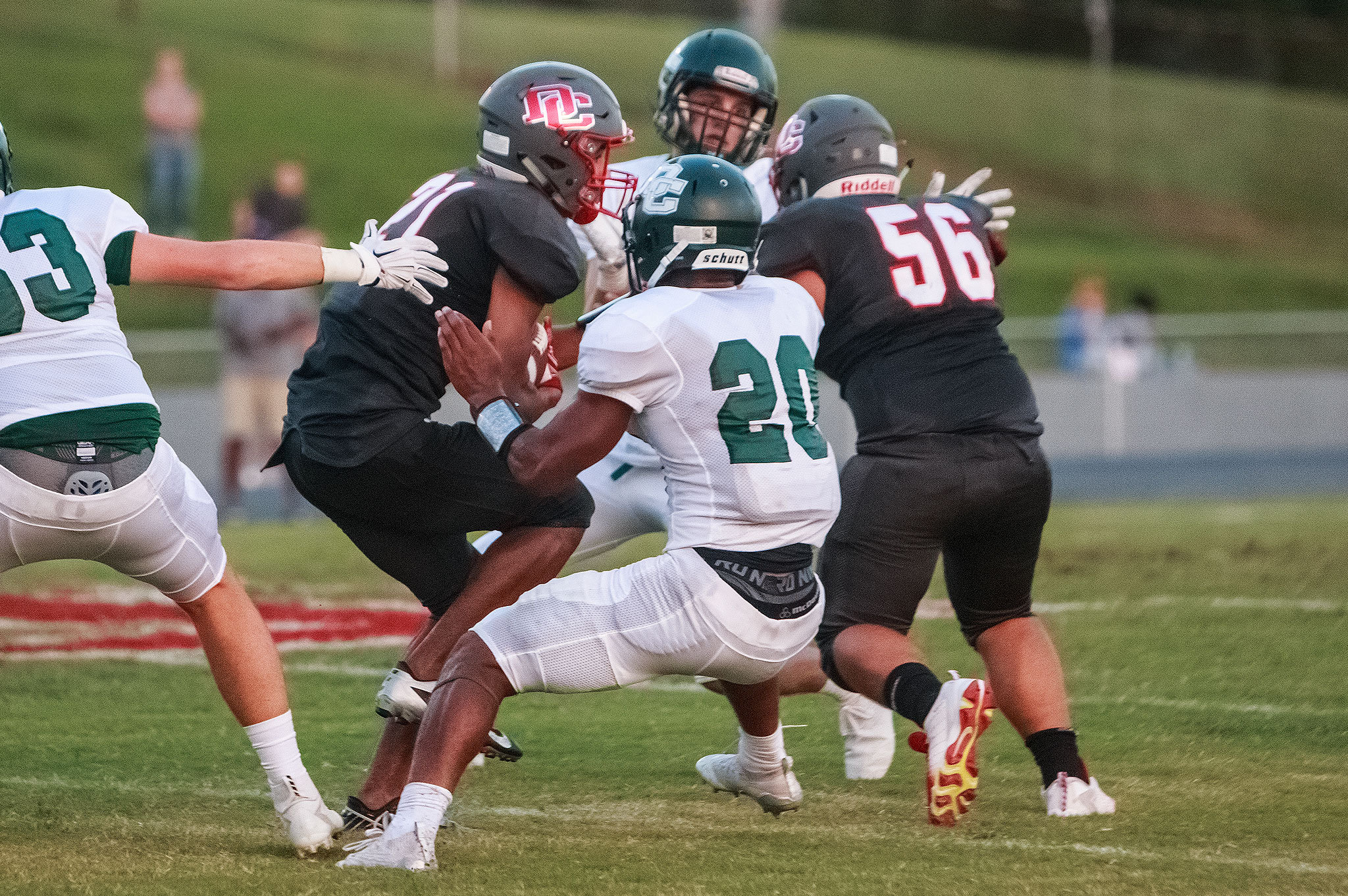 Daviess County overcame a big early deficit to walk away with a season-opening 49-26 win Friday night over Owensboro Catholic.

The Aces (0-1) took control early, gaining a 20-0 advantage after a touchdown on the first play of the second quarter. The Panthers (1-0), though, made some defensive adjustments, allowing the whole team to settle in and find a groove.

DHCS head coach Matt Brannon said he thought there were high expectations for the team going in, and it took a quarter to finally shake off the early nerves. He said it was the first time the Panthers haven’t come into the season as underdogs, and there was some unfamiliar pressure.

“It was exciting for us to get down and not fall apart, to continue to believe in what we were doing,” he said. “We made some changes and backed our defense off a little bit. We knew our offense would get in a rhythm, and once they did, it was like ‘watch out.’ ”

While it was a team effort, the Panthers came roaring back thanks in large part to a strong game from a trio of seniors — quarterback Joey Cambron and wide receivers Landon Newman and Marquel Tinsley.

Only a minute after finding themselves down by three scores, the Panthers finally got on the board when Cambron found JQ Fletcher on the left side. Fletcher, a senior receiver, cut back in and broke two tackles on his way to the end zone. Cambron then connected with Newman twice through the air to put DCHS on top 21-20 at the half.

“We just needed a couple of positive plays to get us going,” Brannon said. “We needed a little boost.”

The Aces, meanwhile, came out firing on all cylinders. Except for a botched handoff to start the game, OCHS was proficient on the offensive end. Head coach Jason Morris said he was proud of his coaching staff for how good the team looked out of the gate.

“We were really good coming out,” Morris said. “You could tell we were prepared.”

The first points came early when senior receiver Ya Ya Gray caught a short pass and beat every defender up the sideline en route to a 78-yard touchdown. Gray then came up with an interception at the other end of the field to thwart a drive by Daviess County.

The Aces then marched down the field to set up a 7-yard touchdown sprint by sophomore running back David Hogg. A three-and-out by the Panthers gave the ball back to OCHS, and on the opening play of the second quarter, junior quarterback Drew Hartz found senior receiver Nick Mills wide open on the right side for an easy touchdown.

The final score for the Aces came on the first drive of the second half, but it was still close until about 6 minutes were left on the scoreboard. A 17-yard Cambron-to-Tinsley connection put the Panthers back on top for good, but they went on to add three more scores.

Newman followed up a 3-yard touchdown dive with 46-yard scamper to round out his scoring for the night. Cambron hooked up with Tinsley one more time on a perfectly placed long ball for a 72-yard touchdown. Brannon said he never doubted the Panthers would get rolling on offense.

“That’s where we’ve grown as a staff and grown as a team,” he said. “We have a bunch of seniors that believe in each other and never really doubted that we were going to get going. We know we can put points on the board. We were right on the verge of making some big plays and just missing them, so we were hoping we were going to get that momentum.”

Morris said the Aces, on the other hand, missed one big opportunity late. With about 8 minutes to play and down 29-26, a receiver dropped a potential touchdown catch on third down, then dropped another ball on fourth to turn possession back over to the Panthers. While he would have like a different outcome, he said it’s a chance for the team to improve, and he’s proud of the effort.

“It is what it is,” he said. “It’s life. You make mistakes, but what we’ve got to do is learn from it. What happened was we let one bad play need to the next.”

Brannon said despite the boost in confidence from this win, the Panthers also have some things they need to work on, primarily overcoming a slow start.

“There’s a lot of things we’re going to be able to correct on film,” he said. “It kind of keeps things in perspective. They can’t just show up and play. They’re going to have to buckle down, prepare themselves, watch the tape, fix their mistakes and be ready to start fast. I think carrying this momentum into next week will be big for us.”