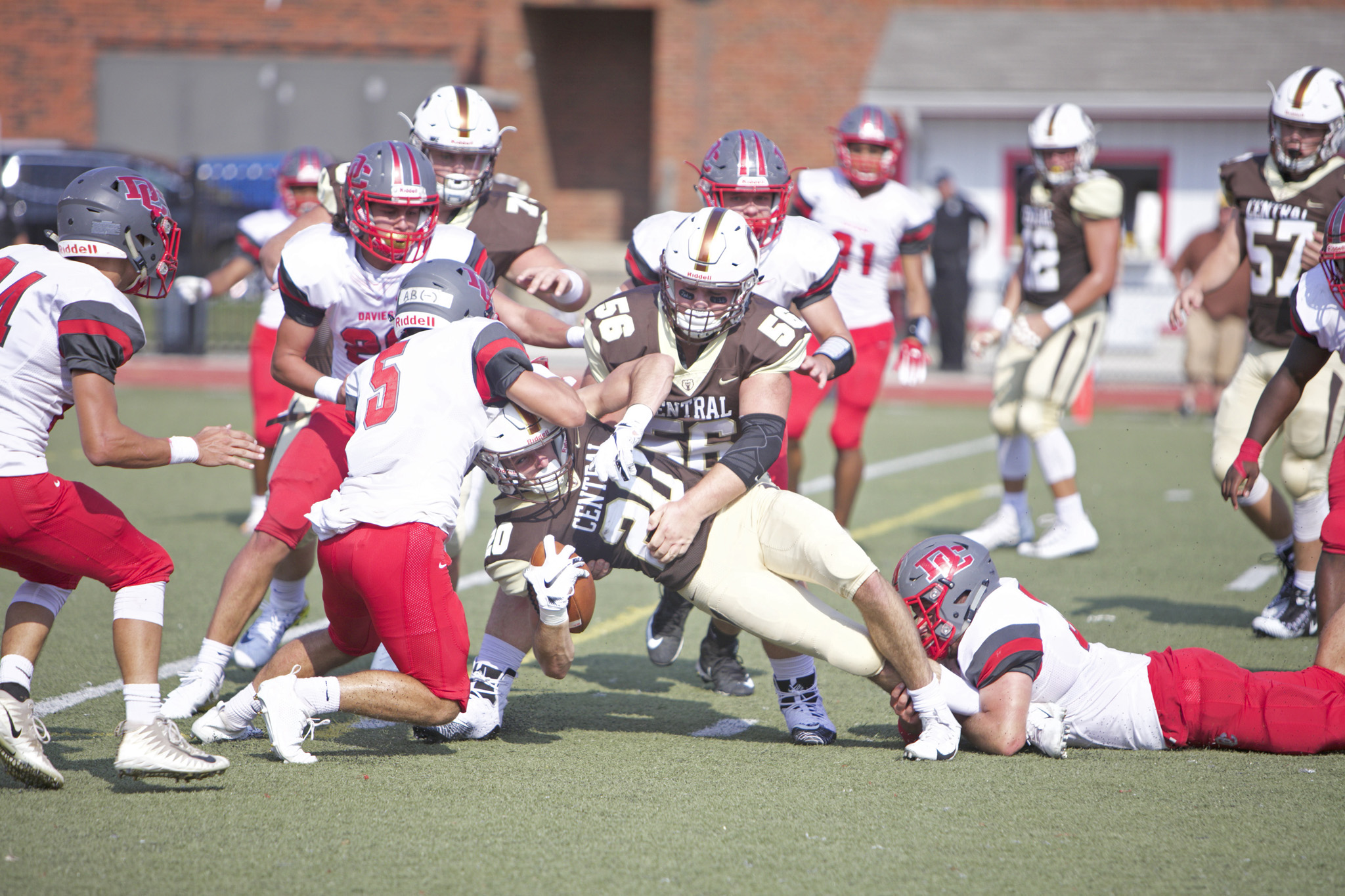 Daviess County struggled to stop the run game in a 49-13 loss to Evansville Central Saturday. | Photo by Ryan Richardson

Star wide receiver Marquel Tinsley got hurt on the opening kickoff, and Daviess County was never able to find a rhythm in their 49-13 loss to Evansville Central Saturday afternoon at Enlow Field.

The Panthers (1-1) struggled to stop the Bears for most of the night, and the normally high-powered DCHS offense was held to a total of 159 yards in the Evansville Teachers Federal Credit Union Border Bowl Football Challenge.

Panthers head coach Matt Brannon said the absence of Tinsley — who is expected to miss a couple of weeks with a shoulder injury — probably got in the heads of his players.

“He’s our leader,” Brannon said. “He gives us the momentum we need, and he’s the one we rely on to spark us. We challenge the other kids to step up, but we couldn’t get anybody to make a play for us.”

A slow start got DCHS in a big hole early. On the second play from scrimmage, quarterback Joey Cambron threw his first of three interceptions, and the following two drives for the Panthers were quick 3-and-outs. The Bears capitalized all three times with a heavy ground attack to take a 21-0 lead on the first play of the second quarter.

The Panthers finally got on the board when Cambron completed a 32-yard touchdown pass to a wide open Blake Baker on the left sideline. Weston Lane then intercepted the Central quarterback and returned it 36 yards to set up a good opportunity for DCHS.

“I think mentally he was checked out,” Brannon said. “He didn’t have his favorite target there, regardless of the fact we’ve got other weapons on the field. But we couldn’t establish our run game. That hurt us. Usually when we have success, we can get Landon (Newman) going. They were just a big, physical team that took that away from us.”

After the pick, the teams traded punts before Central scored on a 3-play, 65-yard drive just before halftime. The Bears quarterback was knocked out of the game early, but Brannon said it didn’t affect Central’s level or style of play very much.

“Even with their backup quarterback in, a team like that doesn’t miss a beat,” he said. “We knew they would be run-heavy and physical, and they just wore us down. We played a lot of defense early. We couldn’t establish drives to stay on the field and give our defense time to recover.”

Both teams scored on their opening possessions of the second half. For DCHS, Cambron scored on a 4th-and-goal from the 1-yard line and was barely able to cross the plane for the score. Central added a pair of touchdowns in the 4th quarter.

Brannon said it was probably one of the toughest games the Panthers will have this season.

“Hands down, that’s one of the best offensive and defensive lines we’ll play all year,” he said. “That’s where the games are won and lost — in the trenches — and we didn’t win there.”

Moving forward, he said the Panthers will have to learn from their mistakes and find a way to win without the leadership from Tinsley, but he’s happy the team didn’t give up.

“We’ve got to find someone else that’s going to be willing to step up when he’s not out there,” Brannon said. “There’s definitely going to be things we can correct scheme wise. I can’t fault our guys efforts. I think they played hard all night, we just couldn’t get it done.”

Cambron went 10-29 with 78 yards and three interceptions, with one rushing touchdown. Newman had 12 carries for 57 yards, while Baker led the team with four catches for 65 yards and a score.