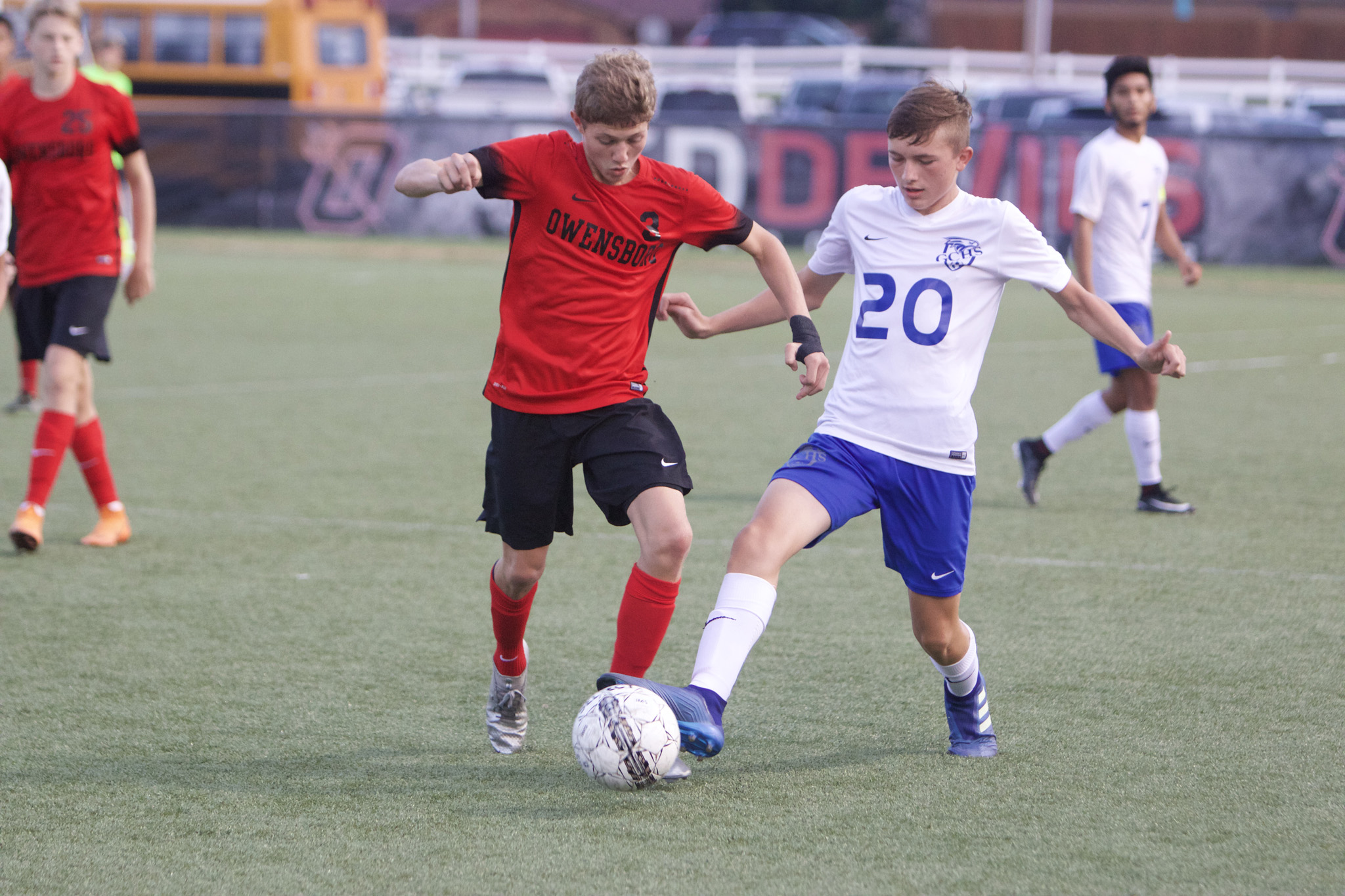 Owensboro picked up its first win of the season with a 3-0 victory over Graves County Saturday. | Photo by Ryan Richardson

Owensboro’s boys soccer team scored its first goals of the season Saturday en route to a 3-0 win over Graves County, and Apollo used a hat trick from Sui Thang for a 6-3 victory over Meade County.

After failing to get a single goal the first two games, the Red Devils (1-1-0) came out with a single, determined purpose — shoot the ball.

Head coach Ryan Haley said he told the players he wanted them to have 30 shots on the night, a goal he set excessively on purpose. He said they finished with 31 shots, though only 13 of them were officially on goal. It wasn’t so much about being on goal as it was about having the players be more aggressive on the offensive end.

“We had a big emphasis on not being picky on our shot selection instead of caring about it as much as we did in the past,” Haley said. “I thought they did a great job as far as turning and shooting.”

Senior Austin Sovar was the first Red Devil to find the net this season when he broke free and beat the defense for a goal. It was the only score of the half, but Owensboro constantly applied pressure and threatened to increase the lead.

Junior Andrew Saltsman was finally able to tack one on when he knocked a powerful kick across the box to score in the top left corner of the goal. Neither team could do much against the other until senior Will Clark got the final goal with a penalty kick with 3 minutes to play.

Haley said while the offense was the focus going in, he was also pleased with his defense, namely a back line that kept the Eagles from finding too many chances. Junior goalkeeper Bryson Wilkerson only had one save in goal.

“We’re pleased,” Haley said. “We’re happy tonight and we’ve got to build off this. I’m very proud of them. But now it’s got to be in our rearview and we have to stay focused.”

Sovar and Saltsman, along with juniors Grayson McFarland and Reid Dickerson, led the team with two shots on goal each.

The Red Devils now will focus on a Thursday game at 7 p.m. against Daviess County (2-0).

The Eagles (2-1) played a game that was littered with penalties, and most of the scores came off free kicks, including all three goals for Meade County.

Apollo head coach Ryan Poirier said aside from the penalties, he was happy with the way his team played.

“Other than that, we dominated possession,” he said. “We played everybody tonight, and the level didn’t drop. Everybody came in, everybody contributed, and everybody played well.”

Senior Wes Knott got things going when he punched a shot in off the rebound from a penalty kick, and Thang, a senior,  got his night started on a quick push up the field to add to the lead. An answer from Meade County cut the defecit to 2-1, a score that lasted until halftime.

A penalty kick early in the second half allowed the Green Wave to equalize the score, but Thang struck again to put the Eagles back on top. Back-to-back goals from junior Jaelin Kirk and Thang bumped the Apollo lead to 5-2 with about 15 minutes to play.

Each team scored once more off a penalty kick, with the final score coming from junior Yo Shi Ya for the Eagles. Poirier was pleased with the amount of offense Apollo had, but said he thinks they could have had even more.

“If we would have been a little more clinical, we probably could have scored more goals,” he said. “But it’s nice that we were giving ourselves so many opportunities to score — and not just score, but have really good chance to score.”