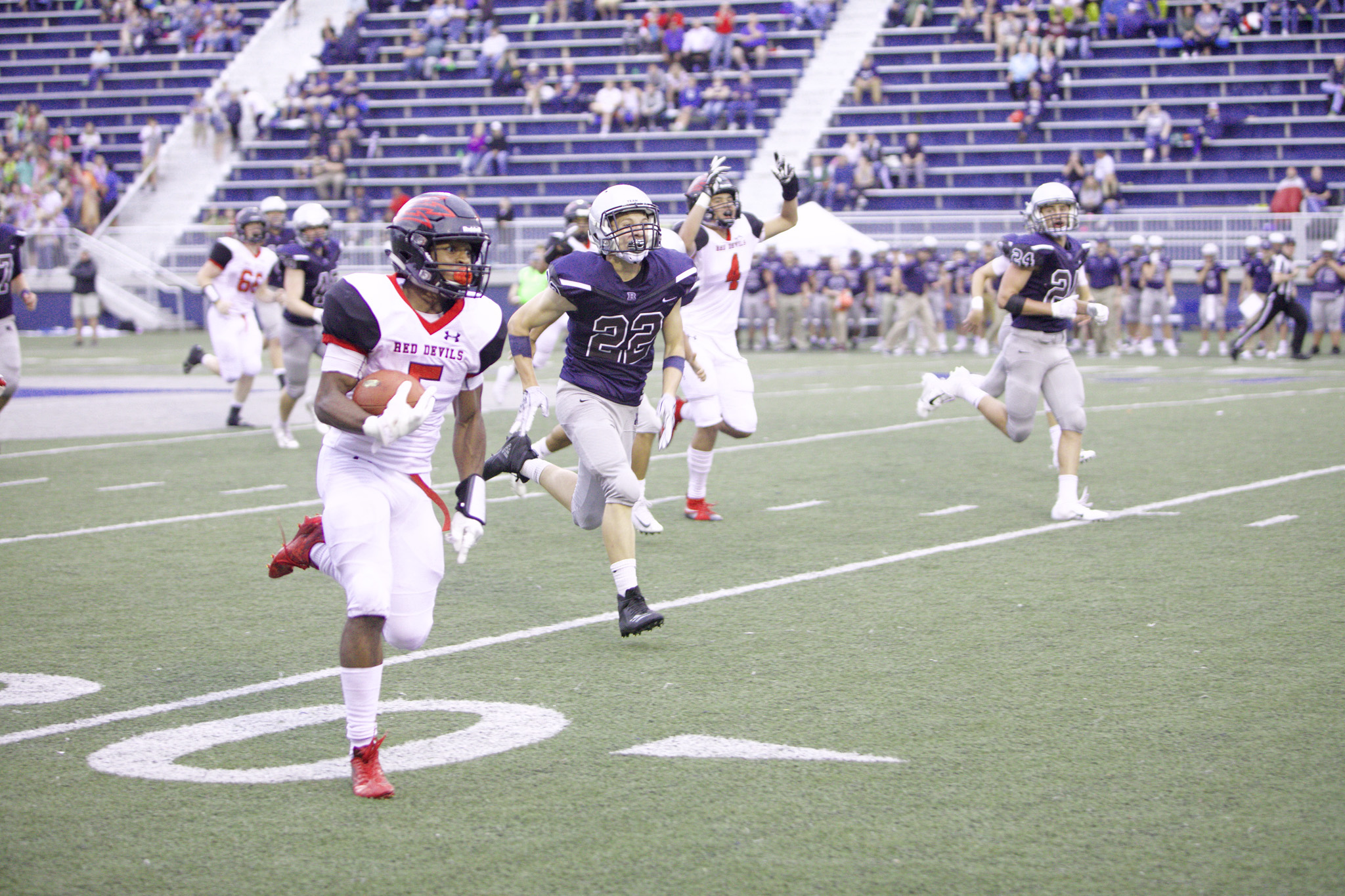 Monte Owsley (5) led the Red Devils to a 35-34 win over Evansville Reitz. | Photo by Ryan Richardson

After a first half that was all about the offense, it was the defense that came through late in the game to lift Owensboro to a 35-34 victory over Evansville Reitz.

The Red Devils (2-0) completely shut out the Panthers in the second half of the Evansville Teachers Federal Credit Union Border Bowl Football Challenge, and they got help on all sides of the ball at just the right times.

“We came out and scored a bunch early but couldn’t get a stop,” said Owensboro head coach Jay Fallin. “Then all of a sudden in the second half, we’re throwing interceptions and we can’t move the ball, but the defense stepped up. The special teams had some big plays, too. Everybody did their job tonight.”

The night started with Reitz returning the opening kick to the OHS 3-yard line and punching it in for a quick score, but they missed the extra point. Devils’ quarterback Will Warren marched the team down the field, and 4-yard touchdown run from Tre Green capped off a 10-play drive to put OHS up 7-6.

The Panthers again scored and missed the extra point to go up 12-7, and Green got the Devils in good position to strike back by returning the ensuing kickoff to the Reitz 35-yard line. Monte Owsley, who finished the night with 265 all-purpose yards and three scores, got his first touchdown of the night when he caught a short pass and beat every defender to the end zone.

“He’s incredible,” Fallin said. “He can score any time he touches the ball. We couldn’t be more proud of him, and he’s got 10 great guys blocking for him out here. We’ve got a lot of great players, but he shined tonight.”

Owsley was also quick to give praise to his team.

“I couldn’t do it without the teammates I have,” he said. “I have to trust them for me to make big plays.”

Early in the second quarter, OHS nearly got a stop on a 4th-and-12, but a late flag was thrown and the Devils were called for pass interference. Reitz scored three plays later and the 2-point conversion was good.

Owsley came through for the Devils again on another quick drive. Warren found Owsley on the left sideline, but he cut across the field and broke a pair of tackles before falling into the front right corner of the end zone with about 5 minutes to play until halftime.

Reitz then scored twice in the final minute of the half. The first came off a drive in which they converted three 3rd-and-long situations, and the second was a defensive touchdown. In the only stop of the first half, OHS botched the snap for a punt deep in their own territory, and Reitz was able to fall on top of a bouncing ball in the end zone.

Despite the finish heading into the locker room, Fallin never lost confidence that his team would prevail.

“We’re a two platoon team, so we don’t play a lot of guys both ways,” he said. “We know sometimes a team may be up on us at halftime, but we believe if we stick with it and continue to battle, they’re going to wear down and we’re going to have an opportunity to capitalize in the second half. These kids did that.”

Rather than touchdowns, the teams traded punts to open the third quarter. On the first play of their second drive, though, Owsley turned the corner and blew by everyone for a 52-yard score.

The Devils then forced a three-and-out, setting up what turned into the final scoring drive of the game. A short punt gave OHS control at the Reitz 48, and Owsley quickly moved the chains to the 30. Warren connected with Treyvon Tinsley on the next play, and the extra point gave them the 35-34 edge.

Fallin said it was important the the team kept fighting when they were behind.

“That’s the name of the game,” he said. “It’s never over. We believe we can score like that any time. I think we proved that tonight. Just don’t ever quit, keep battling.”

The Red Devils nearly added to their lead after getting into the red zone three separate times, but a pair of interceptions and a fumble on a pitch to the running back gave the ball back to the Panthers.

The final threat from Reitz came after the fumble by OHS. The Panthers were driving downfield with the clock winding down, but Ethan Avery recovered a Reitz fumble on the 25 with 2:04 to go.

All Owensboro had to do from there was pick up a pair of first downs, and it was none other than Owsley who broke off a long run to seal the deal.

Owsley still said it was an all-around effort, and the Devils had to be able to rely on each other to come out on top.

“After halftime, we told each other we had to trust each other and execute both ways,” he said. “We came out and played our hardest and got the win.”

Owsley finished with 11 carries for 140 yards and a touchdown, adding six catches for 125 yards and two scores. Warren went 20-for-31 with 280 yards, three touchdowns and a pair of interceptions. Green carried the ball 11 times for 66 yards and one touchdown.