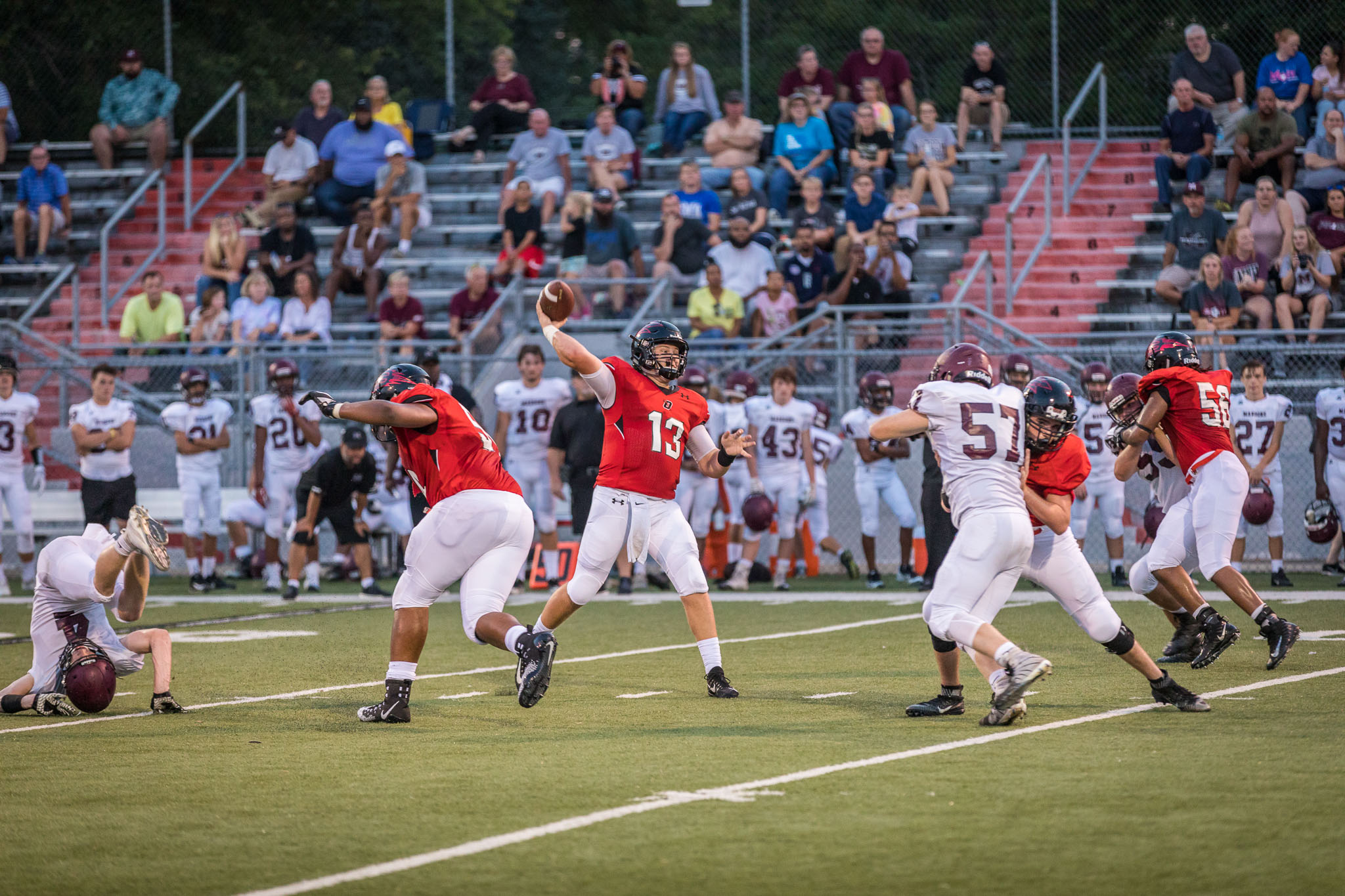 Will Warren led Owensboro to a 41-13 win over Madisonville-North Hopkins Friday night. | Photo by AP Imagery

New starting quarterback Will Warren led Owensboro to a 41-13 victory over Madisonville-North Hopkins in the first game of the season Friday night at Rash Stadium.

Warren, a senior who transferred from Owensboro Catholic last year, threw five touchdown passes for Owensboro (1-0), while his lone interception came on the first play from scrimmage of the second half. That pick set up a touchdown drive for the Maroons, and the Red Devils’ lead was cut to just eight points at 21-13. Warren said the team responded well from that point on.

Head coach Jay Fallin, now in his fourth season at OHS, agreed with Warren and said he was proud of the team’s response to the pressure-packed opening minutes of the third quarter.

“I’m proud of the way we weathered the storm early when the score became 21-13,” he said. “That’s a sign of maturity. It’s a testament to how hard we’ve worked in the offseason to get tougher.”

Fallin said he was thrilled with the performance of his new quarterback.

“He hasn’t played live football since almost a year ago,” he said. “I thought he handled it tremendously.”

Another top performer for the Red Devils was junior wide receiver Imonte Owsley, who ended with 115 yards receiving and 71 yards rushing. Fallin said Owsley is a great weapon for Owensboro.

“He’s just an unbelievable ball carrier, and what really makes him special is the rare ability to run the ball out of the backfield and go out and catch the ball the way he does,” Fallin said. “He’s short, but he is very compact and strong. He’s elusive, and he’s so fast.”

Warren and Owsley connected first connected on a 55-yard screen pass up the middle for the first score of the game. Warren also threw touchdowns to sophomore receiver Treyvon Tinsley, junior back Jordan Sorrells and sophomore receiver Ben Flaherty before Owsley ran one in himself for a 52-yard score. The pair hooked up one more time on a 42-yard pass-and-catch with only 1:18 left on the clock, capping a solid debut in red and white for Warren.

“Everybody’s going to get the ball at some point,” Warren said of finding a variety of receivers. “You have to be ready. All spreads are the same, and I felt more comfortable as the game went along.”

The Red Devils hit the road to take on Evansville Reitz at 5 p.m. Friday night.