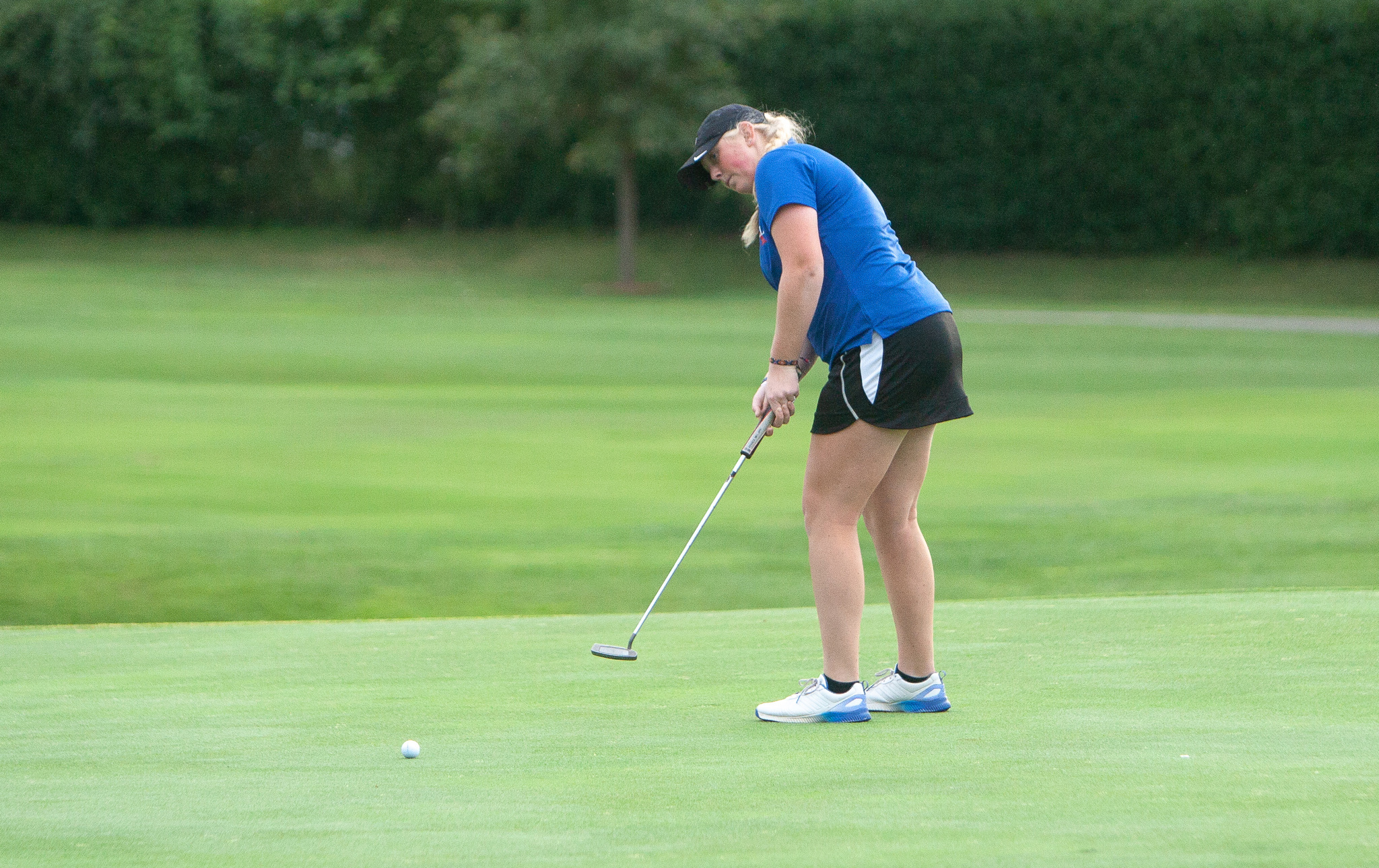 Briley Carter is preparing for the last postseason of her high school career. | Photo by Ryan Richardson

As her final putt rattled in the cup to close out her best round of the season, Briley Carter finally realized her high school career was nearing its end.

It’s been a long road — she actually started playing varsity in 5th grade — but she’s been able to lean on her father, Jarrod, who serves as the Apollo girls’ golf coach. Following Briley’s final round of the regular season Monday, it was just as emotional for Jarrod as he embraced his daughter on senior night.

“I cried like a baby when I presented her with flowers when she walked off the green,” he said. “A lot of emotions came out, reflecting on the amount of time I was able to spend with her playing golf. We have a special bond as dad and daughter.”

Their relationship on the course started around the time Briley was 5 years old, and it was a natural fit in a family full of golfers. She first got involved simply to be out there with her dad as he hit balls, but it didn’t take long to realize she had some talent.

“At first I went out there for fun,” she said. “By 6th or 7th grade, I realized I could compete with high schoolers, which was scary.”

Jarrod said he was just happy to have her out there with him, though he did put her in the First Tee program once he got involved with it. There, Briley learned basic fundamentals that helped her know what to do when they played together.

“I didn’t have to worry so much about kid behavior on the golf course, or where she was at when I was swinging,” Jarrod said. “It made it very enjoyable for us to go play. She wasn’t a child prodigy or anything like that, so I wasn’t planning her golf future at an early age. We just spent a lot of time together playing for fun.”

As Briley progressed in the First Tee program, she began competing in the Go Junior Golf Series put on by Mark Price every summer. She started learning the rules of golf and how to play without much assistance — choosing her own clubs, for example.

“When the opportunity came for high school tryouts, Briley impressed the coach because she knew a lot of rules and could play without being constantly helped,” Jarrod said.

A year later, he took over as the coach at Apollo, and he has carried the double duty of father and coach ever since. It wasn’t a totally new experience, as Briley said her parents coached her in youth sports, but it did take some adjusting at first.

“When I need something, I can always talk to my dad,” Briley said. “He knows how to calm me down. He’s also the coach, so he knows what advice to give me. It’s been a challenge separating him as dad and coach, but it’s something I’ve learned over the years.”

Jarrod agreed that it’s difficult for both of them to differentiate their roles on and off the course. He said they’ve spent more time out there as father and daughter than as coach and player.

“Our relationship on the course has had its ups and downs, but we have worked through it,” Jarrod said. “I have always expected more from her because she is my daughter. It probably wasn’t fair to her, but Briley had a natural talent. The coach wanted to see her flourish, and the dad expected it.”

Briley garnered more and more awards as she rose through the ranks, and she ended her junior season on a high note. She won the city-county tournament, and advanced to the state competition as an individual.

“It was cool to achieve those things before my senior year, because now I know what I can do,” she said.

She nearly repeated as champion at city-county, where she was tied after 18 holes but lost the first playoff hole this time around. Now, as she prepares for her last postseason, she’s hoping to win regionals and place at state.

The talent in my game has always been there. The mental part has taken practice over the years. — Briley Carter

There won’t be much to prepare for physically, Jarrod said, but the two will try to fine-tune the short game one last time. The biggest challenge, though, is staying focused mentally.

“Golf is a game of mistakes,” he said. “Everyone has them during the round. We want to control our emotions after the bad shot or bad hole. Confidence is a huge factor — Briley understands that. If a player knows they can birdie any hole on the course or string together several pars, it makes it easier to control emotions.”

Briley didn’t shy away from admitting that was the biggest part of the game she struggles with, but she’s put in a lot of effort to control her emotions.

“I’ll go out there and freak myself out, and those are when I have my bad days,” she said. “The talent in my game has always been there. The mental part has taken practice over the years.”

Jarrod said it’s been a roller coaster watching Briley’s last season, and the pair had a lot of expectations this year.

“Some of the expectations were met and some were not,” he said. “However, I love watching her play. Not many girls we see in high school can hit the ball like she can. I am going to miss being able to talk to her while she is playing. I think she listens to me more on the course than off of it.”

Briley said her dad makes it easy to enjoy golfing, and it’s something that spreads to the other players as well.

“Ever since my dad started coaching, the girls that come out and play enjoy it,” she said. “My dad has a really big impact in that because he makes it fun. He coaches and teaches, but he also builds relationships with everybody on the team.”

Clearly, though, the bond most special to him is the one with his daughter. Briley said she hopes she can move on to play at the collegiate level, but Jarrod is hoping she still makes time on the course with him for years to come.

“I hope it is something we continue as she gets older,” he said. “I hope she would still want to call me up and say ‘Do you want to go play?’ “

In the short term, Briley and the team have only a few days left before they compete in the regional tournament. She said the other teams will be tough to beat, but said the E-Gals can put up a fight if they can all play well.

“Our girls lately have been having pretty good days,” she said. “It’s a day by day thing. Our district alone is really competitive with each other. Individually, there will be a lot of competition.”