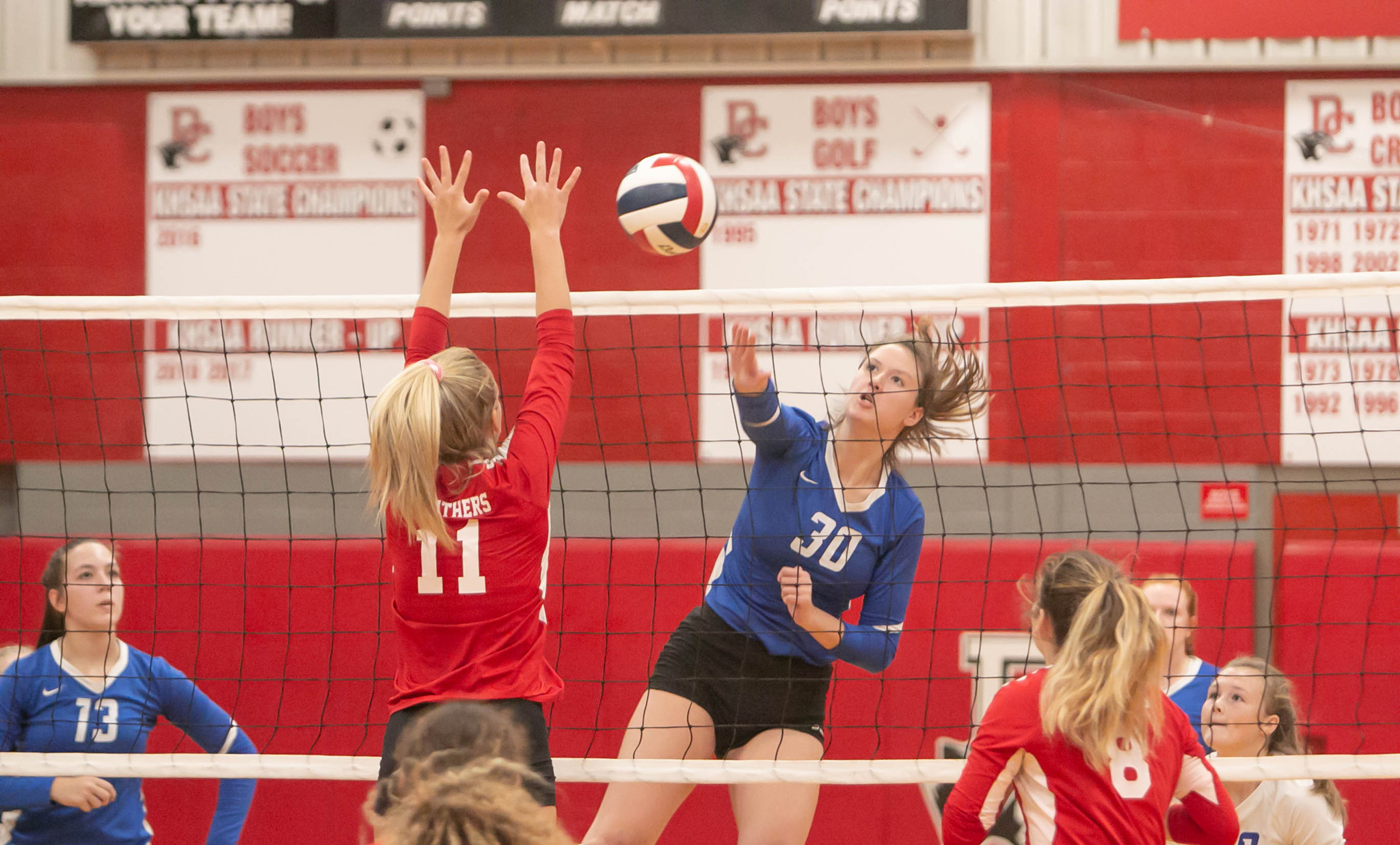 Apollo capped off district play without losing a single set all season for the first time in program history. | Photo by Ryan Richardson

Tuesday’s sweep of Daviess County was a monumental win for the Apollo volleyball team, as it marked the first time they made it through an entire season of district play without dropping a single set.

AHS head coach MaryAnne Howard said the goal from the beginning was to be one of the best teams in the area. Now that they’ve far exceeded those expectations, the E-Gals will start looking toward the playoffs.

“It’s a testament to how hard these girls have worked all season long,” she said. “We’ve had goals from the beginning of being the very best we could be and being one of the best teams in the region. They’ve taken care of business, but now we have to focus and get ready for postseason play.”

The match at Daviess County started heavily in favor of Apollo, as they jumped out to 6-1 lead. A bit of back-and-forth kept the gap steady through a 13-7 advantage before the E-Gals went on a long run. Behind back-to-back aces from Anslee Hopewell and some big kills at the net, AHS stretched the lead to 22-9 and easily closed out the set.

The Lady Panthers tightened up their game, but it still wasn’t enough to overcome a talented Apollo squad. Still, Howard said the players have had to stay focused when it comes to district opponents.

“We’ve been focused all year long about district play and how important it is to bring our game,” she said. “The players know each other very, very well because of the proximity of all the schools. Everybody is going to bring their ‘A’ game every night. Tonight was a tremendous match between both teams.”

Apollo worked their way to a 12-6 lead in the second set, but Ashton Johnson helped put Daviess County on top at 16-15. The teams were at 17-all when the E-Gals went the rest of the set without losing a point. Natalie Ewing led the cause at the net and finished off the set with a light touch on one point and a hard spike on the next.

“Natalie really took over at the net,” Howard said. “I think each time we step on the floor, she gets better and stronger.”

The final set was much like the second, and a pair of short runs late helped AHS create separation and roll to the three-set victory.

Tuesday marked the seventh consecutive victory for Apollo, and they’ve dropped only a single set in that span. Even when the E-Gals have come up short this season, they’ve lost by thin margins.

In their four losses, they’ve dropped 10 sets (13 including sets lost in a victory), and Howard said it’s helped shape this year’s team.

“We’ve played a tough schedule this year,” she said. “The teams we have lost to were close games the whole way through. I think those losses have helped build us to where we’re at now. I think we’re playing at a high level.”

The E-Gals will try to maintain that level of competition this weekend when they play in the JCIV Tournament, which features some of the top teams across the state and is played at the OVVC in Louisville.

Daviess County will stay home for a 7:30 p.m. match Thursday against Hancock County.