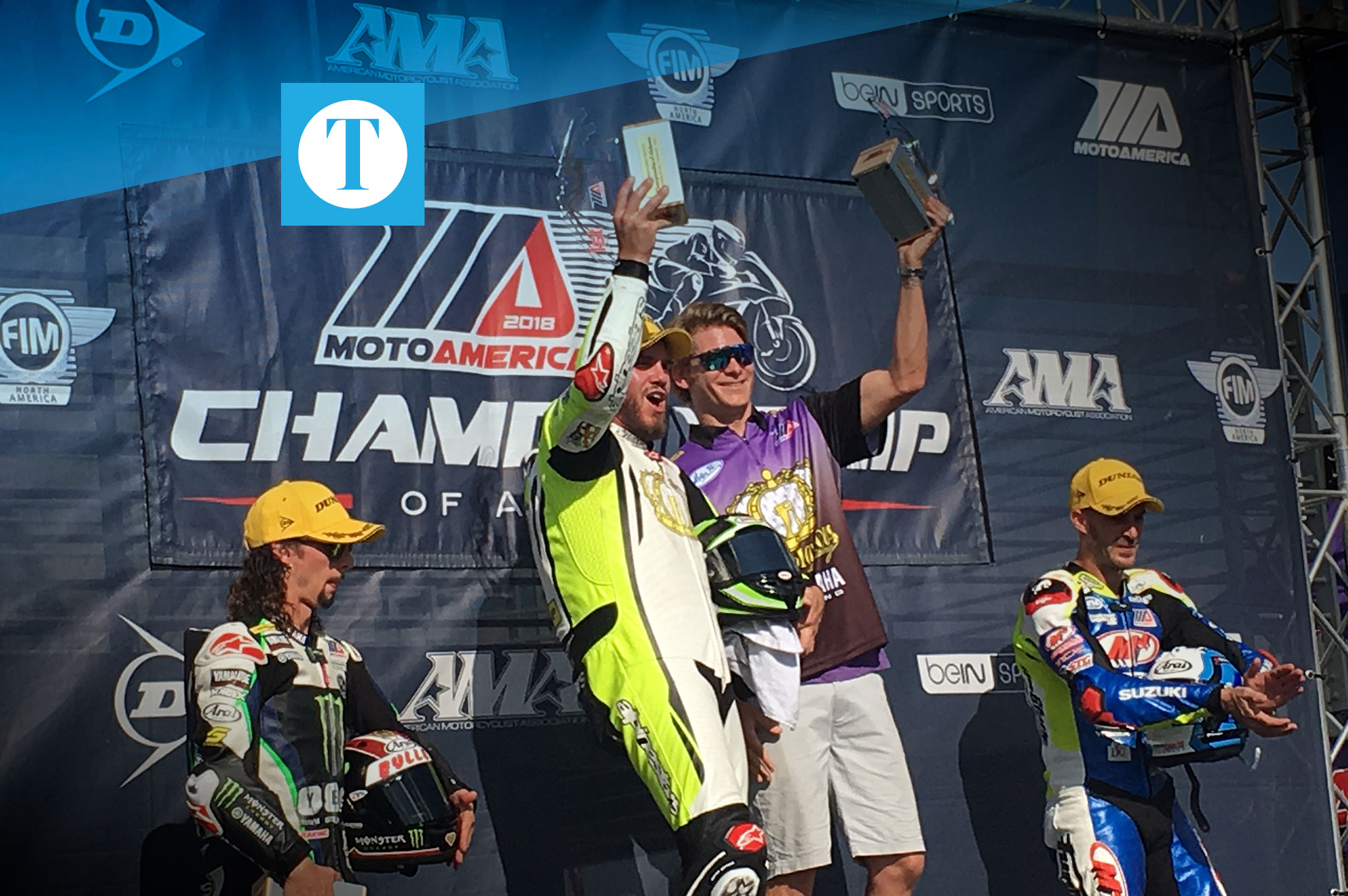 Owensboro’s Hayden Gillim and JD Beach did not celebrate with the typical champagne shower spray-down after their 1-2 podium finish at the MotoAmerica Supersport motorcycle race this afternoon at Barber Motorsports Park near Birmingham, Alabama.

Instead of shaking up the bottles, they each took a stack of cups and celebrated with their friends and family gathered for the podium presentation.

Both residents of Philpot, Gillim and Beach are close personal friends and training partners who consider Barber their home track since it’s the closest race to Owensboro on the MotoAmerica circuit.

“Being from Owensboro and having so many people up on the hills in the last corners for us is pretty incredible,” Gillim told Owensboro Times after the race. “And then seeing everybody come out for Roger (Hayden) and Jake (Lewis) and Nick (McFadden) is incredible to see. To do this in front of them is pretty awesome.”

“Racing is a family thing,” Beach added. “The last few years the crowds have been growing and it’s great to see so many people from home here. We hope we put on a good show and keep them coming back next year.”

With 11 wins going into this final weekend of the season, Beach had already secured the 2018 MotoAmerica Supersport championship, but that didn’t mean he wasn’t racing for the win. “This was a good race today,” Beach said. “I’m happy for Hayden, but I wasn’t just being nice. I really wanted to win this one. In some spots on the track he was quicker. We’re going to have it out tomorrow!”

The two friends battled the entire race, exchanging leads early on and running side by side in several turns and straightaways. But after two red flag stops for wrecks, Gillim pulled out front on the restart with ten laps to go. It took Gillim all he had to stay in front of Beach, but he secured the win by churning out his fastest lap of the race on the final lap.

Today’s win was Gillim’s third of the season. “The Rickdiculous Racing team gave me a great bike this year, and especially this weekend,” Gillim said in the post-race interview. “The team deserves this win.”

Following the Supersport race, Owensboro’s Roger Hayden and Jake Lewis finished 4th and 5th in the Superbike race. Roger Hayden brought fans to their feet as he passed Mathew Scholtz for third place with two laps to go, but relinquished the position to finish just short of the podium. The Sunday race will be Hayden’s final race of his career since he announced his retirement at the conclusion of this season.