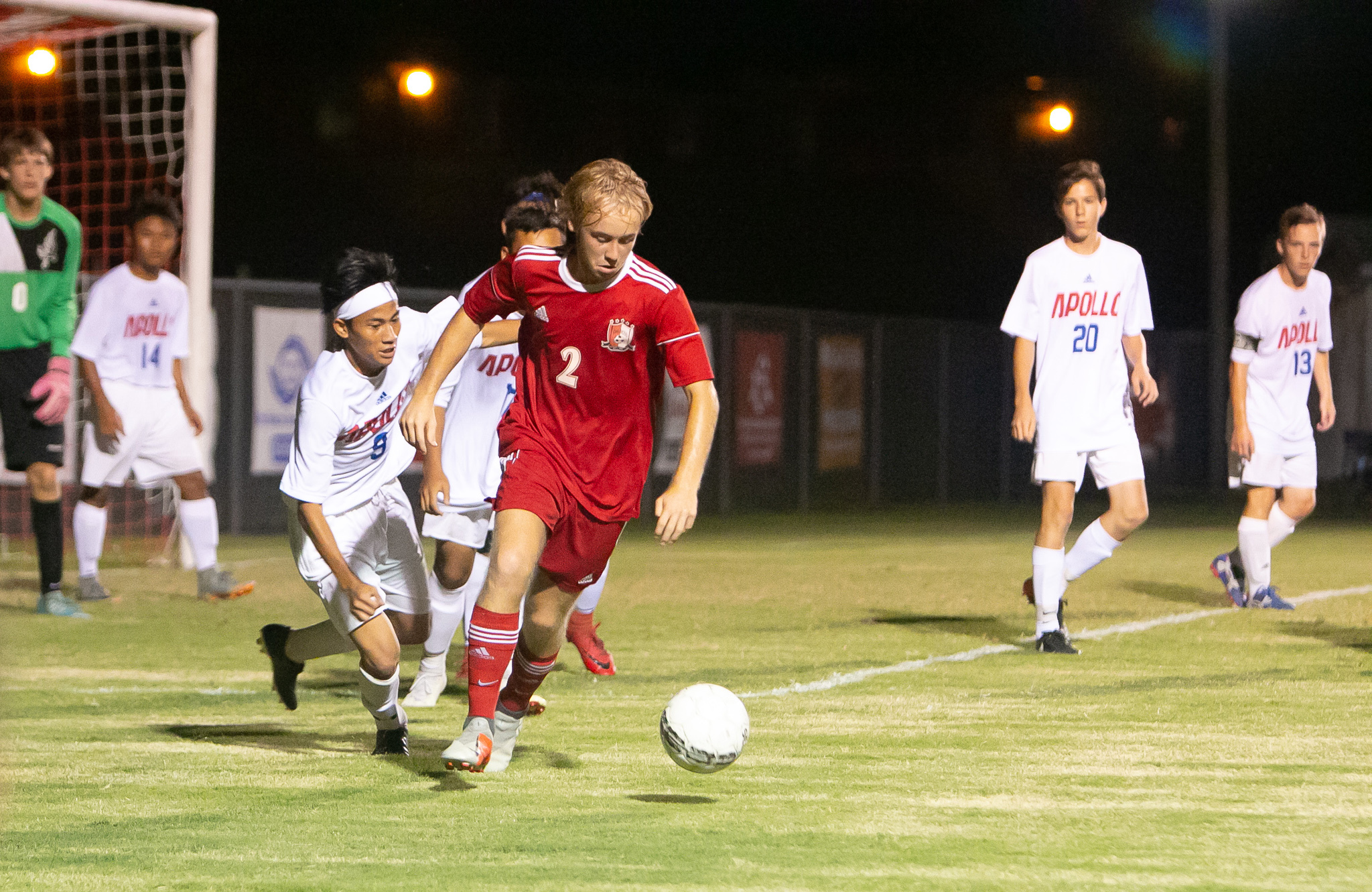 Daviess County wrapped up district play without a loss thanks to a 4-0 home victory over Apollo on senior night Thursday.

“Apollo made things very difficult,” he said. “They got the box very crowded. We were getting in behind them in the first half, but when we were ready to serve, it was crowded. They made things hard for us to break through.”

The Panthers only connected once in the opening half, when Hunter Clark crossed the ball in from the left corner. Jacob Boling was able to send in a header for the goal in the 22nd minute.

Though Daviess County had the advantage in time of possession, the Eagles were able fend off a diverse attack. Head coach Ryan Poirier was proud of the effort, but said DCHS has so many options on offense that it’s tough to stop them all. Eventually, it wore Apollo down.

“We tried to be really defensive and disciplined and stay with their runners, and we did a really good job of it for a long time,” Poirier said. “Unfortunately, you get tired.”

Sandifer said that’s all part of the gameplan — keep the opponents on their heels until they are too tired to have an answer on offense.

“We have steady and numerous attacks,” he said. “Teams spend a lot of time defending, and by the time the get a chance to attack, they’re a little tired. Trying to keep the ball is a struggle because they’re a little fatigued from defending.”

Sandifer said the Panthers had to make some halftime adjustments against the Eagles. Though they held a 1-0 lead at the break, DCHS needed to get wider in the attack. By spreading things out and opening up the middle, they got a few more opportunities.

The second goal came 8 minutes into the second half, when Brian Winkler sent in a corner kick to Clark, who punched it in for the score. Only 9 minutes later, Winkler guided a pass just in front of the net, were Boling was able to tap it in for his second goal of the night.

The final goal came with 16 minutes to play, and again it was Winkler with an assist. Some fancy footwork and a few passes in the middle left him with the ball in the right side of the box, where he crossed it to Tylen Terry for the goal.

Poirier said the Eagles didn’t get outworked — they were just facing a great opponent. The effort was something that’s been lacking lately for Apollo.

“They worked super hard,” Poirier said. “A couple of our last games, I didn’t think we worked as hard as the team we were playing. Tonight we played equally as hard, if not even harder, but they just have so much attacking power.”

With only a handful of games left before the district tournament, Poirier is hoping his team can build confidence and get on a roll.

“If we can find that every game, we’re going to be tough to beat,” he said. “We’ve got a lot of depth and a lot of talent. I’m hoping that they see the result of putting in that much energy and effort, and that it will click with them that if they really lay it all out there on the line, we’re hard to beat.”

Sandifer is also happy with where his team is, but said there’s still a few aspects of the game he’s hoping they can touch up before the postseason.

“We’re still not where we want to be exactly, but we’ve certainly progressed,” he said. “I still want to see us recognize what defenses are doing and what ball needs to be played. We get a little too one-dimensional sometimes with our attack.”

The Panthers hit the road Tuesday for a game at Greenwood. The Eagles are also away, with a game at Webster County.