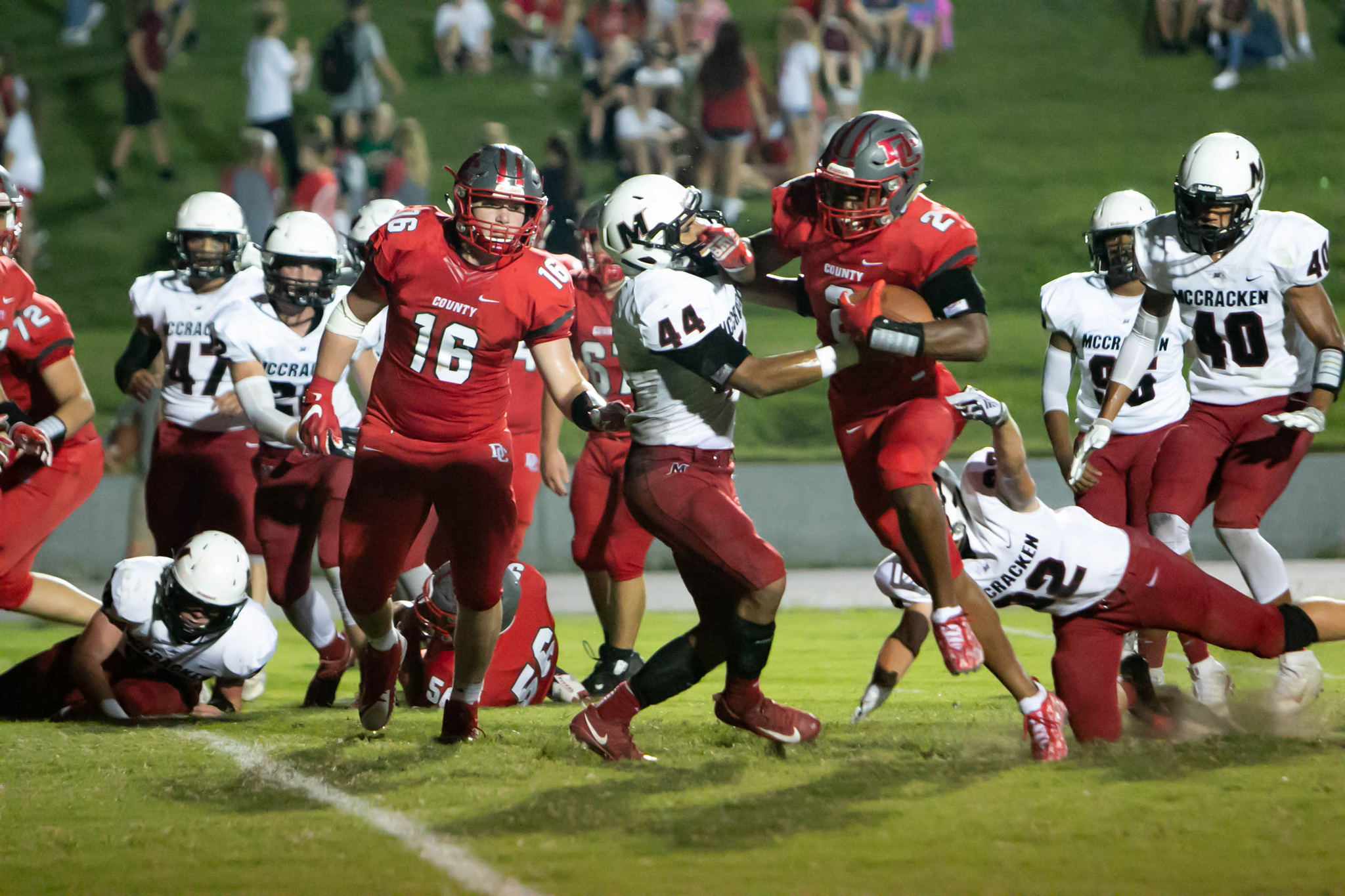 Daviess County fell 55-43 to McCracken County in the first district game of the season. | Photo by Ryan Richardson

A flurry of scores over a four-minute stretch in the third quarter proved too much to overcome as the Daviess County football team fell 55-43 at home to McCracken County.

DCHS head coach Matt Brannon said it was a tough loss to take after have a good week of practice.

“We felt like we put the time and preparation in to give ourselves a chance to win against a tough team at home,” he said. “It’s disheartening, but what we teach our guys is how to handle adversity. Your true character shows when you’re up against it.”

The Mustangs scored 22 unanswered points in the middle of the third quarter. The first touchdown came on their opening drive after they drove 64 yards down the field, and the 2-point conversion gave them a 35-28 lead.

The following Panther drive ended with Joey Cambron throwing a pick-6, and the Mustangs recovered a DCHS fumble on the ensuing kickoff. A quick 10-yard run had McCracken County holding a firm 49-28 lead with 4:59 left in the third.

Aside from that stretch, the teams played a nearly even game, and the Panthers got a strong outing from receiver Marquel Tinsley.

“He is a special player,” Brannon said. “Never is there a moment where he feels like we’re out of it. He had a fantastic game.”

After the Mustangs took a 7-0 lead less than 2 minutes into the game, Cambron hit Tinsley up the right sideline, where he easily outran the defense for an 84-yard score. A 2-point conversion put the Panthers up 8-7.

An interception by Landon Newman gave Daviess County a short field, and Tinsley scored again whey he took the snap out of the wildcat and ran it in for the touchdown. Cambron then connected with Blake Baker for an 18-yard score before the Mustangs went on a run of their own.

McCracken scored three times to go up 27-22 with 24 seconds to play in the half, but the Panthers had an answer. Cambron heaved a pass downfield as time expired, and Tinsley went up between two defenders to come down with a 43-yard touchdown. The 2-point conversion was no good.

Brannon said aside from the miscues in the third, it was a good effort. Against a good team, though, it doesn’t take much to get too far behind.

“We knew it was going to be a battle,” he said. “We told them it’s got be four full quarters. You can’t rest on your laurels when you do well and think that you’re done.”

Cambron scored on a 1-yard keeper midway through the fourth, but the Mustangs added one more touchdown to stretch the lead back out. The Panthers got a final touchdown from an 18-yard pass to Baker.

Brannon said the coaching staff has to accept some of the blame for the loss.

“It hurts to not execute and not get it done,” he said. “I stood in front of the team and said as a coaching staff, we have to own it. We’ve got to do something better to get the team to execute and play four full quarters in all three phases of the game. We can’t rely on one side of the ball or the other to pick us up.”

Brannon said he’s obviously not happy with a loss, but he can take some solace in knowing the Panthers are in the same position they were in last season — they’re 3-2 and coming off a loss to the Mustangs as they head into the bye week.

Last year, they won five of the next seven games on the way to the third round of the playoffs, so he knows the team can use this as a chance to improve again.

“We figured it out last year,” Brannon said. “We’ve got to continue to push forward and work to get better every week.”