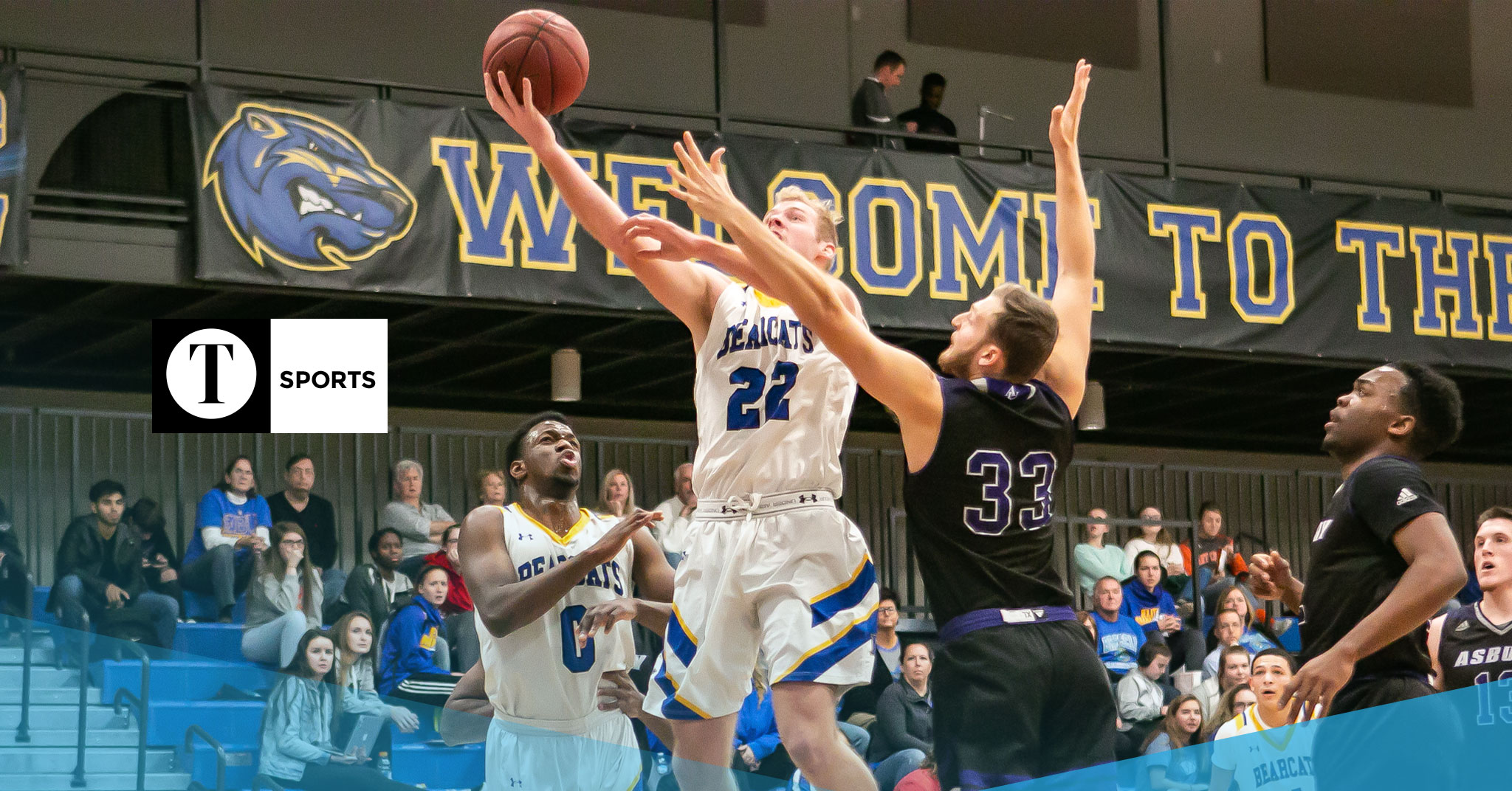 Dillon Geralds goes up for a shot for the Brescia men's basketball team in their win over Asbury on Wednesday. | Photo by Ryan Richardson

A pair of tight games both came out in favor of Brescia University as the men’s and women’s basketball teams walked away with come-from-behind wins over Asbury University to open conference play.

The women started Wednesday’s doubleheader at home by using a late run to pull away for a 72-62 win, and the men were able to hold on for an 84-81 overtime victory.

Both teams are now 1-0 in River States Conference play and will travel to Alice Lloyd College on Saturday for their next RSC games.

MEN’S GAME
The Bearcats (4-6) fell into an 8-0 hole in the first couple of minutes but slowly chipped away and tied the game midway through the half. An 11-2 run for Brescia featured back-to-back dunks by Kayode Daboiku to help them take a 38-34 lead at the half.

Head coach Brian Skortz said the slow start has been an issue this season, but was happy they were able to overcome it.

“We talked yesterday in practice of the things we needed to do to be successful, and that starts with defense,” he said. “We didn’t start off real well, and that’s been a problem. We started to get our tempo going — rebounding the basketball and getting back in transition.”

Daboiku continued his strong game with a pair of short buckets in the second half, but Brescia was never quite able to pull away.

Asbury managed to take the lead a few times, though big plays on both ends from Dillon Geralds helped provide an answer for the Bearcats. In the second half alone, he had 12 rebounds, nine points and six assists.

“He’s an important part of our offense,” Skortz said. “Tonight, he did a better job of not trying to force offense. He hit a couple big shots. He played a really solid game and defensively did a lot better than he’s done in the past of staying in front of their shooter.”

Brescia’s 76-70 lead with 32 seconds to play wasn’t quite enough, and Asbury forced overtime. The Bearcats went back on top with a putback by Daboiku and were able to put the game away late in overtime.

Skortz was glad they fought back to start conference play with a win.

“Overall, I’m please with how we responded,” Skortz said. “I was pleased with how we responded after we had the lead and gave it up in overtime. We fought right back into it. It’s a key win in the conference. Every game at home is important. In our league this year, anybody can beat anybody any given night.”

WOMEN’S GAME
Though they won by 10 points, the Bearcats (2-7) played from behind for most of the night. They trailed by as many as 10 in the second quarter before closing the halftime deficit to 36-30.

A pair of free throws by Cassidy Moss gave Brescia their first lead with three minutes to go in the third quarter, but Asbury went back in front 54-52 heading into the final period.

“We came out in the fourth quarter and started playing a little bit better defense and limiting them to one shot,” he said. “After that we got to the free throw line and put the game away.”

A 3-pointer from Aaliyah Rogers gave Brescia the lead for good early in the fourth, though it was three quick scores by Catherine Dunn, Rogers and Jayde Robinson that really put the game away.

Brescia picked up their second consecutive win after starting the season 0-7 against strong competition. Gray said he’s happy to get another victory but doesn’t want to slow down.

“I’m not satisfied,” he said. “It’s still a process. It was a good win. We have a tough schedule this year, and I did that for a reason. I believe my team has already been battle tested.”

WIth an improved conference, Gray said it’s important for a young Brescia team to keep working hard. He said they’re still trying to learn the new system, and he wants them to play a little more transition and run the ball up the court.

Gray said the team showed some good signs in the fourth quarter but needs them to play like that from the beginning.

“We have to keep winning and keep grinding,” he said. “We have to learn how to make shots. We put up a lot of shots and weren’t hitting anything, but we had something to fall back on and that was our defense. I’d like to have a team that clicks on all cylinders. Each and every day is going to be a grind.”