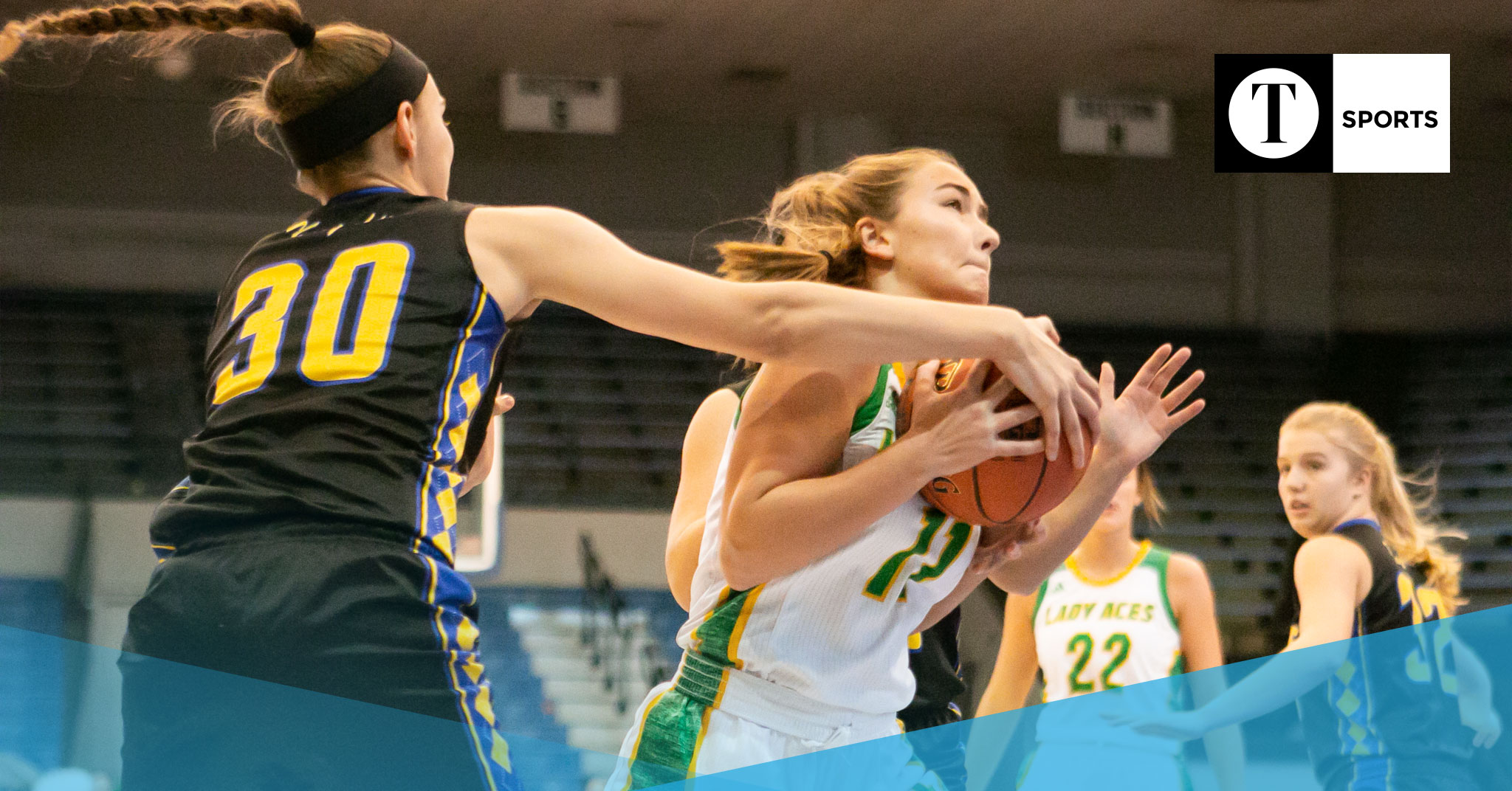 Owensboro Catholic's Spencer Harvey (11) goes up for a shot against Castle on Monday night at the Sportscenter. | Photo by Ryan Richardson

It was a physical home opener for the Owensboro Catholic girls basketball team, and the Lady Aces couldn’t keep up late in Monday’s 66-45 loss to Castle.

The Knights (6-0) are ranked No. 9 in Indiana Class 4A, and they used a pesky defense to create opportunities all night. The Lady Aces (0-1) ended the game with 25 turnovers.

“We threw a lot of long passes over the top,” said OCHS head coach Michael Robertson. “We were inches away from getting it.”

The Lady Aces also struggled at the free throw line — hitting 9-of-15 attempts — but Robertson said it was a rough night overall offensively.

Neither team had much going early, though Hannah McKay helped OCHS stay close with five points in the first period, which featured six lead changes before Castle went up 11-10 in the final minute.

A bucket from Mackenzie Keelin followed by a 3-pointer from Spencer Harvey put the Lady Aces on top 15-13 early in the second period.

Castle answered with their own three, and they used a 14-2 run over the final five minutes to take a 27-17 advantage into halftime. The Knights used the third period to really separate themselves, outscoring the Lady Aces 20-12.

The closest OCHS got in the fourth period was after a pair of free throws by Sarah Beth Clemens cut the Castle lead to 52-37.

Robertson said his players weren’t quite ready to match up with a team that rivaled the size and strength of the Lady Aces. He said offensively, OCHS wasn’t executing against an physical opponent.

“Every time they put a hand on us, we pulled back,” Robertson said. “We retreated instead of trying to drive through that and get the whistle.”

He knew heading in that Castle would be a tough opponent. Last year, the Knights rolled through the season undefeated before being upset in the regional semifinal. This year, they’re off to a perfect start again.

Playing against a top team, Robertson said, is always a good indicator to see what needs to be improved.

“It was an excellent test,” he said. “They are one of the better teams in the state of Indiana. I don’t know how many teams we’ll play that will be as physical as they are. I loved it it as far as seeing what we’re made of. I’m not discouraged by us. I’ve got a little something to work with now.”

The Lady Aces have a few days off, returning to action Thursday when they host Meade County for the Lady Waves’ season opener.

With one game under their belt, OCHS knows what steps they need to take to move forward.

“We’ve got to get better,” Robertson said. “We’ll get back into the gym. We know what we need to work on. We’ll be alright. I have faith in this team.”