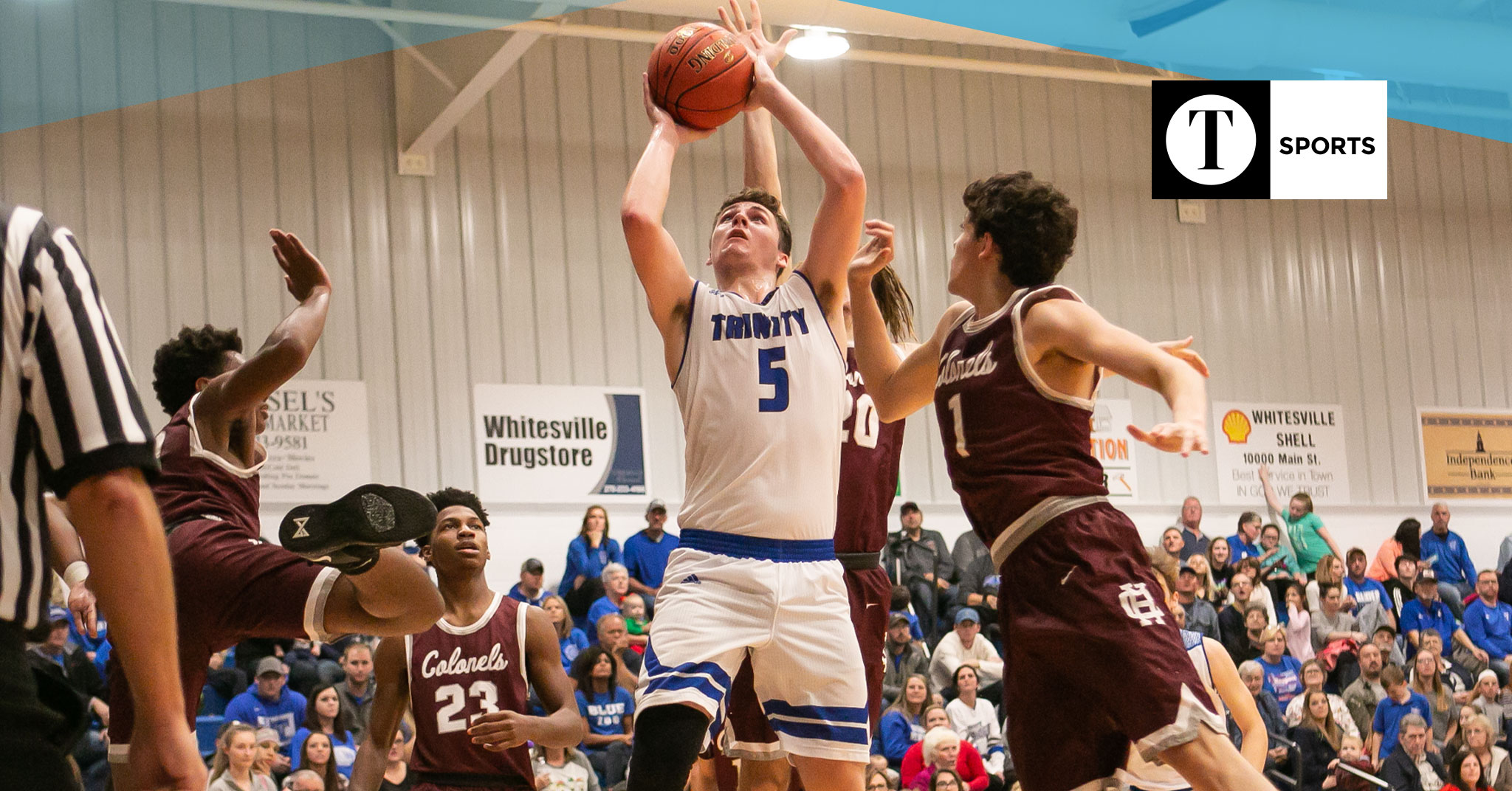 Cameron Wright goes up for a shot in Trinity's loss to Henderson County at home Thursday night. | Photo by Ryan Richardson

A late comeback bid came up just short for the Trinity High School boys’ basketball team Thursday night as they fell 64-60 at home to Henderson County.

The Raiders (1-1) trailed by nine points late in the fourth quarter before closing the deficit to 62-60 with a minute to play. They couldn’t connect on a few contested shots in the final seconds, and a jumper at the other end sealed it for the Colonels (1-0).

Trinity head coach Nathan West said the team got off to a rough start, and it left them fighting to catch up for much of the night.

“I didn’t think we executed our game plan early,” he said. “We knew they were going to press the whole time. That’s the majority of their offense. We were standing there watching a little bit too much and gave up some offensive rebounds. When we did execute and got to the foul line, we didn’t finish.”

The Raiders only hit 9 of 17 free throw attempts, a percentage West said the team can’t afford during close games.

Despite the loss, West said he did see some positive signs in only the second game of the season. Trinity was able to create multiple opportunities throughout the game thanks to several offensive rebounds.

Most notably, Cameron Wright, Brenden Wathen and Trenton Morris combined for a handful of putbacks to help keep the team within striking distance.

“Cameron is a great offensive rebounder and Brenden is a fantastic athlete,” West said. “Those guys always get a lot of our offensive rebounds. Trenton does, too. That’s one of our strengths when we can do it. We just have to finish. I though we rushed some of our shots.”

The Raiders fell behind early in the game but slowly fought back to go up 22-21, though the Colonels scored the final eight points of the first half for a 29-22 lead.

Henderson County took it’s biggest lead at 55-45 in the fourth quarter before the Raiders mounted their final comeback attempt.

West said he was happy with how the team responded even though they didn’t come out on top. Going forward, he said he hopes the team can play well from the opening tip.

“They adjusted, that was the biggest thing,” West said. “We got down big in spurts, but they played hard. My big thing is I have to get them to play smarter not harder. They always give me all their energy. That’s not the problem.”

The Raiders will return to action Saturday with a trip to Apollo, a team with which West said he’s very familiar.

“I kind of know what they’re going to do,” he said. “We played them twice this summer. We’ve got to knock down those shots when we’re open. Hopefully we can have a bounce back game.”

Home » Sports » Late run not enough for Trinity in loss