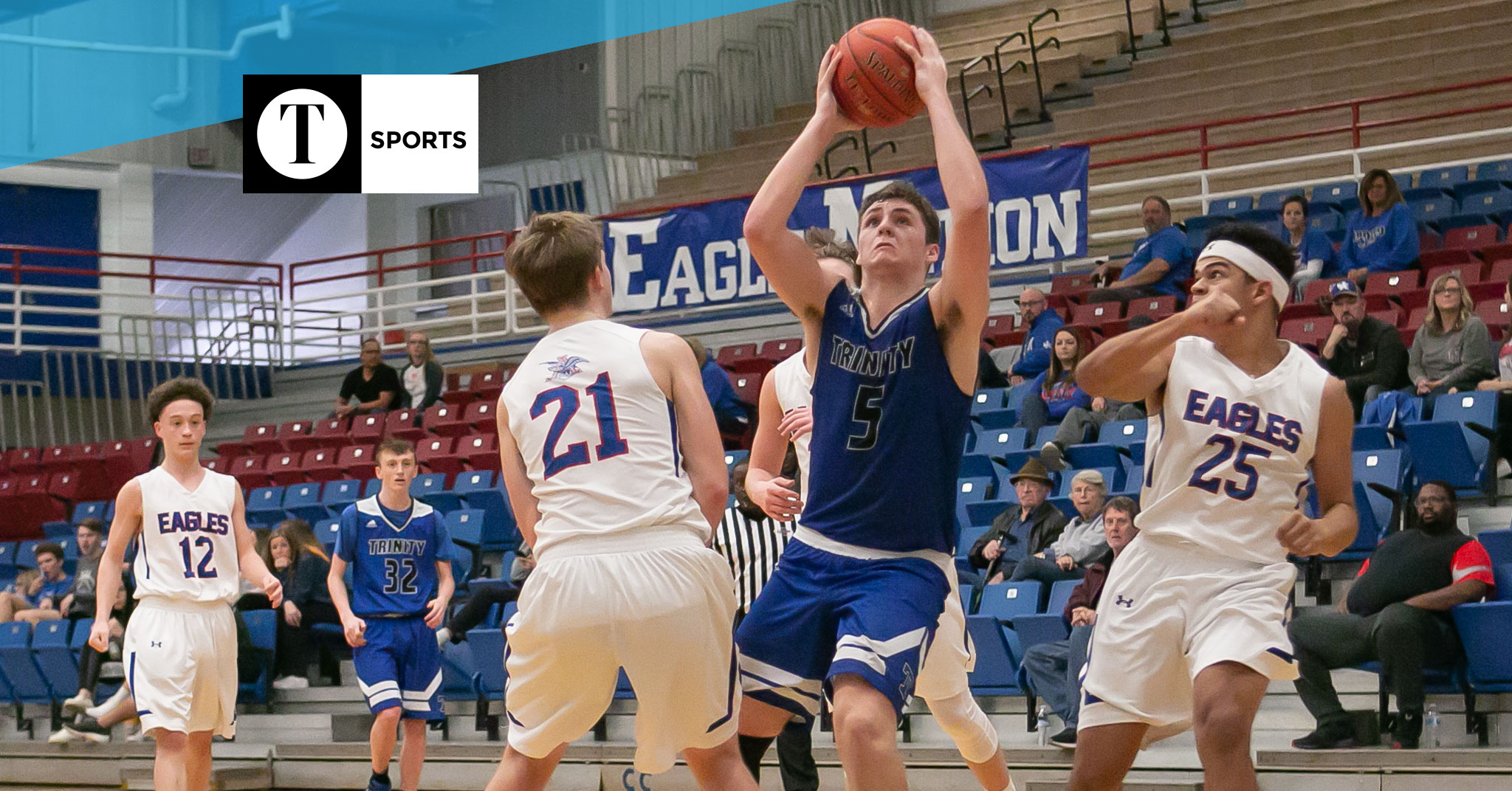 Cameron Wright looks to put back an offensive rebound for Trinity against Apollo on Saturday. | Photo by Ryan Richardson

The Apollo High School boys’ basketball team kept the game close through the third quarter, but Trinity High School pulled away late for a 65-50 win.

The Eagles (1-4) dropped their third consecutive game at home, and head coach Steve Barker said the team ran out of gas after using much of their energy in Friday’s loss to Warren Central.

The Raiders (2-1) took down Apollo for the first time in several years. Head coach Nathan West said nerves played a factor early, but his team was able to commit to their plan and step up late.

“I think we settled down a little bit,” he said. “We were rushing everything. It was one of those things where Apollo is an intimidating name around Whitesville because of the history, so I think that probably played into it.”

The Eagles stayed within striking distance much of the way before the Raiders’ full court press and active defense started forcing turnovers.

“We try to take advantage of matchups whenever we can,” West said. “We really have a smaller lineup overall so we’ll try to exploit that. We’ll let some of their bigger guys who maybe aren’t as comfortable handling the ball catch it so we can get a steal or trap out of it.”

Barker said the Eagles have a turnover bug right now, but he knew it would take some time to iron out all the kinks. With a freshman point guard surrounded by four sophomores, Apollo deploys a roster that had no varsity minutes until last week.

“It’s going to happen when you’re young,” he said. “I’m trying to keep them upbeat but it’s hard when you lose two games on a Friday and Saturday night, especially with the success we had last year and all the years at Apollo.”

A trio of Raiders — Joe Brown, Trenton Morris and Cameron Wright — combined for 42 points to help finally beat the Eagles. West said he has a lot of respect of Apollo, and the win should help Trinity gain confidence going forward.

“It’s a well-coached program,” he said. “They’ve got strong kids that were rough with us, and I think that will help us in the long run.”

On the other end, Barker is trying to keep morale up while the team searches for another win. He knows they can find success, as the 2017-18 season got off to a relatively slow start before Apollo eventually ended their season with a state tournament appearance.

“I told them they’re not going to get this one back,” he said. “When you walk out, leave it alone. We’ll come back Monday and get ready for Webster (County) on Tuesday and (Owensboro) Catholic on Friday.”

Apollo is on the road for both of those games, with Friday’s meeting marking the start of district play.