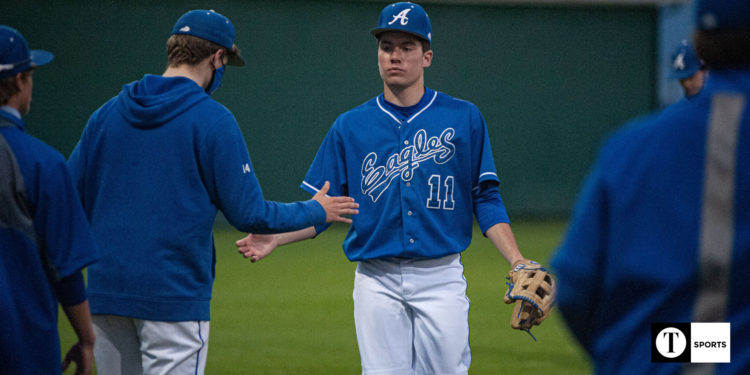 After finding themselves down twice during Thursday’s 9th District matchup against Daviess County, the Apollo Eagles turned into something that coach Mason Head they’ve embraced this season as they’ve taken gritty and the sloppy and turned into a No. 2 seed in the district tournament and 14 wins on the year.

While Head said after Wednesday’s loss to Owensboro Catholic that they may not know their style of play, they know their mentality.

“We were dogs,” he said. “That’s what they were. It was ugly but they were dogs. Good teams find a way to win when they poorly. We did not play to our standard tonight and I think every single guy in that dugout would tell you that but we found a way to win. That’s a dog mentality.”

The Eagles mentality is what drove them to a 5-4 win over county rival DC as even in the final frame, they needed to be dogs to get out of a jam.

With the bases loaded and no outs in the final frame, senior Landon Hamilton relieved Harrison Bowman. Hamilton went pop out, strikeout, pop out to win the game and give the Eagles the No. 2 seed in the 9th District Tournament.

Head said when it comes to the dog mentality, his players aren’t away of another way.

“We don’t allow anything else, they don’t know anything else. They’re fighters,” he said. “You can punch them in the mouth 100 times and they’re just going to look at you with bloody teeth. That’s their mentality and I would go to war with any one of them. No

Daviess County scored on a balk to start the game in the top of the first and added another for a 2-0 lead heading to the bottom half of the second inning.

With two runners on in the frame, Hamilton hit a single to score both runners and tie the game at 2-2.

Errors gave DC another lead in the top of the fourth as the Panthers went up 4-2 going into the bottom half before three Apollo runners scored to give the Eagles the last lead of the game.

Bowman picked up the win for the Eagles after he struck out nine and allowed two earned runs in four hits in six innings of work.

“He threw six, 120-something pitches, he fought his heart out,” Head said of his senior pitcher. “He did everything he could have done on the mound for us today.”

Tanner Klee also had a solid game for the Eagles with a double and two RBIs while Sam Holder added two hits and an RBI from the No. 9 spot.

Cason Troutman, Jackson Loucks and Hunter Payne each had a hit and a run for the Panthers while Loucks was dealt the loss on the mound despite a solid outing.

Daviess County will try to bounce back today as they host Owensboro Catholic in another 9th District tilt while the Eagles go to Union County to try and get their second win in as many days.