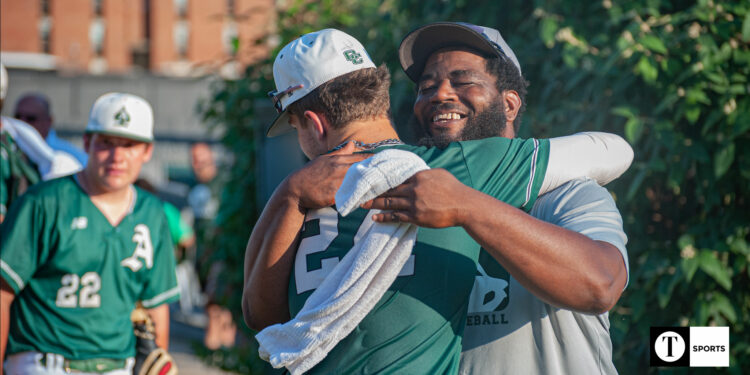 Before Owensboro Catholic took the field Saturday at Nick Denes Field in Bowling Green for their semi-state game in the KHSAA State Baseball Tournament, the Aces needed some luck, timely hitting and late-game heroics to get through the 3rd Region Tournament.

On Saturday, the Aces looked as if they were going to continue the “Cardiac Catholic” mentality that got them to the state tournament but after a valiant effort in the bottom of the seventh to tie the game at 3-3, the Aces fell 4-3 in eight innings to the 2nd Region champion — the Lyon County Lyons.

Acting head coach Tyler Tichenor said it was a difficult day as the Aces had just three hits when they entered the seventh inning.

“It was tough on us because we really couldn’t get anything rolling to start,” he said. “We couldn’t put the hits together to put a couple runs on the board.”

The Lyons didn’t waste any time in getting on the scoreboard as they scored two in the first on a Gunnar Bingham triple.

Lyon County added another run in the fourth when they got the leadoff man on.

Excessive heat pushed the start time of the game back to 4 p.m. and even when the game was underway, players were held in the dugouts a little longer than normal between frames to give them a chance to cool off.

“In between innings, we had to sit for two or three minutes,” he said. “A lot of high school players stand there thinking about the bad at-bat, being down or feeling defeated. We never really got that momentum to sit in the dugout for a few minutes and reflect on something positive. It was tough for the guys but I’m proud of the way they fought. They didn’t give up at the end.”

Down 3-0 heading into the bottom of the sixth, the Aces put their first run across when Luke Evans scored after he reached on an error to start the inning.

The deficit was 3-1 going into the bottom of the seventh for Catholic and Tichenor’s message to his team was to think about their two seniors in Finley Munsey and Hunter Small.

“Do whatever it takes for this to not be your last inning you play with them,” he told the team. “I challenged them and they responded. They didn’t give up.”

Catholic scored two in the frame to extend the game as Jamison Wall and Sam McFarland scored in the inning.

Wall scored on an RBI single by Evans while McFarland scored on a sacrifice fly from Munsey.

Lyon County didn’t trail for long as they scored in the top of the eighth when Jackson Shoulders singled to score the eventual winning run.

Catholic tried to make another run in the bottom of the eighth after E Munsey singled to start the inning.

Tichenor said he knew what each batter in the lineup was capable of and that any batter could put the ball in play.

“It was tough for me coaching third base in that last inning. The first guy got on and I thought do I bunt, do I not bunt,” he said. “I know anybody is able and capable of getting a hit. I tried to play the game of baseball and bunt him over but the ball didn’t roll our way.

“That’s a good thing about coaching a team like this is one through nine we can hit. It’s always a nice feeling to have that. It’s never a bad feeling knowing your team can hit.”

Catholic couldn’t plate the tying runner as McFarland grounded out to end the game.

Tichenor said the Lyons did what they needed to do.

Catholic now looks toward next season as they’ll return a bulk of their lineup after its 32-6 season.

Tichenor said he wants them to remember how they felt on Saturday come next season.

“You know how it feels,” he said will be the message next year. “We’re going to start day one at practice and we’ve got to be the best team we can be. Whatever that takes. Losing is a little easier because Hunter and Finley get to go on and play college baseball so it’s not the end of their career. I think next year’s class is going to be just as special because we’ve got a few sophomores and freshmen coming up that’ll fluctuate and fill those two holes. Keep their confidence high and know they were a step away this year, you could even be better if you put in the work.

“I don’t see any reason next year we couldn’t go further than this.”