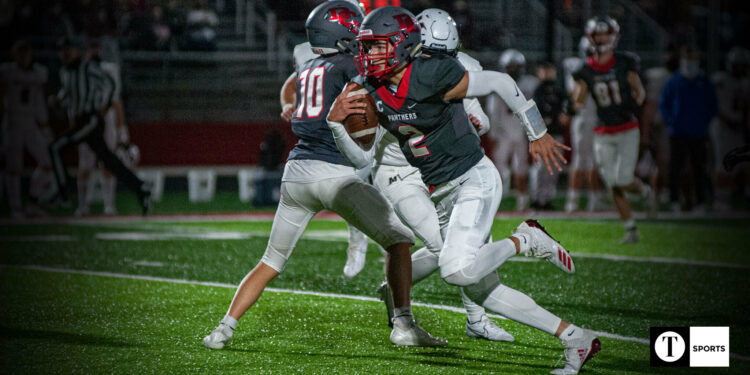 Daviess County’s Joe Humphreys is going into his final year as a Panther after putting the state on notice last season with more than 1,500 passing yards and 21 touchdowns.

The DC signal caller currently has four offers as Appalachian State, Eastern Kentucky, Middle Tennessee and Murray State have said they want Humphreys leading their offense but after solid finishes at multiple events, including the prestigious Elite 11, Humphreys is ready for more.

Humphreys has multiple camps he’ll attend in the next week as Kentucky, Kent State and maybe Cincinnati will host the quarterback, along with many others.

Humphreys said he hoped his junior season would set the tone for his final year and it certainly has lived up to the hype but he said he’s not worried about where he fits in with other players in his class.

“I don’t like to pay a whole lot of attention to rankings,” he said. “I don’t really think they mean a whole lot, honestly.”

As he competes in multiple events this summer, Humphreys has lined with some of the best quarterbacks in the country. He said he uses it as a learning experience.

“It’s pretty neat watching guys like Ty Simpson and Nicco (Marchiol),” he said. “Watching their mechanics and how smooth they are.”

While Simpson and Marchiol are known across the country, another quarterback has been beside Humphreys most of the summer – Owensboro’s Gavin Wimsatt.

Humphreys and Wimsatt have grown up together and have even been teammates in their younger years.

Humphreys said having Wimsatt at events really helps his confidence.

“It’s made it a lot easier,” he said. “It can get overwhelming seeing all these high-profile athletes but it’s always good to have somebody else there with you.”

With his senior season just a few months away, Humphreys said he’s focusing on his pocket presence and staying comfortable.

One person that’s helped with that is DC quarterbacks coach Dalton Oliver.

But Humphreys said Oliver isn’t the only one that has his back.

“We have an awesome coaching staff that puts together great gameplans and schemes for each week,” he said. “They do all that and then we go out and execute. It makes it easier on us.”

Humphreys returns his favorite weapons in 2022 as Bryson Parm, Decker Renfrow, Isaiah Tomes and Max Dees are all back for the Panthers.

He said the chemistry they have will be key next season.

For Humphreys, he said he’s focused on doing everything he can for his team in his final year in a Panther uniform.

“I think it starts with getting everybody on the team on board and knowing that we can win every game we go into,” he said.