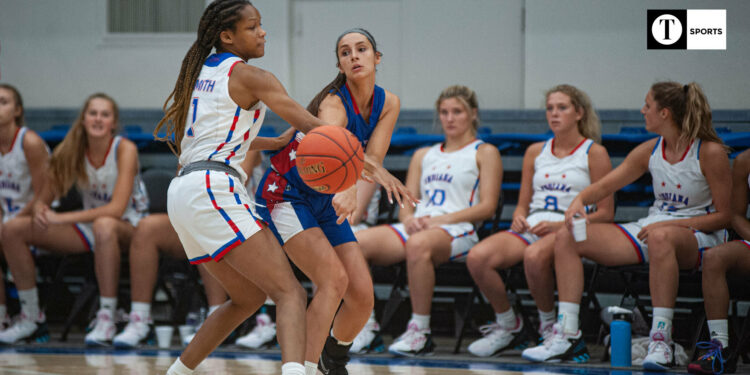 The annual Kentucky/Indiana All-Star Game made its return to the Owensboro Sportscenter on Friday night with the Indiana squads pulling a sweep over Kentucky.

The Indiana girl’s team won 69-58 in the first game of the night and the Indiana boys followed it up with a 93-70 in the nightcap.

Former Apollo E-gal Amber Dunn found minutes with the Kentucky team’s second brigade in the first game of the night as she finished with two points and five rebounds, including two on the offensive end.

“At first, I was a little nervous but then I settled in,” Dunn said. “We have a good team so I knew I could trust my teammates to get the job done. We came up a little short but we fought hard.”

Apollo coach Natalie Payne was in attendance with her daughters sporting signs in support of Dunn.

Payne said it’s a great moment for not only Dunn but the program and the surrounding area.

“It means so much,” she said. “The girls in this area look up to these players in the area high schools and so to see Amber out there performing and getting after it, being scrappy, the things she always does. For the home crowd to see her, it’s just awesome.”

Kentucky held strong for the first half as it was tied 29-29 at the break but Indiana held the Bluegrass to just five points in the third to put the game away in the second half.

Dunn said they played hard and gave it their best on the defensive end.

Throughout her time on the floor, Dunn could be seen continued what she did for the E-gals last season as she was on the floor, fighting for loose balls. She said continuing to do that is key at any level.

“A lot of coaches say that defense wins games and I think that’s true,” she said. “Whoever works the hardest on the offensive boards, rebounding and getting after it on defense usually comes up winning.”

Payne said she’s glad her former player isn’t afraid of the hard work and wants the younger players in the crowd to take note of the defensive intensity.

“I would like for them to see how gritty the teams have been on defense,” she said. “They’re not above doing the scrappy things like getting on the floor, battling and blocking out.”

The Indiana roster was filled with Division I talent as Purdue, Michigan, Ohio State, St. John’s, Arizona State and Butler will all have members of the squad on their teams next season.

“Indiana has some Division I athletes, more than the Kentucky team but they’re battling,” Payne said. “They’re head to head and it’s a great atmosphere. They’re competing.”

Dunn said she knows the competition at Lindsey Wilson will be tough next season but this weekend helps her to know she belongs.

In the boy’s game, Indiana cruised to the 93-70 win with Luke Brown leading the way with 18 points for the Hoosiers. Former Frederick Douglass standout Deshaun Jackson led Kentucky with 20.