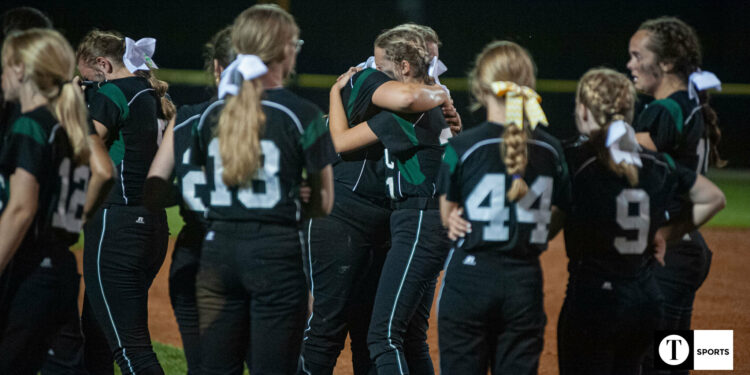 It doesn’t take much for the tides to turn in softball as one inning, one hit or even one bad pitch can change the game and for the Owensboro Catholic Lady Aces, that was the fifth inning Monday against Hancock County.

Catholic led 3-1 heading into the bottom of the after they just tacked on their third on a Bailey Hamilton sacrifice fly to score Camille Conkright but that would be the last run the Aces would find.

Hancock County scored four runs in the bottom of the frame on several walks and a couple of hits to give them the final lead of the game at 5-3 to advance the Lady Hornets to Tuesday’s 3rd Region Softball Tournament championship against the Daviess County Lady Panthers.

“I’ve coached these seniors since they were seven years old,” he said.

Catholic got on the board in the second on an Addison Tignor single that scored two runs.

Even though they got their leadoff batter on base in the final four frames, the Lady Aces only scored in one of those innings.

“One play here or there, it changes a lot of things,” Phelps said. “Emotions come in there. I’m proud of the way they fought. They could have easily given up on a couple of bad innings, a couple of bad plays. Little plays right there, come back and haunt you. We talk about doing the little things right and it didn’t go in our favor. They (Hancock) played a great game over there too.”

Hannah Carter, Hadley Phelps, Gracie Jennings, Gabrielle Parson and Hadley Phelps were Catholic’s five seniors this season and Phelps said it’s been a journey for all of them.

“They led in different ways,” he said. “Some girls lead by their work ethic but throughout the season, they became a tight-knot group. It took them a long time because they didn’t start out like that but this group here, they got together toward the end of the year and it made a difference.”

After the game, Phelps said Carter spoke to the younger players as he knew they always wanted to do the best they upperclassmen and wanting them to have the best experience possible.

“The younger ones, they feel the pressure of wanting to do well for the older girls,” he said. “The older ones are thinking this is my last at-bat.”

Catholic now looks forward to next season where they have several starters returning, including pitchers Brooke Hamilton and Lexy Hatchett.

Phelps said he wants them to worry about one this before next season.

“Remember that feeling,” he said. “When you’re sitting there in the offseason and you’re not thinking about it, that’s why we put all this time in.”