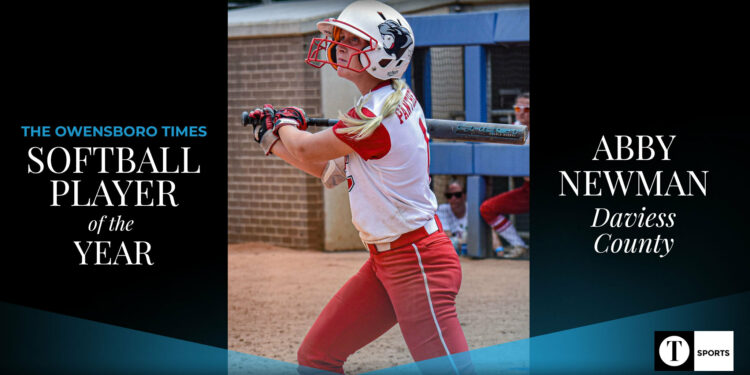 Following a stellar season with state-runner up Daviess County, Abby Newman has been named The Owensboro Times 2021 Softball Player of the Year.

“I am so honored and grateful to receive this honor as the Owensboro Times Player of the Year,” Newman said. “There are so many talented players in our area so that makes receiving this recognition even more special. I can’t think of a better ending to my high school career.”

Newman ignited a spark for the Lady Panthers offense all year long, setting the tone at the top of the lineup.

The future Western Kentucky Hilltopper had a batting average of .512, nearly guaranteeing herself as an automatic base hit.

She paired that with 28 RBIs and seven stolen bases, across 38 games played on the year, leading Daviess County to a 34-7 record.

The things that the Lady Panthers were able to accomplish in Newman’s senior season will forever be engraved in Daviess County softball history and it is something that she will always cherish.

“This season our team made history and that is definitely something I won’t forget,” Newman said. “To be able to make it to the last day possible of the season and finish with a state runner-up title in Kentucky is something so memorable for the DC Panthers. This season was so much fun because our team was close on and off the field, we trusted each other, and we shared so many laughs and good times throughout the season.”

Daviess County Head Coach John Biggs Sr. said that along with her explosive play on the field, her commitment to helping the team grow together all season long was what really set her apart.

“Abby had a tremendous year for us this season on & off the field…,” Biggs Sr. said. “She had another solid year at shortstop and was the anchor in the infield. As much as she did between the lines, her greatest contribution to our success was what she did outside the lines. Her leadership and enthusiasm meant so much to our State Tournament run and finish as State Runner-Ups.”

Newman has spent years in Daviess County’s program and so much extra time working on her game before entering high school to get to where she is now and she credits that relentless work ethic as to what has turned her into the softball player that she is today.

“I believe all the sacrifices I have made for this sport made me who I am today,” Newman said. “Everyone is going to work hard, but you have to work harder. All of the traveling, late nights, and countless hours I’ve spent perfecting my game paid off. The wins, the great defensive plays, the successful at bats are so rewarding, but it’s the losses, the slumps, and the games and seasons when I wasn’t as successful that taught me to stay humble, work harder and be the best teammate possible.”

Now the superstar shortstop is heading to WKU for her freshman year, looking to continue to grow as a softball player. While she’s ready for that next step, she’ll never forget the times she had with her teammates and knows that Daviess County softball will always hold a special place in her heart.

“The special bond that this team had is what I’ll cherish and remember the most about my high school career,” Newman said. “This team felt like a family. I would do anything for the girls or coaches and I know I have that same respect in return. Looking ahead at attending WKU, I am excited to be able to continue my softball career and for the many opportunities that lie ahead as a Hilltopper. A new beginning is always very exciting but I will definitely carry all the great memories with me. Once a Panther, Always a Panther.”