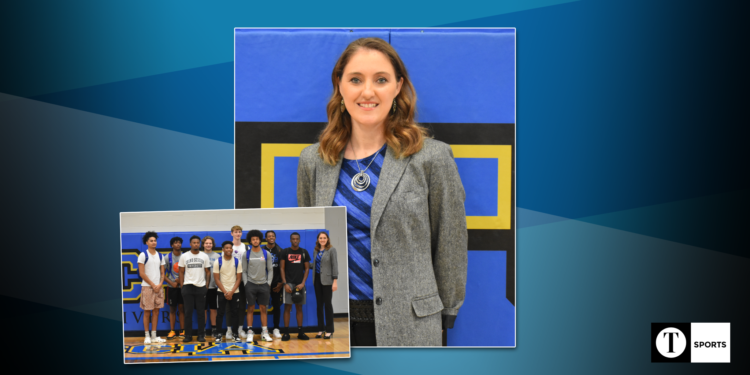 Sarah Gayler is continuing to add to her impressive resume by joining Brescia University as the Director of Athletics and the first woman to be named a men’s basketball head coach in NAIA history.

Gayler’s catalog of basketball experience begins with her playing days, where she attended the University of Arkansas-Fort Smith. While there, the Lions earned Conference and Regional Championships, as well as owning the title of National Consolation Champions.

After receiving her Associate in Arts, she made her way to the University of New Orleans to wrap up her collegiate career while getting her Bachelor degree in Business Management.

When she first began her career outside of college, she became a coach and led Carrollton Christian Academy and led them to an undefeated record in conference play while also winning a Regional Championship.

She then went back to playing, joining a tour team in Budapest, Hungary, before playing two years of Semi-Professional basketball in Texas with the Dallas Diesel Women’s Team.

Gayler’s career took another turn by 2010, as she became a personal trainer and joined Velocity Sports Performance and Athletes Performance.

This led to her assisting NFL, FIBA and collegiate athletes as a strength and conditioning coach. The same year she joined the Texas Legends—the Dallas Mavericks G League affiliate—as the athletic trainer’s assistant.

In 2012 she ran the Dallas Diesel Basketball Men’s program, handling recruiting, coaching and a plethora of other responsibilities.

She later worked at the NBA Summer League for two years scouting for an agency and then spent three years working directly with the NBA Las Vegas Summer League.

Gayler’s most recent work comes with the recent NBA Champions Milwaukee Bucks, where she worked in basketball operations with an emphasis on scouting.

It’s been a quick transition for Gayler, as she got into town Monday, found a home Tuesday, met the team last night and is now being introduced to the masses.

“Yes [it’s maybe been a little bit of] a whirlwind, but it has been so good,” Gayler said. “Everyone has been so helpful in every aspect and I couldn’t ask for anything better honestly.”

Obviously in a great situation with one of the most successful NBA organizations at the moment, Gayler said it was the opportunity to do what she truly loved that led to her making her way to Brescia University.

Gayler had no intentions of leaving Milwaukee, but when she found out about the coaching vacancy, she knew she couldn’t pass it up.

“This opportunity, honestly, I saw it and it fell in my lap and I was like you know what, I’m going to go for it,” Gayler said. “At that point I wasn’t even in the mindset of leaving, but I’m a coach at heart and I saw the opportunity and I just jumped on it.”

While Gayler is extremely honored to be the first woman men’s basketball head coach in NAIA history, to her this is just run of the mill as she has proved she is a coach that can lead men’s teams to success.

“There’s two aspects to that,” Gayler said. “I’m so blessed and I’m so excited to be a part of that and [thankful] again for Dr. Clary and Father Larry have that confidence in me. But also, I’ve been coaching for 13 years and I’ve been a part of the men’s program for the last 12, so it’s just another Friday.”

Gayler said that her desk is currently covered in post-it notes and she’s hoping to take one off every chance possible, taking things one step at a time.

The biggest thing that she wants to do with the program is not only win, but really help the student athletes grow as individuals.

“College athletics is a lifestyle,” Gayler said. “It is student athlete centered and we have their best interests in mind. We want them to be the best versions of themselves. We want them to leave here being good people.”

This is something that Father Larry Hostetter prioritized during the candidate search and said that Gayler definitely fit the mold.

“From my perspective, obviously, athletics always like to win,” Hostetter said. “But at the core for me and the university, athletics is all about helping our students to develop their character and develop the life skills they need to be successful wherever they might be after they graduate from here.”

Hostetter said that her miles upon miles of experience with a myriad of different positions and programs also set her apart from the rest.

“I think her experience in the world of basketball,” Hostetter said. “I think she just has a ton of experience and you’ve heard her speak. She presents herself very well and understands how to help us understand what she brings to the program.”

All in all, Gayler is focused on helping the athletic department and its individual programs come together as one in order to help breed success and bright futures for Brescia’s student-athletes.

“I love community [involvement],” Gayler said. “I want to make sure that we are getting out there and showing our faces and just being around people and the fans and saying thank you. Also, [I want to] build camaraderie within the athletic department. I’m big on team building.”

Thank you for supporting independent journalism in Owensboro.