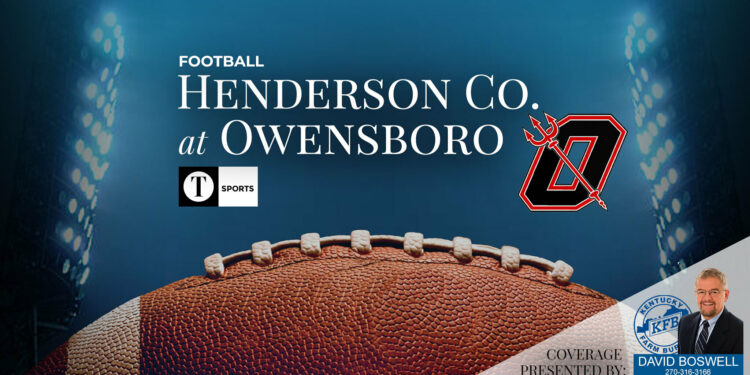 Owensboro football will look to take down rival Henderson County on Friday, looking to extend its winning streak to nine games.

The Red Devils are coming off a strong performance, as their defense led the charge en route to a 58-7 victory over Grayson County.

This turned into a number of touchdowns, while the special teams and offense thrived off the Red Devils defensive energy.

Offensively Boone had a solid game passing, throwing for 89 yards and two touchdowns on 4-4 passing, while freshman Deion Winstead and senior Tramel Barksdale held down the duties in the backfield.

They’ll be tasked with a Henderson County team that snapped its two-game losing streak against McCracken County with a 43-19 win.

They also have a strong backfield made up of juniors Jordan Wright (75.9) and Jaheim Williams (68.7), as they combine for 143 rushing yards per game.

With the postseason quickly approaching Owensboro Head Coach Jay Fallin said that they have to be able to continue to put together complete games week in and week out.

“As we near the end of the regular season, we want to be sharp in all 3 phases of the game from start to finish,” Fallin said. “So often in late round post-season games, the team that wins is the team that makes the fewest mistakes. That isn’t a switch that can simply be turned on when it comes playoff time. We need to be getting closer every week to executing and playing ‘clean’ for 48 minutes.”

On both sides of the ball Fallin said they have to be strong up front in order to not let Henderson County create chaos offensively or defensively.

“The Colonels are as good up front on both sides of the ball as anyone we have faced,” Fallin said. “We will need to play well on the offensive and defensive line and understand our assignments.”

Fallin said as long as they can play focused and adjust when necessary on Friday, they can take down Henderson County and grab bragging rights this year.

“This is one of the oldest rivalries in the state and it means a great deal to both teams, schools, and communities,” Fallin said. “We need to be prepared to play hard for 48 minutes.”

A win for Owensboro would be huge for RPI purposes, as they are set to host the Colonels at 7 p.m. on Friday at Rash Stadium.