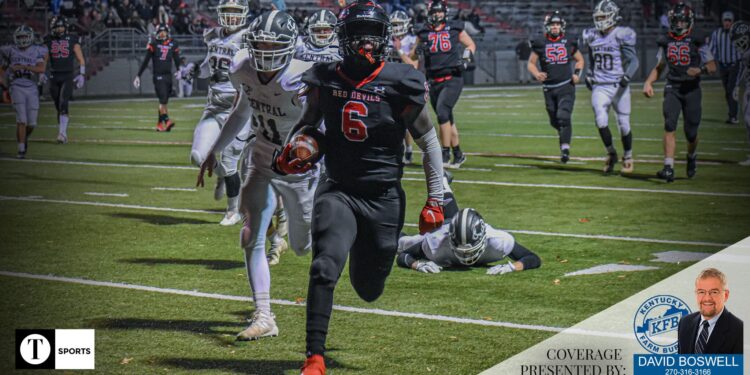 The Red Devils secured their spot in the final four on Friday, with an all-around team performance resulting in a 56-12 win over Bullitt Central.

Owensboro opened up play with a near interception on defense, before Bullitt Central punted to put them on the 49.

They weren’t able to get much going, but junior quarterback Kasey Boone nearly hit his target on fourth and nine for a touchdown. The throw was just short and the Cougars took over at the 37.

After another solid defensive possession for the Red Devils, senior Maurice Moorman took the punt 57 yards to the house to give them a 7-0 lead with 6:28 left in the first quarter.

On the ensuing drive junior Kanye Johnson went soaring to make an interception and gave Owensboro another chance to swing momentum even more in its favor.

Senior running back Tramel Barksdale made the most of this opportunity, taking a handoff 23 yards to the endzone to make it a 14-0 game with 3:42 left in the first quarter.

The Red Devils continued to expand on their lead early in the second quarter, as a screen pass freed up junior Jeremiah Goodwin for a 67-yard touchdown to take a 21-0 lead.

After tipping Bullitt Central’s punt on the following drive, Boone needed one play to hit junior Ethan Pendleton with a 29-yard dime to make it a 28-0 game.

Minutes later the Red Devils struck again thanks to a 29-yard run for Barksdale. The two-point conversion succeeded, but a penalty brought it back and then the extra point was blocked.

This had Owensboro nearly going into the locker room unscathed with a 34-0 lead, but a three-yard rushing touchdown by senior Zachary Shofner put the Cougars on the board.

The two-point conversion was no good and the Red Devils held a 34-6 lead with 9.5 seconds left in the first half.

With Bullitt Central nearly avoiding a running clock, Moorman had other ideas and returned the kickoff for a touchdown. Boone hit senior Kenyatta Carbon on the following play for the two-point conversion and a 42-6 lead going into the second half.

It was Carbon striking again to start the second half for Owensboro as a 52-yard run on its first play gave them a 49-6 lead.

With the running clock in play, the Red Devils continued to stifle the Cougars’ offense while making pushes offensively when they had the chance.

Freshman Trevor Delacey got in on the action in the fourth quarter, hitting senior Taquan Robinson for a 21-yard touchdown to make it a 56-6 game with 10:57 left to play.

Bullitt Central was able to score one last time with a 10-yard rush from Shofner with 2:13 left to play, with the two-point conversion being shut down.

This allowed Owensboro to run out the clock, advancing to the final four of the state tournament with a 56-12 win over the Cougars.

Bullitt Central might’ve stopped the Red Devils on their opening drive, but once they got started there was no stopping them.

“Just proud of the way we executed,” Head Coach Jay Fallin said. “They stopped us early on our first series. They’re big and strong up front and we knew there was a good chance that that might happen. We have to be able to weather that storm, keep playing and we did that.”

Barksdale led the way offensively with 101 rushing yards and two touchdowns on 11 carries, while Carbon followed closely behind with 72 yards and a touchdown on two carries.

Boone had another solid game under center, throwing for 120 yards and two touchdowns on 4-9 passing.

Moorman also had another strong game on special teams, returning a kickoff and a punt for a touchdown.

With he and junior Khalil Rogers continually earning mounds of yardage and touchdowns on special teams, the Red Devils have ample offensive weapons in their holster.

“It’s a potent weapon,” Fallin said. “First of all, the advantage shows up on the scoreboard obviously. But one of the things that may not be seen in that, is that your opponent has to spend a lot of time in practice working on that. Which [that] maybe takes away from something else they’d like to be working on.”

Meanwhile, Owensboro’s defense was able to limit Shofner in the backfield and make the Cougars passing game practically obsolete with 36 yards and two interceptions on the night.

The win gives the Red Devils its third straight region championship, something that Fallin and company are very excited about. However, they don’t want the winning train to stop here.

“It’s quite an accomplishment to go to three straight semifinals,” Fallin said. “Very proud of that of course. We’ll celebrate it tonight, we’ll be happy tonight but when the sun rises we’ve gotta move on.”

Owensboro will have the chance to do just that next week when it makes its way to take on Frederick Douglass next Friday at 7 p.m.