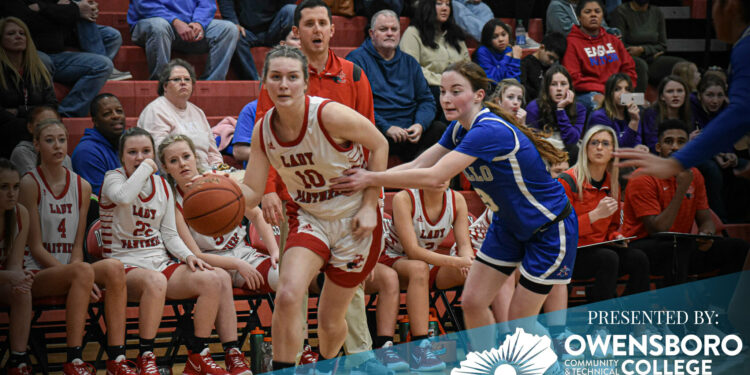 The trio of seniors Amaya Curry and Shelbie Beatty and sophomore Jenna Dant dominated the game offensively, leading Apollo to a 50-44 win over the Lady Panthers.

The E-gals came ready to play right out of the gate, dissecting Daviess County’s fullcourt pressure with disciplined offense.

Apollo’s defense also created a number of turnovers, helping them get to the basket or the line over and over again as they took a 15-4 lead into the second quarter.

“Our defense was very active and anticipating, talking on defense,” Payne said. “Just getting early stops, it allowed us to get out and run a little bit.”

The Lady Panthers offensive struggles carried over, until late in the second quarter. They made a late 6-0 run in the final minutes of the first half, but the hole they dug themselves required some more work.

Sophomore Jenna Dant was a major reason for their offensive success accounting for 11 points in the first half by being a strong paint presence.

“Jenna Dant was key early in the game,” Payne said. “She was active on the boards and gave us some second opportunities to score… She’s so athletic and a magnet to the ball.”

“We let their pressure get to us a little bit, we got out of our offense, took some bad shots,” Haile said. “The second quarter we had some better shots, but they didn’t go in.”

The Lady Panthers defense was able to keep Apollo at bay in the third quarter, making it much more difficult for them to have a free-flowing offense that worked from the inside out. This helped their offense gain a little momentum, but Daviess County still trailed 35-26 going into the fourth.

It seemed as though the E-gals would walk away with an easy win, but they never truly put the Lady Panthers to rest. Daviess County forced a number of turnovers and got some key buckets, including a three from junior Carley Paige that cut it to 47-42 with 22 seconds left.

However, that basket didn’t sway enough momentum, as Apollo sank free throws—senior Amaya Curry going 7-9 herself—and was able to hold on for the 50-44 win.

Curry led all scorers with 21 points, while Dant followed with 17 points and 10 rebounds and senior Shelbie Beatty chipped in 12 points and eight rebounds. The trio of E-gals combined for all of their offense on the night, something that Payne and company know is a possibility while working on their rotation.

“Those three have a lot to do with our offense,” Payne said. “We’ve got some key injuries right now, we’re just trying different people to try and get a rotation.”

The E-gals got a good contribution from junior K’Asia Palmer off the bench, as she grabbed 13 rebounds despite not scoring in the game.

Senior Katie Mewes led Daviess County with 13 points, while junior Adylan Ayer closed out the game with 10 points as the only other Lady Panther in double figures.

Daviess County had its six-game winning streak snapped with the loss and fell to 10-5 overall and on the season. Haile isn’t hanging his head though, saying that they were just a good start away from having a different result.

“Besides the first three minutes of the game, we were right in our game,” Haile said. “We didn’t execute the gameplan to start the game. We let one bump and we took a bad shot or made a bad pass. We didn’t play well to start the game and that cost us.”

The Lady Panthers will look to turn the tide with a quick turnaround, as they will battle with Trigg County at noon on Saturday.

On the other hand Apollo now moves to 8-8 on the season and will look to stay strong when they return to action Monday against Evansville Bosse at 6 p.m.