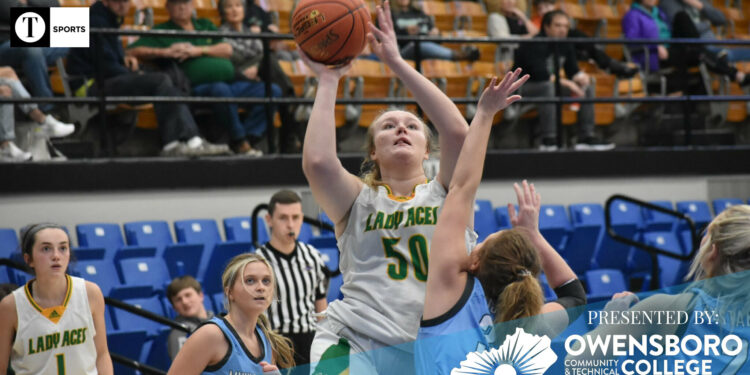 Local basketball thrived in their respective matchups on Friday, as Owensboro Catholic, Apollo, Daviess County and Owensboro all came away with double-digit victories.

Owensboro Catholic set the tone right out of the gate, applying fullcourt pressure to rush the Lady Mustangs offense. This led to a barrage of turnovers turning into transition buckets for the Lady Aces, as they jumped out to a 19-8 lead following the first quarter.

The second and third quarter is where Owensboro Catholic separated itself from its competition, outsourcing the Lady Mustangs 32-4 over the two quarters to take a 51-12 lead into the fourth.

The Lady Aces were only able to score five points in the fourth, but their lead was insurmountable enough as they waltzed to a 56-22 win.

Sophomore Hailee Johnson led all scorers with 14 points, while freshman Karmin Riley and junior Lauren Keelin both finished with 11 points each.

Owensboro Catholic now sits at 13-5 overall and will look to stay undefeated in district play on Friday, as they are set for a battle with Owensboro at 5:30 p.m.

Holding the Lady Colonels to single digits in the second and fourth quarter helped the E-gals earn a 58-45 win on Tuesday, marking the first time Apollo has defeated Henderson County since 2017.

Apollo got out to a narrow 14-11 lead following the first quarter, as senior Amaya Curry and sophomore Jenna Dant supplied 11 of the team’s points. Curry had six points, while Dant earned all five of her points at the charity stripe.

Senior Shelbie Beatty got more in on the action in the second quarter, as the trio of E-gals helped expand their lead by combining for all 16 points. Holding the Lady Colonels to just eight points, they went into halftime owning a 30-19 lead.

Henderson County made up some ground in the third quarter thanks to a boost from senior Kaytlan Kemp, finding themselves down 42-37 going into the fourth.

Beatty helped Apollo shut the door in the fourth, scoring 11 of the team’s 16 points while Curry and Dant combined for the other five. Holding Henderson County to eight points once again, the E-gals grabbed a momentous win for the program at a score of 58-45.

Apollo now sits at 7–9 overall and will look to carry its momentum into a district matchup with Daviess County on Friday, as they will go to battle on the road at 5:30 p.m.

The Lady Panthers put a dominant display on both ends of the floor on Tuesday, earning a 52-21 win over Grayson County.

Holding the Lady Cougars to five points in the first, senior Katie Mewes scored all but three of Daviess County’s points en route to an 11-5 lead going into the second.

The Lady Panthers offense stayed consistent in the second quarter, while nearly holding Grayson County scoreless as they took a 21-7 lead at halftime.

Coming out of the locker room, Mewes led the charge for Daviess County offensively as it continued to expand its lead.

The Lady Panthers continued to put the pedal to the metal in the fourth quarter, holding the Lady Cougars to five points as they closed out the 52-21 victory.

Mewes led all scorers with 20 points on the night, while freshman Lily Hoagland was the only other player in double figures with 11 points.

Now owning a six-game winning streak and improving to 10-4 overall on the season, Daviess County will look to carry its momentum into a home district matchup with Apollo at 5:30 p.m. on Friday.

The Lady Devils stayed strong on Tuesday, now owning its longest winning streak of the season by defeating Union County 54-38.

Owensboro jumped to an early lead thanks to its defense that badgered the Bravettes offense, as they were held to single digits in the first and second quarter.

Getting 10 points each from sophomore A’Lyrica Hughes and junior Chandler Worth, the Lady Devils went into halftime with a 27-13 lead.

It was a back-and-forth affair in the second half, as Owensboro and Union County had nearly identical halves. The Lady Devils had the slight edge, outscoring the Bravettes 27-25 as they grabbed the 54-38 win.

Hughes led all scorers with 21 points on the night, while Worth and junior Lindsey Gibson both finished with 10 points each.

The victory extends Owensboro’s winning streak to four games, as they improve to 10-8 overall on the season. The Lady Devils will look to stay strong on Friday, hoping to secure its first district win of the season when they host Owensboro Catholic at 5:30 p.m. on Friday.