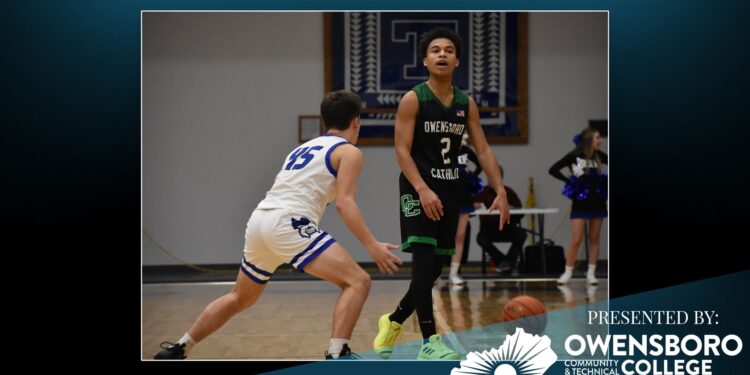 The Aces got dominant performances from juniors Parker Gray and Ji Webb, helping them fight off the Raiders with a disruptive defense that led to a fast-paced offense and an 80-61 win.

Trinity got out to a nice start getting a couple of threes from junior Nathan Hernandez. Pair that with Webb who was struggling to finish some looks at the rim for Catholic and the Raiders were up 8-6 early. But an 8-2 for the Aces quickly swung momentum, as they took a 14-10 lead into the second quarter.

Turnovers were hurting Trinity in the first half, with many of them being unforced. Along with a strong rebounding advantage, Owensboro Catholic found themselves up 25-16 with 5:18 left in the first half.

The Raiders began to make up some ground with a more aggressive approach offensively, but missing free throws—they shot 6-10 in the second quarter—kept them from making it a one-possession game.

A nice run from Trinity did keep its deficit at single digits, as they went into halftime trailing 33-27.

Defense like this have given the Raiders fits throughout the season, as Head Coach Nathan West said that they habitually become too stagnant in an offense that requires a lot of movement.

“We faced that in the Christmas tournament too and our issue is we tend to just stand,” West said. “Against that you’ve gotta box the guy in with the ball, flash to open space and I told them in the locker room just now that I’d show them on film the gaps where they should be flashing in there.”

Following a timeout for the Raiders, a switch to a 2-3 zone gave them new life and they started fighting their way back into the game.

Webb had come alive in the third quarter—scoring 16 points including a massive dunk on Trinity that could’ve been the proverbial dagger—but a quick technical foul on Webb for yelling after the dunk brought the game to within single digits.

This sparked some newfound intensity for the Raiders as they made it a 57-48 game going into the fourth.

The fourth was a back-and-forth affair, with each team giving an answer to every run that the other had. Trinity was able to cut it to single digits one last time with just under four minutes, but Owensboro Catholic’s ability to create chaos defensively helped them close this one out and earn an 80-61 win.

“I told them before the game, ‘if we guard we’ll win the game,’” Riley said. “That’s the one thing that travels. Defense travels. The first half we didn’t guard. I mean fouling is not a good plan.”

The Aces were able to defend well in the second half and paired with a strong offensive performance they were able to grab the win.

Webb’s massive third quarter helped him bounce back from a rough first half and finish with 26 points on the night.

Meanwhile, Gray quietly matched him by knocking down open threes and forcing turnovers to earn 26 points as well.

“Parker is a scorer,” Riley said. “That dude, he can score the basketball. That’s the one thing he can do [no doubt]. Since the day he walked in the gym he’s been a guy that can put points on the board.”

Webb and Barber also controlled the glass throughout the game, as both finished in double figures for rebounds.

This is something that is frustrating for a team like Trinity that has done a solid job on the boards, but understands just how tough it is when the Aces have twin towers down in the paint.

“One of the things we take pride in is our rebounding,” West said. “We’ve done a pretty good job most of the year. They’re a hard matchup with Ji [who’s] tall, long and KJ’s big and understanding the little details you’ve gotta do against those guys.”

With junior Brian Griffith spearheading the offense now with his time injured in the past, Owensboro Catholic has a three-headed dragon of sorts with Webb and Gray also threatening to change the game every night.

“It’s tough because you’ve gotta give something up,” West said. “So if you try to double Ji you might leave Parker open on the opposite side and you’ve gotta be aware of Brian because he’s a good enough scorer, he can pass, he sees the floor well and he’s so fast. You just try to do your best and take the most away that you can.”

On the other side, Trinity had an extremely balanced attack offensively with four players finishing in double figures.

West said they played a very talented team well, but that they just have to shore up some little things as they progress throughout the season.

They’ll look to do just that over the course of the next week, as the Raiders return to the hardwood on Jan. 14 with a matchup against Edmonson County at 7:30 p.m.

Meanwhile, Owensboro Catholic improves to 6-8 and will return to the hardwood Wednesday as they close out the 3rd Region All A Classic taking on McLean County or Edmonson County.