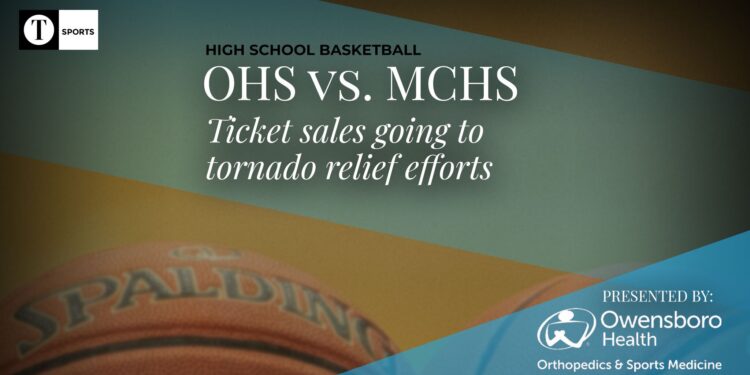 With multiple tornadoes having torn through Western Kentucky in recent times, Owensboro has announced that all ticket sales from its matchup with the defending 3rd Region Champions Muhlenberg County on Friday will be donated to the Muhlenberg County tornado relief efforts.

As two of the strongest teams in the 3rd Region, the Red Devils come into the matchup owning a 10-3 while the Mustangs sit at 5-6.

Owensboro is coming off of a narrow 71-68 victory over Castle that helped them wrap up the Independence Bank Classic with a 2-0 record.

Senior Amari Wales led the way with 27 points in the game, while junior Kenyatta Carbon tallied 19 points and junior Dylon Talbott finished with 16 points. The Red Devils haven’t played since this game on Dec. 30, so they will be well rested for this home matchup.

Meanwhile Muhlenberg County is coming off of a dominant performance against Belleville West, in which they earned a 68-48 win to close out the Centralia Holiday Tournament.

Cole Vincent finished the game with a team-leading 17 points, while Kadin Ray had 13 points and Asher Carver finished with 11 points. The team’s leading scorer in Trey Lovell who averages 12 ppg, was limited to five on the night.

The Mustangs have also been able to rest since Dec. 30, as their game that was scheduled with Evansville Christian on Jan. 4 was canceled.

Knowing that fans from all over Western Kentucky would want to come watch the two battle on the hardwood, Owensboro Athletic Director Todd Harper felt that this would be a great opportunity to raise money for a community that’s been through hard times.

“This is a matchup of two of the best teams in the region and we are expecting a big crowd,” Harper said. “With all that the Muhlenberg County community has been through with the tornadoes, we wanted to show our support any way we could. After speaking with the Muhlenberg County High School Youth Service Center, there is definitely a need for the students in their community.”

Despite the high intensity matchups that have happened between the schools during their rivalry, Harper said that at the end of the day they will be there for the school and its students any chance they are given.

“We are rivals on the court, but we will support them any way we can when we have the opportunity,” Harper said. “We have some great relationships with the Athletic Department and Administration at Muhlenberg County High School and we hope this helps their students in some way.”