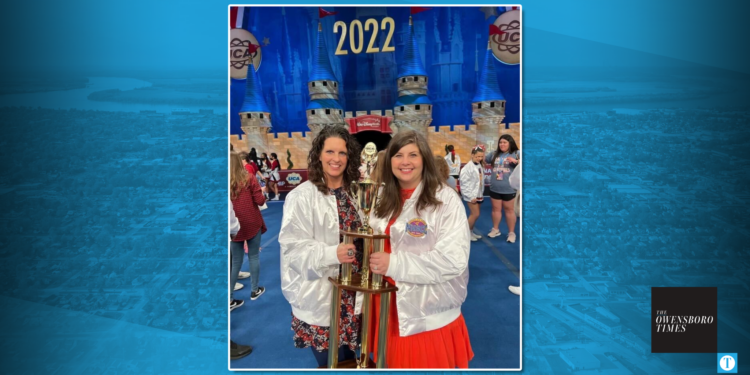 Courtney Gregory is not new to the world of competitive cheerleading. The Owensboro native became a nine-time national champion this weekend at the UCA National Championship at Disney’s Wide World of Sports Complex in Orlando, Florida.

Her first coaching experience was leading a Pop Warner team. Gregory never could have guessed how far her future coaching career would take her.

“I started out coaching the Vikings. I loved watching the kids grow,” Gregory said.

After attending college at the University of Tennessee, her first high school teaching position came with the opportunity to sponsor a club or coach a team.

She agreed to coach cheerleading, which has led to a 25-year-and-counting career.

“I coached for two years in Georgia where cheerleading is sanctioned as a sport,” Gregory said. “I learned a lot about the art of competition coaching during those years. I cut my teeth on competitive cheerleading and when I returned to Tennessee, I brought that with me.”

When Gregory started coaching at Blackman High School in Murfreesboro, Tennessee, in 2002, she entered a season of great growth and accomplishment.

“In 2006, we had a boy try out for the team. He was good and could really tumble,” Gregory said. “I started recruiting a couple boys, football players willing to try it. We experienced regional and state-level success and it became the cool thing for athletes to do as a second sport.”

By 2010, the Blackman Blaze had their first national championship in the small co-ed division. Their most recent victory brought the national title count to nine.

Beyond the victory, Gregory appreciates that her team gains so much more than just the white jackets that they earn for their titles.

“One of my favorite parts of coaching is watching the growth and development of the athletes. Learning the art of discipline takes more than being strong; it isn’t the physical part, it’s being mentally tough as well,” Gregory said.

Watching her team serve the school, support the football team, and stay active in the community are what brings pride to the veteran coach.

“I’m asking them to be all in — one thing bleeds into the other. I’m building a program instead of a team,” Gregory said.

Gregory says one thing that keeps her going after all these years is never being satisfied.

Although she says she knows the day will come where her career will come to a close, that day is not here yet. Ultimately Gregory appreciates both the success of her program and the celebration that goes with it.

“Our school supports us,” she said. “It makes us feel like we are just as important as any other group.”