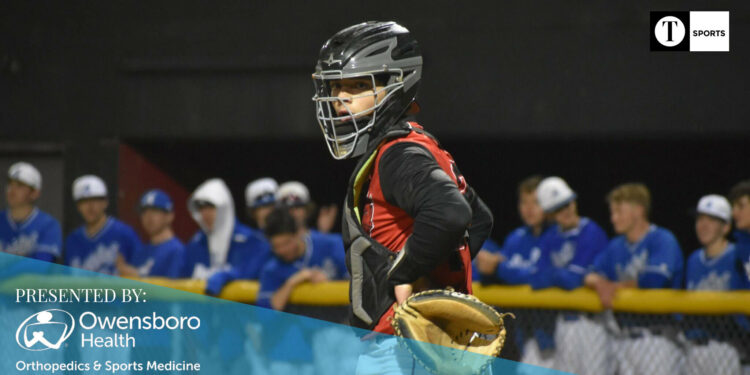 A strong start for the Eagles offensively was the key factor in a 10-5 win to snap a two-game losing streak against Owensboro on Tuesday.

The Red Devils started the game off with a bang, as eighth grader Elijah Hampton sent a solo homer to left in the first at-bat of the game to take a 1-0 lead. However, Apollo responded swiftly to reclaim the lead in the bottom half of the inning.

After a leadoff walk for senior Harrison Bowman, senior Dayton Brown opened up the scoring for the Eagles and knotted things up at 1-1 with an RBI single to center. A single and a walk then loaded the bases with no outs, but an infield fly by sophomore Easton Blandford left it tied with one out.

Another walk brought in the run to give Apollo a 2-1 lead, before sophomore Michael Chaney drove in two on an infield single. The next at-bat sophomore Noah Cook hit an infield single to score a run himself, capping off a strong inning and taking a 5-1 lead going into the second inning.

Owensboro didn’t get down though, getting another long ball—this time a two-run shot by senior Kindrick Williams—and cutting its deficit to 5-3. Back-to-back singles then loaded the bases and freshman Cayden Ray came through and brought in a run to make it a 5-4 game going into the bottom of the second.

However, the offense just kept coming for Apollo, as they grabbed a run in each of the next two innings to carry a 7-4 lead into the fourth inning. With momentum on their side, the Eagles bullpen then took over.

It was a combination of junior Cayden Crabtree, freshman Carter Kimmel, Cook and Bowman who handled the remainder of the game allowing one run on two hits, two walks and striking out seven in the process.

That lone run crossed home in the top sixth as freshman Brady Benjamin scored on a passed ball to cut it to 7-5 entering the bottom half of the inning. But an RBI single by senior Nick Judd and error cost the Red Devils three more runs as Apollo eventually went on to claim a 10-5 win.

On top of the Eagles solid pitching performance, they had six different players record RBIs on the day. Judd and Chaney led the way with two each, while Cook, Brown, junior Josh Mayes and junior Charles Schneider all tallied one each.

Freshman Trevor DeLacey didn’t have his strongest stuff on the bump for Owensboro, giving up seven runs on six hits, four walks and two strikeouts in his three-inning start. Offensively they were led by Williams, who chipped in the two runs via his home run.

The loss moves Owensboro to 9-13 overall and 0-5 in district play, as they will look to bounce back when they host Webster County at 5:30 p.m. on Friday.

Apollo on the other hand improves to 18-10 and 2-3 in district play, as they will round up regular season district play when they host Owensboro Catholic at 7 p.m. on Wednesday.