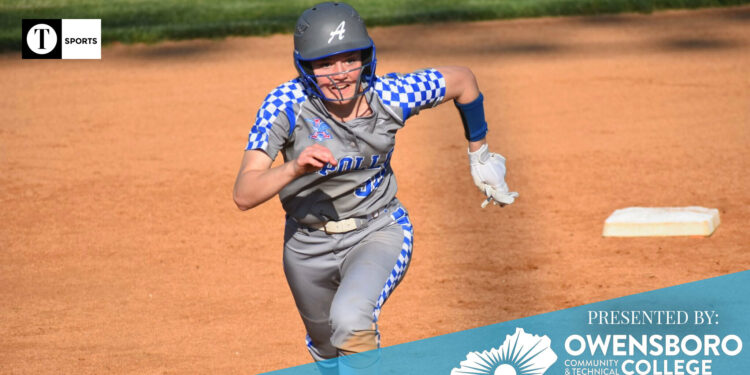 Apollo’s offense was clicking on all cylinders Monday, while the Lady Devils defensive miscues and inability to put together any offense ultimately led to a 12-0 loss.

Taking advantage of an error and a walk to kick off the game, junior K’Asia Palmer looped one to center after sophomore Mallory Velotta stole second to make it a 1-0 game for the E-gals.

A blooper from 8th grader Arianna Ramirez then loaded the bases and junior Emmie Bullington hit a sac fly to make it 2-0. An error on a bunt the following at-bat led to another run scoring, before seventh grader Lily Logsdon and freshman Macy Calhoun hit a sac fly and an RBI single to take a 5-0 lead into the bottom of the first.

The E-gals kept their foot on the gas in the second, capitalizing on a leadoff single and a one-out Owensboro error when junior Morgan Julian scored on a passed ball to make it 6-0.

Back-to-back Apollo errors and Owensboro’s first hit of the game—a single to center from freshman Addison Hill—quickly loaded the bases to give the Lady Devils their first scoring opportunity of the game.

However, Bullington got sophomore Sophie Moorman to strikeout, sending the game into the fourth with the E-gals up 6-0. Ramirez then came through in the top of the fifth, hitting a solo shot to left to make it 7-0. Apollo kept pouring it on in the top of the sixth, grabbing two runs quickly on an error and a single from Frizzell to make it a 9-0 game.

Following an error and a pop out, Ramirez grabbed her second and third RBIs of the game with a double. An RBI groundout by Bullington then capped off a five-run inning as the E-gals took a 12-0 lead into the bottom of the sixth.

This paved the way for Palmer to wrap up her two innings in relief, allowing no runs on no hits, walking one and striking out three en route to the 12-0 district win over the Lady Devils.

Bullington got the start for Apollo, allowing just one hit while striking out three in four innings of work.

Offensively it was Ramirez who led the way for the E-gals with three RBIs, getting one from her sixth home run of the season. The eighth grader has been a sparkplug in Apollo’s lineup all season and Julian said that the future for her is very bright.

“She’s going to be fun to watch for the next four years,” Julian said. “Just an eighth grader, she’s a competitor and has a great swing. You just watch her demeanor and she just carries herself right. She has the potential to be a big-time player. She already is a big time player, but she can be a really big time player.”

Meanwhile, senior Brooklyn Keller didn’t have her best performance in the circle and allowed nine hits and walked two, but her defense didn’t help. The Lady Devils had five errors on the day, making just three of the 12 runs Keller allowed earned.

“The first inning, you can’t start off like that,” Moorman said. “Especially against a team like Apollo with a pitcher like Bullington. You can’t come out and give them runs.”

While Owensboro falls to 8-18 overall and 0-6 in district play, Moorman thinks that they can bounce back and show some poise in the postseason if they get their drive back.

“What I’m looking for personally is the energy to come back,” Moorman said. “It was up before the game, but after that first inning it kind of went away in the dugout. Flat and just couldn’t get it back.”

The Lady Devils will look to snap a three-game losing streak on Tuesday, as they are set to Grayson County at 5:30 p.m.

On the other hand, Apollo improves to 13-12 and 4-2 in district play to secure the No. 2 seed in the 9th District Tournament. With a barrage of tough opponents coming up as the season comes to a close for the E-gals, Julian thinks this will best prepare them when it comes postseason time.

“Every year we try to play some of the best teams in the state to finish it up,” Julian said. “We got Henderson tomorrow, they haven’t been beaten by anybody in Kentucky yet… We’re going to play three teams that are in the Top-10 this last week and if that doesn’t prepare you nothing’s going to.”

Apollo will start the long week with a home game on Tuesday, as they are set to host Henderson County at 5:30 p.m.