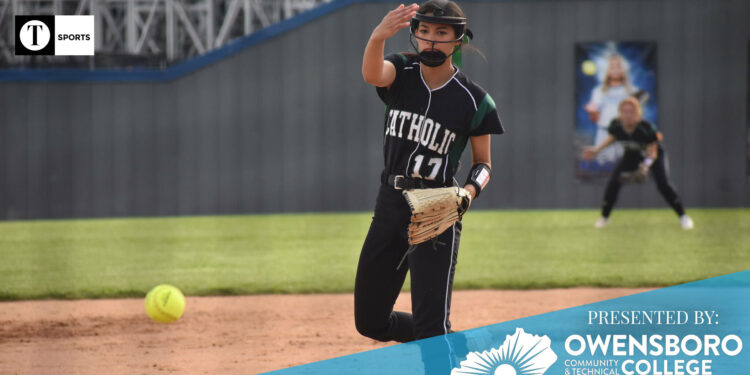 After seven scoreless innings on Monday it was Apollo’s pitching that cracked first, as the Lady Aces offense exploded in the top of the eighth and eventually went on to grab a 7-0 win.

Neither team could figure it out offensively early, as they both went into the third hitless. Owensboro Catholic freshman Tyranda Stuart was able to get the first hit of the game in the top of the third, but she went on to get caught stealing and nothing came of it.

Still tied at 0-0 and looking for their first hit, the E-gals were stifled by junior Alexis Hatchett. She struck out the side in the bottom of the third, striking out a total of six going into the fourth.

Owensboro Catholic tried to take advantage of that momentum from their pitcher, as senior Camille Conkright was able to slice one into center for a double to kick off the fourth.

A groundout moved her to third with one out for junior Addison Tignor, giving the Lady Aces the first real scoring opportunity of the day. But junior Emmie Bullington was able to bear down for Apollo, forcing a groundout and then striking out junior Brooke Hamilton to keep things scoreless.

The E-gals were finally able to get its first hit of the day in the bottom of the fifth, as eighth grader Arianna Ramirez singled to center. With no outs, Bullington came to the plate and popped up to left.

Apollo’s luck in the inning didn’t change either, as junior Morgan Frizzell and senior Courtney Hagan both popped up, keeping things knotted up at 0-0 going into the sixth.

Owensboro Catholic tried to put together a quick two-out rally in the top of the sixth, but Bullington got a big strikeout with two outs and runners on first and second to get out of the jam. Hatchett did the same in the bottom of the sixth, pitching a 1-2-3 inning to keep things scoreless going into the seventh.

Both teams’ offensive struggles continued, as Bullington and Hatchett kept things scoreless to force extra innings. However, the Lady Aces finally found a way to score in the top of the eighth.

After a fly out by Owensboro Catholic to start the inning, Bullington proceeded to walk the next two batters. Junior Addison Tignor delivered the following at-bat, singling to center to take a 1-0 lead while advancing to second on the throw home.

An intentional walk then loaded the bases, which turned into back-to-back infield singles for Brooke Hamilton and Jaiden Grant, as the Lady Aces lead grew to 3-0.

A wild pitch brought another run in before an RBI single to right from Stuart, which was followed by a two-run bloop single to center by junior Abbie Dukate to take a 7-0 lead into the bottom of the eighth.

That would be all she wrote for the E-gals on Monday, as Hatchett got three straight outs after giving up a leadoff single to secure the 7-0 win for Owensboro Catholic.

Hatchett tossed all eight innings for the Lady Aces, only allowing two hits, while not walking any batters and striking out eight on the day. Offensively Addison Tignor, Brooke Hamilton, Jaiden Grant, Stuart and Abbie Dukate were all able to tally an RBI each.

Bullington had a strong day in the circle for Apollo until the eighth inning, as she closed the day by giving up seven runs—two earned—on six hits, while walking six and striking out five on the day. Offensively, Bullington and Ramirez were the only ones with hits for the E-gals.

Apollo falls to 9-11 and 3-2 in district play with the loss, as they will get right back to work on Tuesday when they take on Union County at 6 p.m.

Meanwhile, Owensboro Catholic improves to 18-8 and 3-3 in district, as they’ll look to extend their winning streak to five games when they take on South Spencer at 5:30 p.m. on Tuesday.