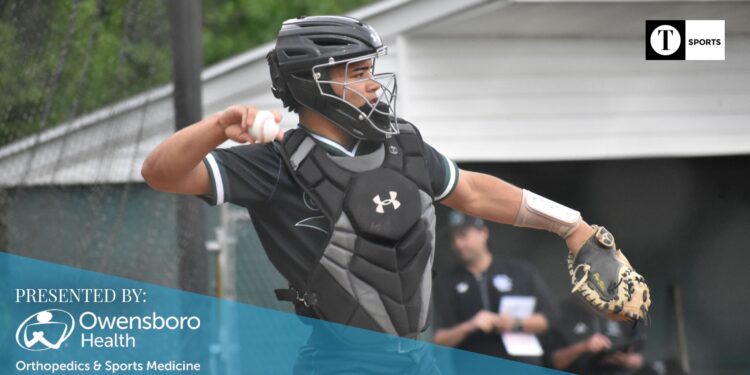 Senior Sam McFarland tossed a complete-game gem for Owensboro Catholic on Thursday while getting plenty of run support en route to a 9-1 district win over the Panthers.

The Aces picked up right where they left off on Wednesday, as senior Luke Evans started the game with a leadoff triple. McFarland then opened up the scoring with a single to left shortly after.

Fellow senior Alex Castlen proceeded to slash one in the right field gap with two outs, leading to a play at the plate in which junior Lincoln Ferguson slid in safely to take a 2-0 lead into the second.

Daviess County was able to get its first hit of the day in the bottom of the second with a single from junior Jackson Loucks, but nothing came of it and Owensboro Catholic hit another gear.

Evans walked to start the top of the third and senior Everett Munsey followed it up with an RBI double. After a single and a walk from McFarland and Mundy, Castlen grabbed his second and third RBIs of the game by slicing a double to left to take a 5-0 lead.

Freshman Brady Atwell kept things going the following at-bat with a two-run single, before junior Grant Parson singled to give the Aces an 8-0 lead.

This would lead to the end of senior Owen Payne’s day on the mound, as surrendered eight hits and seven earned runs in two innings.

Junior Ethan Ahart came in to replace him, but quickly found himself facing Evans with runners in scoring position and one out after surrendering a single to senior John Frey. However, the southpaw struck out Evans and Munsey, escaping the inning but going into the bottom of the third down 8-0.

After the Aces grabbed one more in the top of the fifth on an RBI double from freshman Parker Heistand, Daviess County put together one last attempt at a comeback down 9-0.

McFarland showed his first signs of struggle on the day in the bottom of the sixth, quickly loading the bases after hitting a batter and surrendering back-to-back singles from Troutman and Brubaker.

A grounder to third led to a force out, but junior Layton Huskisson drove in a run in the process to make it a 9-1 game. However, McFarland got a fielder’s choice and a groundout to escape the jam and take the Aces commanding 9-1 lead into the seventh.

This would be more than enough of a lead for McFarland to close out the game, finishing his start having allowed one run on four hits while striking out six en route to the 9-1 win.

McFarland has been a go-to for the Aces amidst their pitching rotation, as he has pitched against the likes of Trinity (Louisville), Pensacola Catholic, Male and stepped up to the occasion once again Thursday when challenged by Head Coach Jody Hamilton.

“Sam’s been challenged all year long,” Hamilton said. “He’s faced probably three of the toughest teams we’ve had. I challenged him a little bit yesterday and said we needed a win. I said ‘will you win’ and he said yes.”

Offensively a number of players got involved for Owensboro Catholic, with Castlen and Atwell leading the way with three and two RBIs respectively. Parson, Heistand and McFarland all chipped in an RBI as well.

While Hamilton has been pleased with the way his team has played for the most part as the regular season is nearing its end, he wants to see the Aces be more prepared from the very first pitch over the next week or so.

“I just wanna get more consistent, especially early in the game,” Hamilton said. “We had two errors in the first inning today and last night in the first inning we had a couple errors. I would like us to come out and relax a little bit and be ready to play right off the bat.”

Meanwhile, Head Coach Austin Clay said that they just weren’t sharp on Thursday and the little things add up when you’re up against tough opponents.

“They’re a good team,” Clay said. “We made some mistakes. When you make some mistakes against a good team you’re not going to give yourself a shot. He’s a good pitcher, commanded two pitches pretty well tonight… I thought they just beat us.”

While Payne didn’t have a strong day his bullpen picked him up, as Ahart and sophomore Lake Wilson combined to allow one earned run in five innings of relief. Offensively Daviess County was led by Huskisson, who had the only RBI of the day.

Despite falling to 18-7 and 4-2 in district play, the Panthers have secured the No. 2 seed for the 9th District Tournament. Clay and company will make sure to strategically plan out their players workload over the next week, but still expects to grab some wins before the tournament gets here.

“We’ve got two more games the next few days, so we don’t have time to dwell on this for too long because baseball can punch you in the mouth real quick,” Clay said. “We’ll line our pitching up for the district tournament to make sure we’re ready to go for it, but we’re still playing hard every game from here on and out. Just moving one game at a time.”

Daviess County will get right back to action on Friday, as they will hit the road to take on Madisonville-North Hopkins at 5:30 p.m.

Owensboro Catholic on the other hand remains undefeated in district play at 5-0, while owning an overall record of 21-4 going into a home game against Muhlenberg County at 5:30 p.m. on Friday.