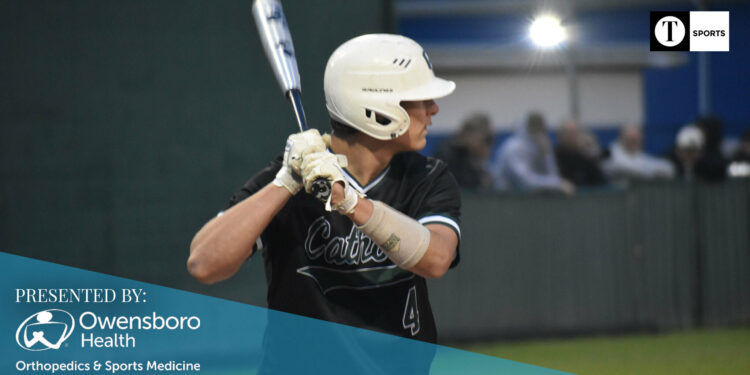 An impressive hitting performance for the Aces and some defensive miscues for Apollo helped Owensboro Catholic remain undefeated in district play with a 9-5 win on Wednesday.

Some small ball helped the Eagles grab the lead early, as senior Harrison Bowman reached on a dropped third strike and found himself at third after an error and a passed ball. This led to him scoring on a groundout to short by senior Nick Judd, going up 1-0 into the second.

Owensboro Catholic answered in the top half of the second, getting an RBI single from senior John Frey to tie it at 1-1.

Seniors Luke Evans and Everett Munsey kept things rolling to start the top of the third, delivering back-to-back singles to grab the Aces first lead of the game at 2-1.

The next at-bat senior Sam McFarland doubled, moving Owensboro Catholic’s lead to 3-1 going into the bottom half of the inning. But Apollo fought back, taking advantage of a one-out error on Ward. With a runner on second after a steal, Bowman sliced one to left to cut their deficit to 3-2.

A fielder’s choice that left everyone safe then put runners on first and second for Judd with one out. He went on to tie the game with a single to center, before a costly error by freshman Parker Heistand allowed the Eagles to take a 4-3 lead.

Senior Hayden Ward managed to work out of the inning, giving the Aces some momentum by killing a bases-loaded jam. This led to offense for Owensboro Catholic in the top of the fourth, as Evans two-out RBI single knotted things up at 4-4.

It seemed as though sophomore Noah Cook had managed to limit the damage to one run as senior Everett Munsey sent a fly ball soaring into the sky in short left field, but some miscommunication led to the ball going untouched for a hit and the Aces taking a 5-4 lead into the bottom of the fourth.

Bowman gave Apollo another scoring opportunity in the bottom half of the inning with a two-out triple, but Brown proceeded to fly out to leave them trailing 5-4 heading into the fifth.

Owensboro Catholic wasn’t done yet offensively, starting a rally with a walk and infield single for McFarland and Mundy in the top of the fifth. After a steal, senior Alex Castlen drove both in with a single to left.

Junior Aiden Wells would go to the mound to replace Cook the following at-bat, but loaded the bases after hitting Heistand on a full count. Evans nearly smashed a grand slam to left shortly after, but it went foul by a hair.

However, Evans’ walk followed by a wild pitch led to two more runs and a 9-4 lead for the Aces. Wells’ day on the mound came to a close after walking Munsey to load the bases once again got Owensboro Catholic and junior Cayden Crabtree came in clutch for the Eagles, getting a fly out to center to end the inning. But the Eagles were never able to gain any traction offensively, scoring one in the bottom of the seventh before ultimately falling to the Aces.

Ward did a solid job of keeping Apollo at bay in his start, as he allowed three earned runs on five hits, walking none and striking out eight in six innings. Owensboro Catholic Head Coach Jody Hamilton said that while he wasn’t happy with the defense behind him at times, Ward and his teammates all fought for the win.

“I thought Hayden did a good job,” Hamilton said. “He actually had pretty good stuff. We kicked it around a little bit… but I liked the way we battled.”

A number of guys got involved offensively for Owensboro Catholic, as the senior trio of Evans, Munsey and Castlen led the way with a pair each. This was another strong game in a string of impressive performances by Evans and Hamilton gave the infielder high praise.

“I gotta say this,” Hamilton said. “I don’t think I have seen a better player than our No. 5 (Luke Evans) all year long. He has been big. If you look around, he’s done something and he had another nice game tonight.”

It was a select few contributing offensively for Apollo, as Judd had three RBIs and Bowman had one on the day. Meanwhile, Cook didn’t have his best stuff in the start as he gave up eight earned on nine hits, walked two and struck out six in 4 ⅔ innings.

Apollo Head Coach Mason Head felt like they had some bright spots throughout the night, but knows they still have more work to do to put together a complete game to grab some wins.

“[We were] better, but nowhere close,” Head said. We saw glimpses of what we want to see today… I’m a broken record. I’m just waiting for us to play a clean seven… You can’t take anything away from what Catholic did at the plate tonight. Their two-strike approach was phenomenal.”

The Aces improve to 20-4 overall and 4-0 in district play with the win and have a quick turnaround, as they will look to remain undefeated in district play against Daviess County at 7 p.m. on Thursday.

The Eagles on the other hand fall to 18-11 and 3-3 in district play, with Head and company hopeful for a winning streak to form as the season nears its end.

“We’ve got nine days to fix about two or three aspects of our game,” Head said. “[We want to]  try and put a run together. I think the pieces are there and we’re certainly capable of doing all of those things.”