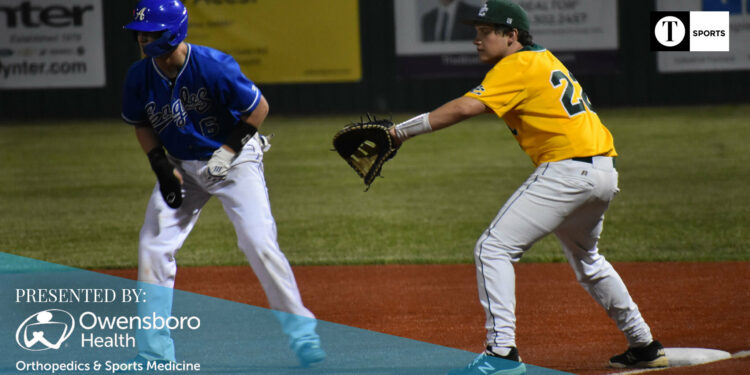 Defensive miscues and the inability to get any offensive momentum going led to Apollo’s demise on Monday, as the Aces put on a clinic to grab a 10-1 win to stay undefeated in district play.

A barrage of singles and walks allowed Owensboro Catholic to take command of the game early. The first run of the game scored on an Eagles error, while senior Braden Mundy and freshman Brady Atwell followed with RBI singles to take a 3-0 lead into the second.

Apollo took advantage of an error to get one back in the top of the third on a fielder’s choice, but the Aces responded swiftly to kill any momentum. They rattled off three more runs in the bottom of the third, getting back-to-back-to-back RBI singles from Atwell, YEAR J Crabtree, YEAR John Frey to take a 6-1 lead.

This gave senior Alex Castlen all the juice he needed on the mound, as he went on to hold Apollo scoreless for the next three innings. He finished the day having allowed one unearned run and three hits, while striking out seven in six innings.

Head Coach Jody Hamilton was pleased with the upperclassmen’s efforts on the mound, knowing that he battled for the win without all of his tools of the trade clicking.

“I thought Alex did a good job,” Hamilton said. “I don’t think he had his best stuff. He didn’t have much off-speed stuff at all. Just couldn’t locate it, couldn’t get on top of it. But he battled and stood up there when he needed to so I was pleased with that.”

Having grabbed two more runs in the bottom of the fifth and sixth, senior Everett Munsey entered the game in the seventh and shut the door on a 10-1 district victory over the Eagles.

Five different players recorded RBIs for Owensboro Catholic on Monday, with Atwell leading the way with a pair. For Apollo, they didn’t have a single RBI while junior Nick Judd (2-2) and sophomore Michael Chaney (1-3) combined for all three of the team’s hits.

The Eagles have lost consecutive district games to put them at 17-10 and 1-3 in district play, as they will hope to bounce back when they take on Owensboro on Tuesday at 7 p.m.

The Aces improve to 19-4 and 3-0 in district play with the win, as Hamilton says they will get right back to work on their day off and get prepared for another district bout against Apollo at 7 p.m. on Wednesday.

“We just turn the page and go to the next day,” Hamilton said. “That’s all you can do. It’s a long season and hopefully we’re building [well] for the end of the season.”