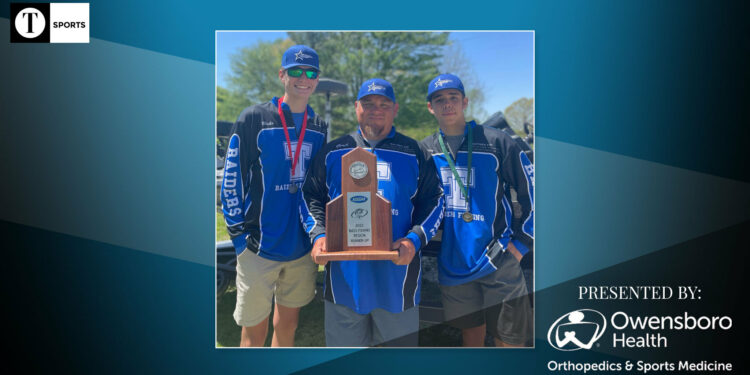 Trinity’s (Whitesville) bass fishing program has set the precedent for the future, earning region runner-up at the KHSAA Region Tournament in its first year.

Competing against 27 schools and 102 teams the Raiders were led by Carson Fitzgerald and Blake McBrayer, with Fitzgerald placing first in the big bass division. Isaac Reed and Nathan Wathen also just missed the cut for state finals, finishing in 26th place to round out the tournament for Trinity.

Fitzgerald was proud of his team’s performance, saying each and every one stepped up when they needed to do and gave it their best.

“Blake McBrayer’s positive attitude and ability to grind all day when fishing was tough and Carson’s fishing ability made the perfect team for this regional competition,” Fitzgerald said. “Isaac Reed and Nathan Wathen came just shy of making it to state. Those boys will be hard to stop in the future.”

Fitzgerald also tipped his cap to the Raiders boat captains, Chachi McBrayer, Jason Reed, Brad Pedley, David Nash and Daren Kinsey, saying that without the sacrificing of their time and resources they couldn’t be as successful.

“I’m very pleased with the way this team has performed,” Fitzgerald said. “There was a huge learning curve for the whole team this year. For boat captains and anglers alike.”

Given the fact that the Trinity bass fishing program was created earlier this year, Fitzgerald said that they have succeeded beyond expectations.

“Oh it’s huge,” Fitzgerald said. “For such a small school to step up and show that we can compete is one thing. But to make the state championship is on another level.”

And while the Raiders have already made a historic run early on in the program’s history, Fitzgerald and company want to extend the strong season with a state title.

“Our ultimate goal is to take home the trophy,” Fitzgerald said. “The next couple of weeks is going to be focused on doing everything in my ability to put us in that position.”