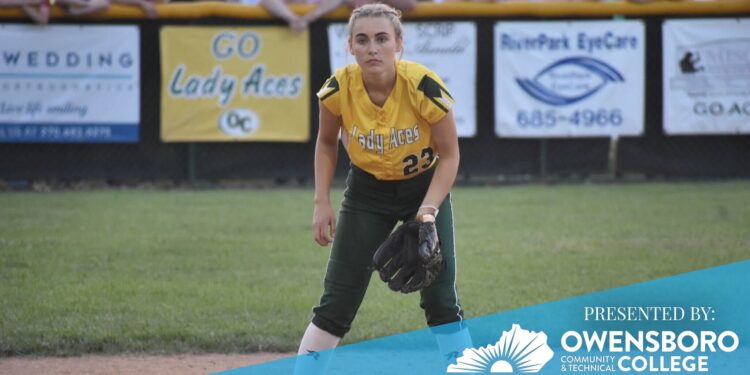 After finishing as a 3rd Region runner-up in the 2021-22 campaign, Owensboro Catholic’s Camille Conkright, Bailey Hamilton, Brooke Hamilton and the Lady Aces coaching staff were given 1A All-State honors.

Conkright finished this season as a key contributor for Owensboro Catholic softball once again, finishing with a .362 batting average, two home runs, 20 RBIs and 14 stolen bases on 14 attempts.

The honor means a lot to Conkright, appreciating being recognized as one of the best players in the commonwealth and knowing that all of her efforts on and off the field have paid off.

“It means a lot to me because I know it makes everyone that has helped me get to this point proud and I’ve worked really hard throughout the years,” Conkright said. “It’s an honor considering all of the other athletes in the state that got it or could have gotten it. I’m just happy that I was considered an all-state athlete in Kentucky.”

Conkright is joined by junior Bailey Hamilton on the First Team All-State, finishing with a team-leading .473 batting average, four home runs, 26 RBIs and five stolen bases. Meanwhile, junior Brooke Hamilton was given honorable mention for her efforts in the circle and at the plate.

Conkright and the Hamilton sisters helped Owensboro Catholic finish 24-15 overall on the season, reaching the district and region championship games. Phelps and company were also recognized for their efforts, having been given the honor of the best coaching staff in the state for 1A softball.

“Since the all-state selections are voted on by coaches across the state, it is truly an honor for our coaching staff to be selected and recognized by them as the 1A Coaching Staff of the Year,” Phelps said. “Our coaching staff has put in countless hours throughout this past season and it is nice to see the work we do become noticed by others. It truly is an honor, and we are humbled by the selection.”

Conkright said that Head Coach Jeremy Phelps and the coaching staff have been instrumental in their success and that she’s grateful for all that they’ve done for her and her teammates.

“I have gotten the opportunity to play for Coach Phelps since I was six and he’s had a huge impact on my softball career,” Conkright said. “When we got to the region championship he knew what he was doing and what we had to do to get to that point and try to come out with a win.”

Conkright is also getting ready to head off to continue her athletic and academic career at Campbellsville University, but said she would be amiss if she didn’t thank Lady Aces softball for the influence it has had on her life.

“Owensboro Catholic softball has had a huge impact on me and has helped me be a better person and player,” Conkright said. “I wouldn’t have done it any differently”