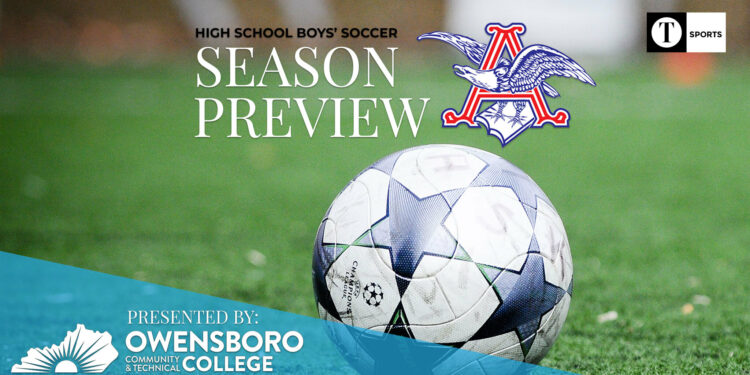 After graduating twelve seniors last year, the Apollo Boys Soccer team is looking to reload their roster for another shot at the 3rd Region Championship.

“We bring back only a couple starters, but several guys who played major minutes,” said head coach Ryan Poirier.

The Eagles are coming off of a season in which they went 13-10 overall and saw their season come to a close in the 3rd Region Championship when they fell to Daviess County 2-1 last season.

The most experienced returner on this Eagles squad will be senior Goalkeeper Steven Teran. Teran has started in goal for the last two seasons, where he led the city last year with 99 saves.

Coach Poirier expects Hunter Dickinson, Dah Hai, and Hsa Than to all step into bigger roles this season on the offensive side of the ball.

Upcoming senior Eh Wah will return after a knee injury cost him the majority of his junior season. He will have the opportunity to fill some of the playmaking roles lost from last year.

“We expect a lot out of some juniors coming up,” Poirier said.“Ra Ne Son, Hayden Hill, and Kaden Phillips all got their feet wet on Varsity last year, and now will look to step in and be major players on varsity.”

The Eagles head coach put a lot of emphasis on the importance of capitalizing on their opportunities this season.

“Last season we had some games where we could have put teams away early, but didn’t always take advantage of our opportunities…we won a lot last year and played great, but there were a lot of games that could have had very different score lines,” said Poirier.

Poirier stated the keys to success for the Eagles this season will be getting his players experience and putting them in the right positions and rotations.

Although there may be some growing pains with the lack of experience on his roster, the Apollo head coach believes his team will be ready when it really matters.

“Early on we know we may have some things to figure out and roles to define, but we feel like we have quite a bit of talent. When we get to postseason time, I expect we will be ready to compete, and the less experienced guys will be ready to go,” said Poirier

Apollo will open up their season by hosting two consecutive district games at home, facing Owensboro on August 11 and Owensboro Catholic on August 18.