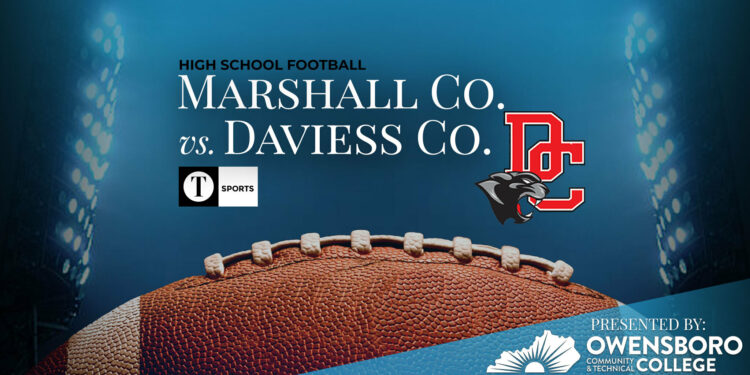 The Daviess County football program had an historic season in 2021, going unbeaten in district play and outscoring district opponents 309-135. The Panthers will hope to replicate said success this week, with the first district matchup of the season on the road against the Marshals

The Panthers open up district play this Friday traveling to Marshall County, who they beat 71-7 last season. It’s a new year, but head coach Matt Brannon believes his team is reloaded and ready to defend their title.

“Every game up to this point has not had any impact on our postseason standings, but now we enter into district play,” said Brannon. “We are focused on defending our district championship, and it starts with Marshall County.”

Daviess County hosted Madisonville-North Hopkins last Friday, where they seamed to be in the driver’s seat much of the game. The Panthers’ defense did not disappoint, adding another five takeaways to their season total.

The offensive side of the ball looked much improved from weeks prior, tallying 368 yards of offense. An interception and a turnover on downs in the redzone, along with two touchdown passes called back made the score seem closer than the game really felt. Daviess County was able to get an important 28-13 win to get some momentum heading into district play.

“We look for our offense to really take strides forward this week, and I hope to see our special teams and defense continue to dominate as they have up to this point,” Brannon said.

The Marshall County Marshals are 3-2 so far on the year and seem to be much improved from a season ago. Marshall County is usually known to be a predominately run heavy team, and this looks to be the case again this season. The Marshals currently have four players averaging over 55 yards rushing per game, with a total of 240 on average as a whole.

“They have had some success early this season, but we feel as if our schedule up to this point has prepared us for a run deep into the playoffs,” Brannon said. “We must be focused once we get to Marshall and execute at a high level, as we did against Madisonville last week.”

Daviess County will embark on another long road trip this Friday, this time to Benton, Kentucky, to take on the Marshals at 7 p.m.