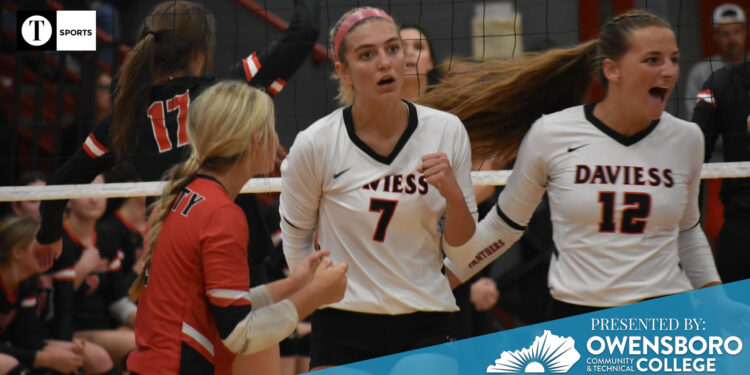 Following another strong season to close out her high school career, Daviess County’s Josie Newcom has been named the Owensboro Times Volleyball Player of the Year for the second time.

“I’m very honored to receive this award,” Newcom said. “There are a lot of talented players on my team and in our area, so it makes it extra special. Hitters sometimes get a lot of the glory, but there are many unsung heroes in this game that make those hits happen.”

Newcom was a menace on the court once again in 2022, leading Daviess County to an 18-12 record with a whopping 400 kills. She was also second on the team in digs with 171, while earning 45 serving aces and 32 blocks in her senior season.

The Lady Panther had three goals coming into the season—improve as an all-around player, become a better leader and win a regional title for the third year in a row. While Newcom and Daviess County fell short of the regional title, she was proud of the way she played this season.

She’s also extremely thankful for the ability to compete and of course her teammates, who have battled alongside her for years. Especially fellow senior and setter Lexi Owen, as the two have been a dynamic duo amongst the 9th District and 3rd Region.

“God has blessed me with the ability to play,” Newcom said. “I have also been extremely  blessed to have some amazing coaches that have invested so much in me and my game. Volleyball is a team sport, so I can’t leave my teammates out of this. While I’ve made a lot of sacrifices along the way, putting in a lot of hard work to develop my game, my teammates have also pushed me and supported me along the way. It also helps to have a talented setter making things happen, and I’ve been fortunate to play with one of the best setters, Lexi Owen.”

Newcom continued to thank all of those involved with the Daviess County volleyball program, saying that this period of her life is one that she will always look back on fondly no matter what the future holds.

“I will always cherish my time as a Daviess County volleyball player,” Newcom said. “I’ve played with many of my teammates since middle school, so watching this chapter come to an end is tough. I’m sure I’ll go on to do many other things in life, but my time as part of this team will always be special to me. I tried to really take it all in this year and not take the time out there for granted. The people surrounding this team and program have helped shape the person I’ve become, and I’m forever grateful.”

Along with her Lady Panthers teammates, Newcom would be remiss to not thank her parents and all of the coaches and teammates she’s had in her volleyball career that have helped her become the player she is today.

“I would like to thank my parents for always pushing me and supporting me while chasing this dream,” Newcom said. “I’d also like to specifically thank my SKEVA coaches (Southern Kentucky Elite Volleyball Academy), Andrew Stewart and Caleb Sheffield (and others), for investing a lot of time in me, and my high school coach, Tyla Bailey. Finally, thanks to all of my teammates for all of the memories, both on and off of the court.”

With her support system behind her, Newcom hopes to keep on striving for greatness in the game of volleyball by planning to play collegiately. She is unsure of where at the moment, as she has a number of offers and a couple more visits to take.