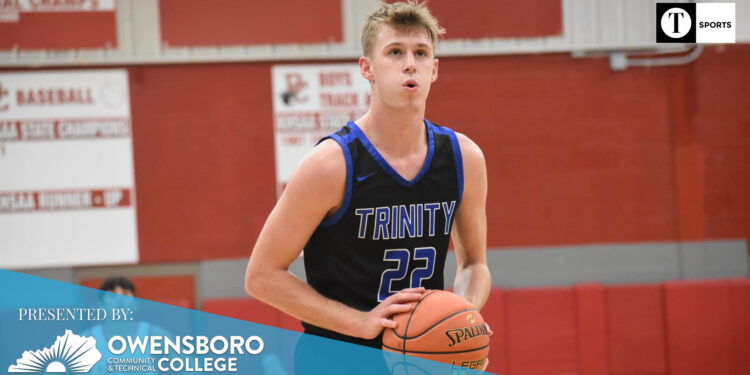 The Panthers couldn’t stifle the Raiders’ offense on Friday night, as Trinity (Whitesville) shot over 60% from the field and had four seniors finish in double figures in their 66-61 season-opening win on the road.

Senior Nate Hernandez opened up the scoring on the night with a three for the Raiders, but Daviess County got one right back from junior Houston Oberst to knot things up. But a quick 4-0 run shortly after followed by an offensive foul on junior Gage Phelps gave Trinity a spark up 7-3 with 5:28 left in the first quarter.

It was the senior trio of Landon Smith (eight points), Hernandez (six points) and Landon Huff  (five points) that got the job done, as they combined for the Raiders points en route to a 19-11 lead at the end of the first. Smith’s effort around the basket and on the glass was key part of the strong start for the Raiders and Head Coach Nathan West said that they expect him to be a force down low this season

“We’ve had a concerted effort getting him in the paint,” West said. “Last year we were 16-16, but our overall field goal percentage wasn’t great. But our shooting was up, so our shooting was better as a team. That’s what kind of carried us, so that was my focus this year—making sure we’ve gotta get more out of him inside so that we can bring more pressure to him and then stretch it out for those shooters. And when they don’t [get it], he’s worked a ton on finishing.”

Trinity took its momentum into the second quarter, as a three from senior Gavin Howard sparked a 7-0 run to take a 26-11 lead with 6:58 left in the first half. The Panthers didn’t back down though, using some fullcourt pressure in order to create turnovers and cut their deficit to 35-30 going into halftime.

Senior Jack Payne helped Daviess County keep making up ground in the third quarter, scoring eight of the team’s 19 points. However, the Raiders didn’t skip a beat offensively, as senior Nolan Mills (nine points) and Huff (seven points) combined for 16 of the team’s 21 points en route to a 56-49 lead going into the fourth.

Whistles filled the arena in the final quarter of play, as both teams began to be more physical as they tried to battle for the win. The Panthers were still trying to grab their first lead of the game, as Phelps made it a one-possession game at 62-59 with a pull-up mid-range jumper with 1:49 to go in the night.

Trinity answered quickly with a layup from Smith, but Phelps continued to lead the charge and give Daviess County a chance to win by drawing a foul and sinking both free throws to make it 64-61 with a minute to go. The Panthers managed to keep the Raiders off the board to get another shot at tying the game, but ran about 20 seconds off of the clock looking for an open shot and Head Coach Neil Hayden called a timeout with 22 seconds to go.

But Daviess County was unable to find the bottom of the net coming out of the timeout, as junior Luke Floyd’s pass was stolen and they were forced to foul. Raiders senior Nick Goetz proceeded to hit the following free throws, putting the finishing touches on a season-opening 66-61 win over the Panthers.

West was pleased with his team’s efforts late, remaining under control and not letting the lead slide when the Panthers tried to switch things up defensively in order to make a comeback.

“We handled some pressure there,” West said. “Especially when things were getting tight. In the past that’s kind of been a big issue for us. These guys know a lot of these guys, it’s kind of the ‘if they don’t go to our school this is where they’re coming.’ So it’s always a big game and just handling the moment and pressure was big for us.”

Huff led the Raiders in scoring with 15 points on the night, finishing through contact well and hitting one three on the night. Mills was close behind with 13 points, while Hernandez and Smith had 12 each.

Trinity also went 8-15 from beyond the arc in the contest, something that West thinks they’ll be able to do consistently this season with a more balanced squad and plenty of experience.

“We’ve got a lot of guys that are returners,” West said. “Nick Goetz led our team in shooting last year at like 34-35%. Nate and Gavin are right behind him at just a little bit over 33 and Landon [Huff] has taken a big step forward. That’s something he’s worked on this summer and he’s been pretty consistent with it in scrimmages and practice. Hayden Aull off the bench, he hit a big three and he’s a good shooter too.”

This is something that the Panthers also did well on the night, hitting seven from beyond the arc. With the roster Daviess County has, Hayden said that they plan to be a perimeter-oriented team this season.

“I think we need to shoot somewhere in the range of 20-plus threes,” Hayden said. “We know we’ve gotta share the ball and we have some guys that can make some shots. We’ve gotta figure out how to get some stops to get in rhythm offensively. I thought we were a little stagnant, especially early. The more the ball moves the better it is for us.”

Phelps led the Panthers with 21 points on the night, while Payne finished with 14 and Oberst went 4-7 from deep for 12 points. Hayden said that Phelps is someone that Daviess County will need from the junior all season long, especially without some key players like senior Cole Burch to start the 2022-23 campaign.

Hayden was pleased with his team’s fight in the game after a rough start, but given that the Raiders shot 61% from the field he knows that Daviess County has some work to do on the defensive end.

“I hated the start that we got, but I liked that we responded,” Hayden said. “I think we gotta shore some things up defensively… We led in every statistical category other than field goal percentage, so we’ve gotta figure out how to get stops.”

The Panthers fall to 1-1 on the season with the loss, now having a few days off before hitting the road to take on Butler County at 7:30 p.m. on Tuesday, Dec. 6. Hayden hopes that they can use the loss as a learning experience to help Daviess County have a strong first month of the season.

“That’s an experienced team,” Hayden said. “We’ve got some guys learning and missing some guys, so for us how we respond to [is key]. I mean we want to win every game we play. December is not an easy month for any team, so hopefully we can get right back to it and figure out how to play to win.”

Meanwhile Trinity wins its first game of the season, coming out on top in an early season 3rd Region battle. West said this is a big win to get the year rolling and is looking forward to seeing what his team can do with a number of games next week, starting with the Raiders first home game at 7 p.m. on Monday, Dec. 5.

“It does [give us confidence],” West said. “We obviously watched them play Edmonson, which is a district rival, so you know we were taking some things from that as well whenever we see them… It’s a great start and it’s a big school versus a small school, so in our community that’s a big deal.”