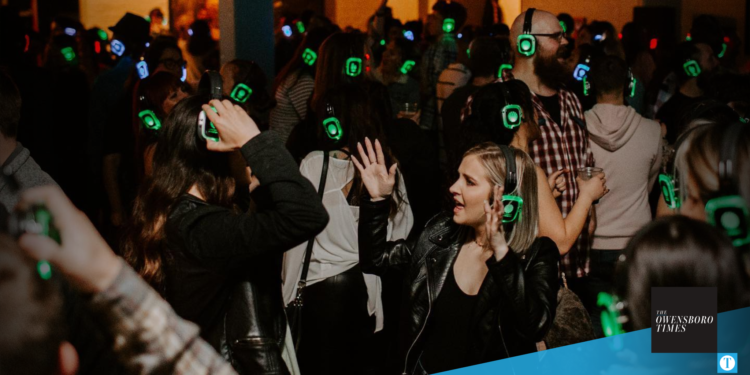 Mile Wide Beer Co. will be closing down a small portion of 2nd Street on Saturday to hold a silent disco dance party from 9 p.m.-midnight. An event that’s become popular in bigger cities, a silent disco provides the unique experience of dancing to music while wearing wireless headphones.

Mile Wide is teaming up with Louisville Silent Disco to hold the third event of its kind in downtown Owensboro. According to Taproom Manager Palmer Dempsey, the City has allowed the brewery to shut down 2nd Street from Mile Wide to Daviess Street for each event.

Dempsey said attendees can choose from three different music stations that are tailored to the crowd. Each channel is color-coded through LED lights on the headphones.

“One channel might play top hits, another hip hop, and another one bluegrass,” Dempsey said. “Each pair of headphones will have blue, green or red lights emitting from them.”

While most outdoor music events can get a little boisterous for those living in the area, downtown residents will never have to worry about a noise ordinance being obstructed with a silent disco event.

And for those participating, the range on the headphones goes a long way — nearly two blocks, according to Dempsey. Up to 600 pairs of headphones will be provided for the silent disco.

“It was crazy fun,” Dempsey said of the most recent event. “I thanked [Louisville Silent Disco] after it was over, saying it was the most fun I’ve ever had in a single night.”

The silent disco dance parties are just one of Mile Wide’s most recent endeavors, as the Owensboro location just began brewing its own beer, much of which will be made exclusively for Owensboro.