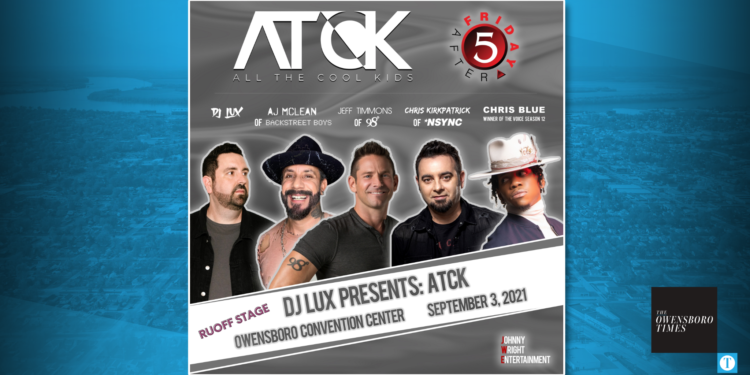 All the Cool Kids promise to mix nostalgia with a little something new in tonight’s “immersive and interactive” show to close out the 25th anniversary season of Friday After 5. Featuring members of the most popular boy bands from the 1990s and 2000s, ATCK will perform from 9:30-11 p.m. on the front lawn of the Owensboro Convention Center.

The show is free, but there will be a ticketed after party will at Mile Wide Beer Co. (tickets here) from 11 p.m. to 1 a.m. Tickets for the party are $50 per person and there’s a max capacity of 125 people.

“We’re excited to bring something really special to Owensboro,” said ATCK founding member DJ Lux (Brandon Mashburn). “We’re also excited to do something special inside of ATCK because it’s going to be the first time in the history of these bands that a member from 98 Degrees, *NSYNC, and Backstreet Boys have performed a song together on stage, and an original song at that.”

The band is set up to allow artists to come and go. Currently, it features world-renowned and Grammy Award winning artists AJ McLean (Backstreet Boys), Jeff Timmons (98 Degrees), and Chris Kirkpatrick (*NSYNC), along with Chris Blue (winner of The Voice Season 12). DJ Lux is also on stage for the performance.

Timmons and Mashburn, in separate phone interviews Thursday, discussed their band and what the crowd can expect from the performance.

Ryan Richardson: What’s the relationship been like with this new band, where you’re each kind of part of different groups and coming together for this?

Jeff Timmons: I mean, a lot of people think that because we are in similar bands at the same time that we’re competitors, but that couldn’t be further from the truth. Chris and AJ and I have a mutual respect for each other because we understand how difficult the business is, and we shared a similar journey — the high highs and low lows. We’ve all always just really gotten along really well and everybody’s got unique and fun personalities. So for us to be able to join forces, sort of, to create a unique sort of experience for our fan bases, we’re loving it.

Brandon Mashburn: Honestly, things have been really great. Every time we talk about it with other teams and other artists about the project, we always get a great response. To be honest, everybody we’ve gone after has wanted to work in some way shape or form and so that’s worked well. … It’s like a group of personalities and now we’re trying to figure out how to squeeze everybody in.

RR: As for the performance, will each of you be doing your own songs, or is it new music?

JT: It’s a combination of both. We each do our own stuff, and then we join each other for stuff. We’ll do the popular hits and then we’ll do original songs as well, so it’s a mix-and-match of all this stuff.

BM: It’s a combination of a lot of great things. The boy band era fans and people who really followed those careers are gonna love it because we pay a lot of homage to them. On top of that, me and my drummer Ryan Stephenson do like a DJ-drummer set that’s gonna have some more of the EDM festival style dance music — things that are a little edgy, a little harder — to kind of tie it all together. It’s a really immersive show, very interactive show.

RR: So originals as in you guys coming together for new songs?

JT: Yes, it’s new stuff. The production is 20-plus years old on a lot of those older songs. The new stuff is our individual voices with more contemporary music, so the production and background is more in line with stuff that could be on the radio today. The three of us have recognizable voices to our fan bases, so you know you’re gonna have a combination of the old school flavor we had with our voices with new production and new tracks.

RR: There’s a private meet-and-greet session and an after party. With the way things have been over the last year or so, how important is for the fans to not only see a show but be able to interact with some of these band members that they’ve loved for years?

JT: I mean that’s that’s kind of one of the most rewarding parts of everything, to be honest with you. It’s cool to get up on stage, but there’s nothing like getting to meet the folks in person. And there’s always great energy with stuff like that.

BM: I think there’s two very important things to take from it. The first is, we’re with you guys. We’re with the fans. We want to get back to normal just as quick as we can and get those great feelings that we’ve all missed from having live performances. The second thing is we’re proud to say that we’ve waited for the right time, we didn’t try to get out too early and risk people’s lives and health. We want everybody to know that safety has always been a number one factor for this project and that’s why we waited till the fall to start doing dates, just to make sure everything was cool.

RR: So what do you hope people take away from this experience?

JT: I want them to see something unique and cool while having some nostalgia and some stuff that they can relate to. A lot of our fans were younger when we were out, and you know they’re older now. We know that our fans enjoy the music with friends they met at concerts and shows, so they share the experience together, they enjoy doing it together. So for us it’s just a spark of a little nostalgia, and add a little new flavor to it. 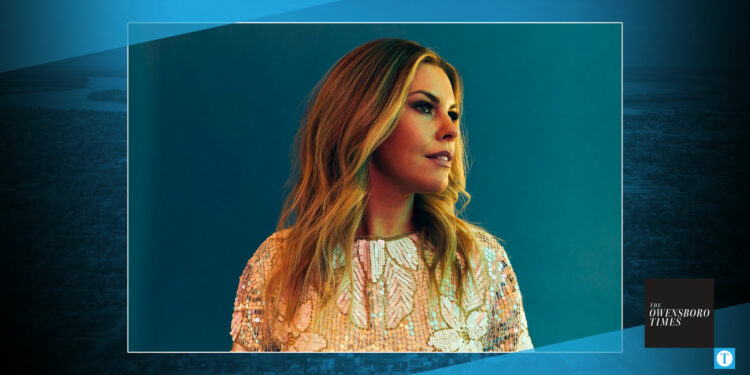 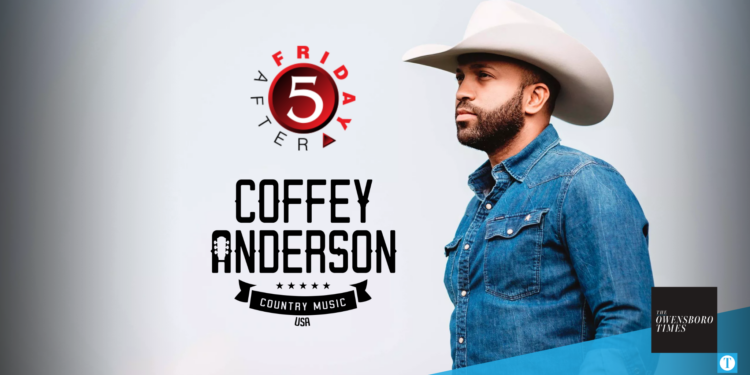 Coffey Anderson excited to perform tonight at Friday After 5