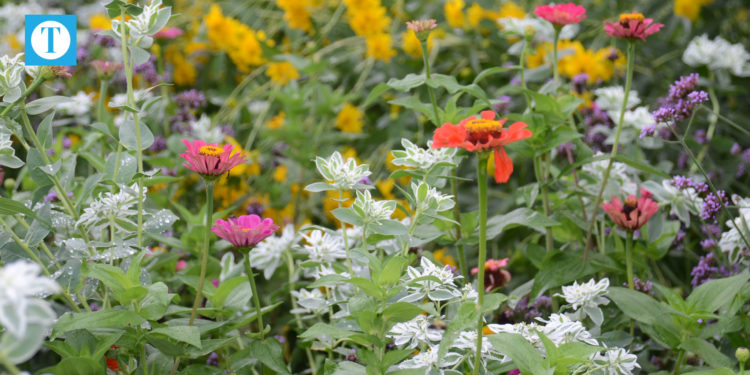 Owensboro’s green getaway began as a modest soybean field — an artificially flat eight acres donated by Susie and William “Bill” Tyler, who owned the nearby WeatherBerry, a historic home built in 1840 that’s now an Airbnb.

“We started with a peculiar business plan. We had no money, just land. We just started planting things with the proposition that if people liked it, they’d follow,” said Dr. Bill Tyler, a retired physician who was a master gardener when they began the project in 1993.

Local gardeners and garden lovers indeed did invest their time, money and hands to help create the idyllic space. To this day, the garden remains primarily community-run and decorated with gifts extending from the Cottage in the Garden to the benches, murals and 20-foot basket sculpture.

The Tyler’s remained at the helm of this community love project for nearly three decades — though they shy away from taking too much credit.

“The volunteers have been a huge element from day one up to today,” said Susie Tyler, who recently retired as director but will have a continued presence in the garden’s future.

In June, Laurna Strehl accepted the position of executive director.

“I hope to continue to be as strong a leader as Susie has been,” said Strehl, who has been a recognized face of the garden for years. “When people see me at the grocery, they associate me with the garden, so it’s been a natural transition.”

An Owensboro native, Strehl moved to San Antonio in the ’90s before returning home in 2010 with inspiration from the Texan botanical gardens.

She sought out Owensboro’s hideaway, met Susie Tyler within her first month back and signed up to volunteer.

“Working closely with Susie helped shape me to develop a genuine passion for this garden. It’s close to my heart,” Strehl said.

Initially, she helped update the garden’s social media — eventually growing their Facebook following from 200 to nearly 5,000 — and helped produce more children’s programming. As the mother to three young children, she knew how important these programs were to the community.

Within five years of volunteering, Strehl joined the board of directors and became a part-time employee.

In her new role, Strehl hopes to create renewed interest in the garden.

At present, the botanical garden shifts attendees’ mood as they stroll atop the dainty paths through thoughtfully-themed plots.

“You go from one section and enter into a surprise in another section,” Bill Tyler said.

There are ornamental grasses, roses encircling a fountain, a mini Japanese floral arrangement honoring local educator Mary Takahashi, a rain garden that sucks up stormwater runoff and a junkyard-scavenged green Volkswagen with hops growing out its trunk — “we think what’s growing out the back could have led to its demise,” Bill Tyler said.

Among popular favorites, the Children’s Garden includes a koi pond, waterfall, “rainbow road” and a maze of butterfly- and hummingbird-attracting plants.

This is one section that Strehl intends to change. At this time, the plan is to transform the maze of holly hedges into a labyrinth where children skip over stepping stones separated with patches of soft grass.

“I want it to be a place of rest for the eyes, a meditative spot,” Strehl said, and “it would be a fun place for kids to run around.”

In addition to the gardens, WKBG boasts several pieces that teach children and adults about clean energy, including a SmartFlower Solar device that follows and absorbs the sun’s rays and a towering windmill that pumps water from the ground into an adjacent retention pond.

“We certainly emphasize learning about nature and the environment,” Bill Tyler said.

There is an educational classroom attached to the indoor conservatory, which houses tropical plants and orchids, for this very purpose — and it’s another area that Strehl hopes to expand in offerings to the community.

Each year, the garden receives about 7,000 or more visitors from across the states. The garden regularly hosts weddings, baby showers and educational events, though the COVID-19 pandemic has halted most of these gatherings.

In coming years, WKBG will work to build the support and funds needed to expand the garden with a pavilion for special events and a welcome center with a gift shop.

It’s a long-term project, with a date currently unknown, but they’re in the stages of design and fundraising now, according to Strehl.

In October, the nonprofit garden will host a virtual fundraiser for the planned upgrades. There will be details posted to their Instagram @WKBGarden and website in several weeks. Along with the Annual Daylily Festival, this will be the garden’s largest fundraiser this year.

“Our expectations are very high for what’s ahead,” Susie Tyler said. “We have so many things on the drawing board.”

Among these expectations, Strehl expressed the desire for people across the U.S. to know WKBG is a destination.

“I want people to think of the garden as a place you have to visit when you’re in Owensboro,” Strehl said. “I’d like to be at the top of the list.”