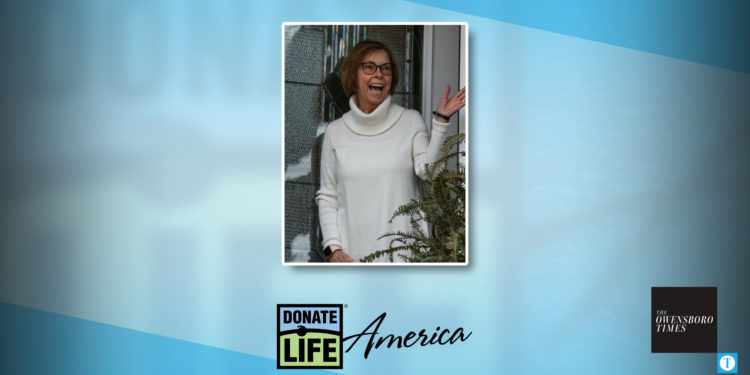 In 2015, Jan Evans discovered that a stubborn cough originated from idiopathic pulmonary fibrosis, a chronic condition that causes progressive and irreversible decline in lung function.

Her only option for long-term survival was a lung transplant, a frightening concept she initially rejected. But after becoming homebound with an oxygen tank, Evans was ready to change her life. She drove north.

The Cleveland Clinic spent 18 months determining if Evans was a good candidate for a transplant.

“They took 23 vials of blood and ran through every test imaginable. They checked every system in my body, including my mental capabilities,” Evans said.

In July, a board of roughly two dozen doctors approved her case and officially added her name to the national transplant waiting list, which contained the names of about 109,000 Americans in September.

Just two weeks after her approval, Evans got the call.

National Donor Day is dedicated to spreading awareness and education about organ, eye and tissue donation, and it’s celebrated annually on Feb. 14.

“We have seen an incredible increase in donations in Kentucky in recent years,” said Shelley Snyder, KODA’s vice president of strategic partnerships. “We are so honored that so many families have said yes to being donors.”

Any adult can register to be an organ, eye and tissue donor at RegisterMe.org, or with a county clerk while renewing their ID or license in person.

Physicians ultimately determine who is eligible for donation, which is quite rare — only 3 in 1,000 people die in a way that allows for organ donation, according to the U.S. Department of Health and Human Services.

The registry provides possibility to folks facing grim realities — an estimated 17 people die each day waiting for a transplant.

If people are not registered, the decision falls to the family. That’s part of the reason the registry is so important, according to Snyder.

Kentucky houses just three transplant centers with the University of Kentucky HealthCare, University of Louisville Health-Jewish Hospital, and Norton Children’s Hospital. But hospitals across the state procure organs and tissues for transplantation.

Owensboro Health Regional Hospital reports all deaths which are imminent or have occurred within the hospital to KODA, as required by federal law. Through September 2020, Owensboro Health identified 12 tissue donors and five organ donors last year. The hospital procured 12 organs for transplantations and four organs were donated to research.

This past Friday, 953 Kentuckians were on the national transplant waiting list in need of a lifesaving organ. Kidneys represent about 80 percent of needed organs nationally, and cornea is the most transplanted tissue.

The waiting list requires chance, and Evans is glad to be on the other side of what was ultimately a 5-year process complicated by the pandemic.

She is once again feeling hopeful for the future and grateful to her family, medical caregivers and donor.

Said Evans: “There are no words to express appreciation for someone that literally saves your life.”