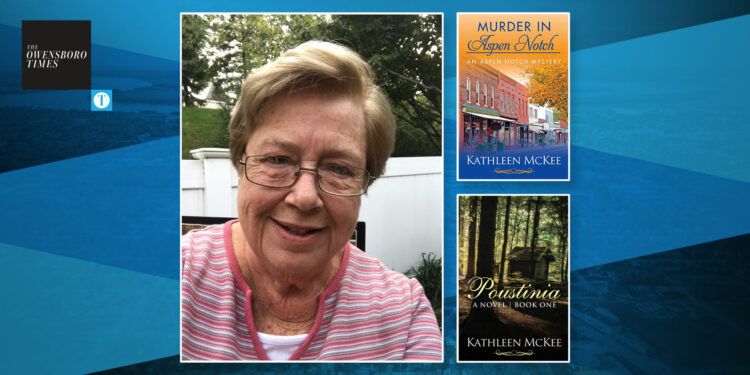 Kathleen McKee did not take retirement easily. She served as Vice President for Academic Affairs at Brescia University from 1999-2004 and also as a dietician for the Carmel Home in the evenings during that time. Since retiring from those roles, she has become an author and is currently finishing her 13th book.

Prior to collegiate administrative work, McKee taught both 1st grade and high school. Always in her mind was the idea of writing a novel. Her students enjoyed the stories that she shared in class over a “boring” lecture and even told her she should write a book. When retirement came, she was ready.

McKee said she first considered getting published the traditional way — finding an agent and waiting for a contract. But she thought she would “die of old age” before that would occur, so she decided to self-publish.

She published Poustina: A Novel in 2016 and a second Poustina book in the same year. She added a third novel to the series in 2017.

“Once I achieved my goal, I had no intention of continuing until friends encouraged me to write a sequel for Poustinia: A Novel,” McKee said. “By then, I really enjoyed the entire process, so I set about writing the next book as I devoured expert advice about self-publishing. I learned the importance of a professional editor and cover designer, social media for marketing, and interactions with other authors. Now, as I finish writing my 13th book, I have no interest in the traditional publishing scene, and I absolutely love the freedom of calling myself an independent author.”

She also has published six books in her Aspen Notch Mystery Series, where uses a small town in the Poconos Mountains of northeast Pennsylvania as her setting for a romance between her main characters.

It’s an area McKee knows personally, as she returned to Pennsylvania after living in Owensboro for 5 years to be closer to her father.

McKee said she loves to share her thoughts in her writing.

“These include the importance of family and friend relationships, which sometimes have become diminished when families become separated by distance, or we live in neighborhoods where no one knows the people who live nearby,” she said.

She also enjoys developing characters throughout a series.

“The whole craft of writing interests me, and I become totally engaged in my story as I picture scenes in my mind,” she said.

McKee plans to continue writing until she loses the touch of creating an enjoyable story. She is currently enjoying crafting the Aspen Notch Series, which she believes appeals to older readers.

“I know my fans are typically female between the ages of 50 and 90 years of age,” she said.

She prefers to write uplifting fiction “with a focus on women of all ages who are strong, generous, compassionate, and capable.”

She has also authored a book about Pete, her Springer Spaniel, which she updated to include not only what she had learned about raising Pete but writing “that dreaded last chapter.”

In March of 2019, McKee brought home Maggie, another Springer Spaniel. On her website, McKee shares stories of Maggie, along with other areas of her life.

McKee said that she has happy memories of living in Owensboro and still has a number of friends living here.

“I could have envisioned spending the rest of my life in Owensboro, but my elderly father needed me closer to home, so I returned to Pennsylvania,” she said. “Perhaps, one of these days, I’ll have a chance to come for a visit.”

All of McKee’s books are available on Amazon.